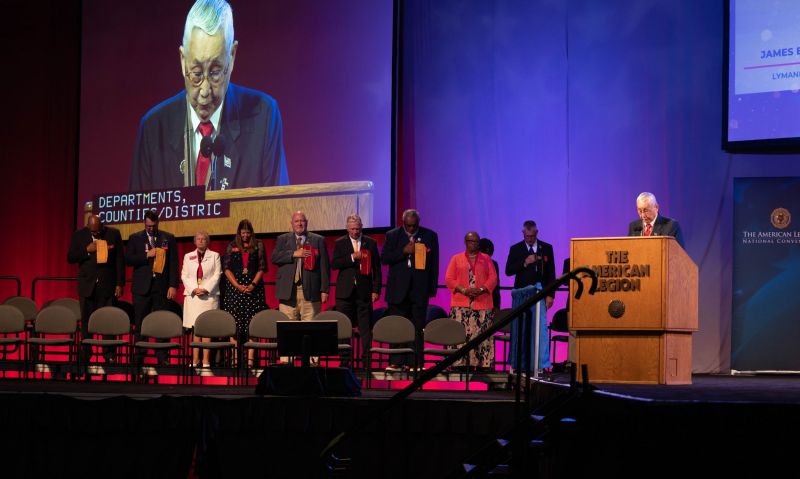 There are two constants in virtually every message that American Legion National Chaplain Stanley K. Hamamoto delivers from the pulpit, podium or stage. The first is a question that rises from his soul and pours down his throat: “Has God been good to you??!!!”

The second is a three-word directive, given with equal passion: “Go to church!”

The Coast Guard veteran and ordained minister of the Christian National Church of Colorado worked his two traditional key points so effectively in Sunday’s patriotic memorial service at the American Legion‘s 103rd National Convention in Milwaukee that the crowd been able to complete the phases for him, in Chorus. Thousands of people gathered to hear his message – dedicated to the memories of American Legion members who transferred to “Post Everlasting” and the legacy they left behind – in a ceremony that included also patriotic and spiritual music from the famous Bel Canto Chorus of Wisconsin, placements of wreaths to honor the dead, lighting of the candle of remembrance by American Legion Boys Nation 2022 President Tamarus Darby Jr., and presentation of the American flag by the Newport Harbor, California, American Legion Post 291 Color Guard. Organist Rick Pedro performed the prelude and postlude.

Chaplain Hamamoto’s message was a tribute to “all members of the American Legion who passed away in the last year… This moment is very sacred, with the almost visible presence of those who have gone before us. Before we have come to honor all who have passed away this year, in the service of the great spiritual army whose (foot falls) makes no sound, but in memory of mankind their souls march on.

In prayer, he insisted that “we pause together in silence of remembrance to linger in thought of our comrades… (who) have been transferred from our ranks to Post Everlasting. Not long ago they stood before us. We laughed with them, worked and lived part of our lives for a common cause. They contributed in some way, big or small, to who we all were when they were among us. At a time like this, we are deeply aware of the Eternal Presence, and as the only remaining link to our fallen comrades, we salute you.

He asked those present to “commit to united service to consecrate and sanctify our fellowship through devotion to caring for each other, to protecting those left behind… May we all feel our comrades during let them rest.”

As the ceremony drew to a close, Chaplain Hamamoto once again reminded the crowd to reflect on their oft-repeated question, “Has God been good to you today?” – and hear his command: “Go to church!”