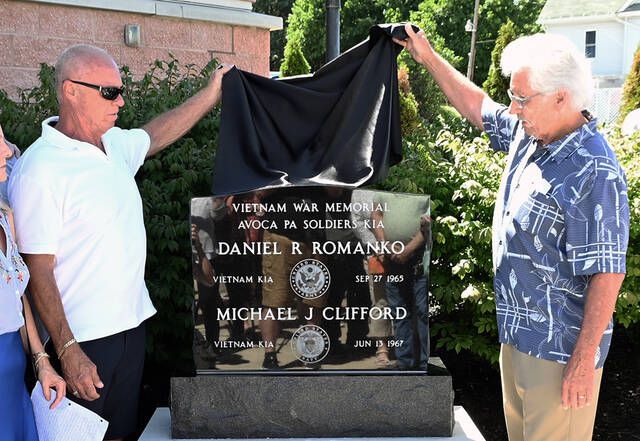 Memorial to Daniel Romanko and Michael Clifford unveiled in ceremony

AVOCA – Emotional pain still runs deep in the hearts of family and friends who gathered at the Avoca Municipal Building on Saturday morning to pay their respects to two indigenous sons who lost their lives in Vietnam more than 55 years ago. and 57 years old.

A monument has been erected and placed in front of the municipal building in plain view for all who pass by on Main Street.

Daniel Romanko and Michael Clifford, were both killed while serving in the armed forces; Romanko, US Army, September 27, 1965, and Clifford, US Navy, June 13, 1967. When they died, Romanko was only 19 and Clifford was a month past his 21st birthday.

Joe Hannon, also a Vietnam veteran, led the effort to erect a monument to honor the soldiers.

“After going to the wall (the Vietnam War memorial shrine in Washington, DC), it took me two years to go this far to line everything up, get sponsors to help pay for the monument here,” said Hanno, while weeping. . “I had a lot of help redoing this area with some very good friends of mine, Mike Haddock, Robin Dommermuth, Howard Doran and a few others.”

Hannon said it was important to match the monument to deceased Avoca police officer Ricky Janczewski, which was placed in front of the municipal building more than 35 years ago and which is across from the Romanko Memorial and Clifford.

“Everyone stepped up and went above and beyond, so I wanted to thank everyone involved in this,” Hannon added. “It shows you what a small town can do with everyone together. We can do a lot of things from a small town that I’ve really loved all my life.

Hannon said Saturday, July 30 was chosen to unveil the monument because on Sunday, July 31, the 111th Clifford family reunion would take place and many members of the Clifford family from out of the area would be in town for the meeting.

“Avoca’s biggest family is called the Cliffords and their meeting is tomorrow, so a lot of people have come from California and everywhere else to be together for the meeting, but for this thing here, the day before the meeting, they would get a chance to have more time together and then go back to where they came from and enjoy another year with the memory of this (ceremony),” Hannon said.

“I want to thank the man who started all of this, Joseph Hannon,” Romanko said. “I hope we have made two men very happy today knowing that their ultimate sacrifice has not been forgotten and that they will be immortalized in our city forever with this monument. It takes a tremendous weight off my heart to know that Danny was 9 years older than me and he was not just a brother, but a father figure and my hero.

Romanko told the crowd of more than 100 gathered that Daniel had died from friendly fire with a mortar shell fragment to the back of his head.

“As a brother, the pain never goes away, it eats at you, it will destroy you if you let it,” Romanko said. as he burst into tears. “This day will do a lot to relieve this pain, thank you. My heart goes out to the Clifford family.

Pat Clifford, who traveled from California with immediate family members, spoke on behalf of his two remaining brothers and two sisters.

“Seaman Michael Clifford was my older brother. My siblings Charles, Mary Kay, Sarah, David are here with us today as our beloved parents are here in spirit,” Clifford said. “I left Avoca for California 50 years ago and remember the day of Mike’s funeral like it was yesterday.”

Clifford stopped to try to hold back the tears, eventually calming down.

“Mike’s viewing was at our house, because that’s where my mom wanted him to be, she wanted him to be at home,” Clifford added. “The streets were lined with people paying their respects. The outpouring of love from this community, then and now, is a rare thing. Mike had a short life, but he has lifelong friends and many of them are here today and sadly some are not.

Clifford thanked all of the organizers, friends and family, veterans organizations, social clubs, breakfast clubs, all of his friends, St. Mary’s and the use of their hall, and the city of ‘Avocado.

“Special thanks to Joe Hannon, it all started with the idea that Joe should honor Mike and Danny, thank you Joe, your vision is a special gift,” Clifford said. “My brother Chuckie said the impact of Mike and Danny’s death was life changing for both families and this town and after all these years we as a community are still hurting and healing and still celebrating. lives of these men that will never be forgotten. . The whole Clifford family will always remember today. Thank you all.”

Both soldiers received numerous distinguished Medals of Honor and government citations, including the Purple Heart.

Robin Dommermuth served as emcee and the AmVets Post 189 Honor Guard held a 21-gun salute, performed tap dancing and presented the two families with the American flag during the program.

Reverend Sharon Dietz of Bethel United Methodist Church and Father Philip Sladicka of Queen of Apostle Church, both of Avoca, prayed on behalf of both families.

Father Sladicka ended the program with a rendition of “God Bless America”.

A luncheon was held at St. Mary’s Hall following the ceremony.