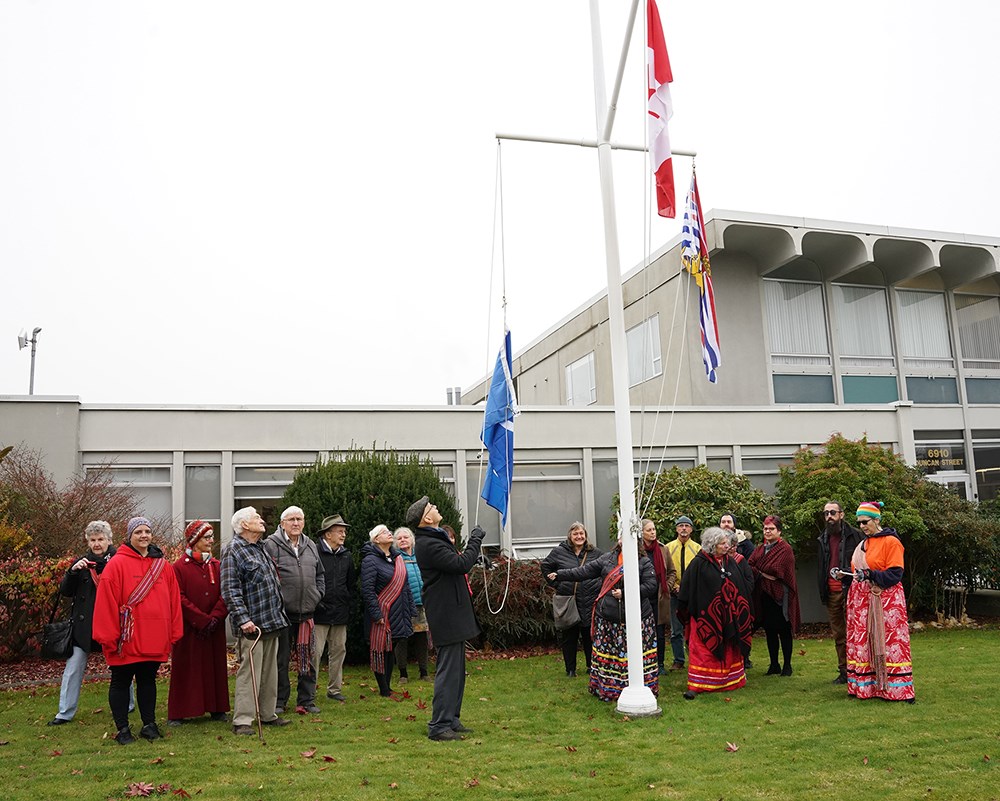 Celebration held on the grounds of the MacGregor Building, where the Métis flag was raised

Louis Riel was recognized at a ceremony and flag raising at Powell River City Hall on November 16 on the 137th anniversary of his death by hanging.

A statement was read at the raising of the flag by Nadeen Sierpina, administrator of the Métis Nation Powell River qathet, who said that on October 22, 1844, in Saint-Boniface of the Red River Colony, Julie Lagimodière gave birth to the eldest son of Louis Riel Sr.

Sierpina relates that in 1858, at the age of 14, young Louis Riel was sent to Montreal to train for the priesthood.

“Unfortunately, in 1868, at the age of 24, he had to return to St. Boniface to support his mother and recently widowed siblings,” Sierpina said. “In January 1870, under Louis’ leadership, a convention of 40 representatives from the Red River Colony created a list of rights, which was based on an inclusive vision for Manitoba. It valued bilingualism, multiculturalism, and Indigenous and minority rights.

“This list was a foundational document in the establishment of Manitoba as a province of the Canadian Confederation through the Manitoba Act, which received Royal Assent on May 12, 1870.”

Sierpina said that as a Canadian politician and political leader of Métis people, Riel advocated for guarantees for their lands, languages ​​and political rights. She said her leadership inspired the creation of Manitoba as Canada’s fifth province on July 15, 1870.

Sierpina said the North West Resistance, or North West Rebellion, was a violent five-month insurgency against the Canadian government, led primarily by Métis and First Nations (Cree and Assiniboine) allies, in what is now Saskatchewan and Alberta.

“It was created by rising fear and insecurity among Métis and First Nations peoples, as well as white settlers in the rapidly changing West,” Sierpina said. “A series of battles and other outbreaks of violence in 1885 left hundreds dead, but the resisters were eventually defeated by Federal troops. The result was the continued enforcement of Canadian law in the West, the subjugation of the Plains Indigenous peoples in Canada and the conviction and hanging of Louis Riel.

Sierpina said that 137 years ago, on November 16, 1885, Riel was hanged for treason at the North West Mounted Police barracks in Regina.

“We are gathered here today to celebrate the life of Louis Riel and give thanks for all he did for our people,” said Sierpina. “Raise a hand to our creator in praise of all who were able to attend today and send blessings to those who were unable.

“We thank everyone who helped prepare for our celebration. Remember that it is better to stand tall than to fall down.