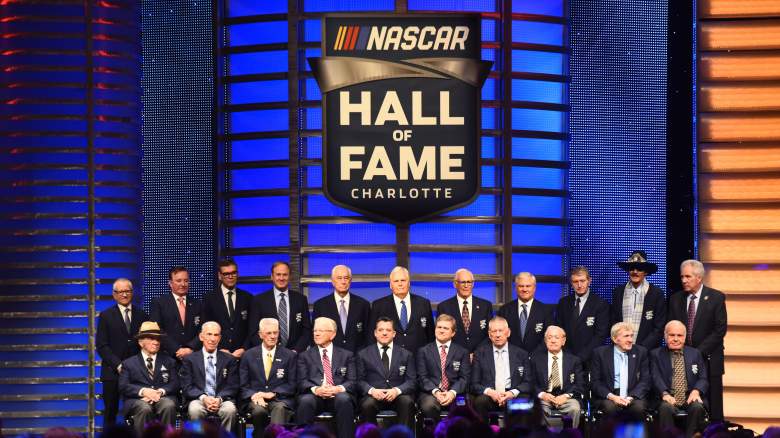 NASCAR Hall of Fame Ceremony: How to Watch and When

The NASCAR Hall of Fame will have three new members on January 21.

Three NASCAR icons will become Hall of Famers on Friday, Jan. 21 after a year-long delay due to COVID-19 uncertainty. Here’s the time for the ceremony and how those who can’t attend in person can watch.

The induction into the NASCAR Hall of Fame will take place at 8 p.m. ET on January 21. Peacock will broadcast the speeches as Dale Earnhardt Jr., Red Farmer and Mike Stefanik (posthumous induction) all enter the hallowed halls. This year’s ceremony marks the first time that there will only be three new Hall of Famers instead of five.

Red Farmer, 89, tops the list with a career that includes more than 700 wins and three consecutive championships in NASCAR’s Late Model Sportsman division (1969-1971). Farmer, who still competes in Alabama, also won the modified title in 1956.

Farmer never raced full-time in a National Series, but he still earned the honor of being one of NASCAR’s 50 Greatest Drivers in 1998 due to his many accomplishments at tracks across the country. . Now, Farmer will add another honor on January 21.

The three new Hall of Famers will have special cases dedicated to some of the greatest moments of their careers. There will be helmets, jackets, trophies and other items with special meaning.

Earnhardt spent the days leading up to his Hall of Fame induction providing additional information about his trophy case. He explained why he included Chase Elliott’s 2014 Xfinity Series Championship Trophy, his own 1999 Busch Series Championship Trophy, the NBC Sports Microphone Flag and the 2000 Winston All-Star Trophy, among other things, while adding an important context to its decisions.

One item, in particular, was the baseball-themed helmet that Earnhardt wore during the 2001 Pepsi 400 at Daytona International Speedway. He returned to the superspeedway just months after his father’s fatal crash in the 2001 Daytona 500 and took a thrilling victory after leading 116 of 160 laps.

The Hall of Fame has changed its policy for 2022

The NASCAR Hall of Fame ceremonies are fast approaching and one of the inductees is the late racing legend Mike Stefanik. His wife Julie wrote a speech for his induction. Celebrate Mike by reading his thoughts on what these times mean to this family. pic.twitter.com/bNV35cjUwT

Weeks before the Hall of Fame ceremony, politics became a topic of discussion. News surfaced that Stefanik’s widow, Julie Stefanik, would not have the opportunity to speak at the ceremony. Earnhardt posted a pair of photos from the speech as numerous industry figures called on the Hall of Fame to let her take the stage for a few minutes.

The conversation continued for several days until the Hall of Fame executive director Winston Kelley appeared on SiriusXM NASCAR Radio and announced a major change. He said during the January 10 appearance that there would be a format change to allow Julie to speak at her late husband’s ceremony.

Stefanik, who died in a plane crash on September 15, 2019, was one of the most successful drivers in NASCAR history. He won nine total titles in the NASCAR Whelen Modified Tour (seven) and NASCAR K&N Pro Series East (two) while setting the all-time Whelen Modified Tour records for wins, poles, top 10s and the top five. Stefanik also won the 1999 Truck Series Rookie of the Year award.

Stefanik never competed at the Cup Series level, but he was a dominant force on the Northeast tracks. His list of accomplishments includes eight victories at New Hampshire Motor Speedway, five at Martinsville Speedway and 20 at Stafford Motor Speedway when competing in the NASCAR Whelen Modified Tour. He added 15 more victories at Thompson Speedway.

READ NEXT: Ryan Vargas gets a full-time job for 2022