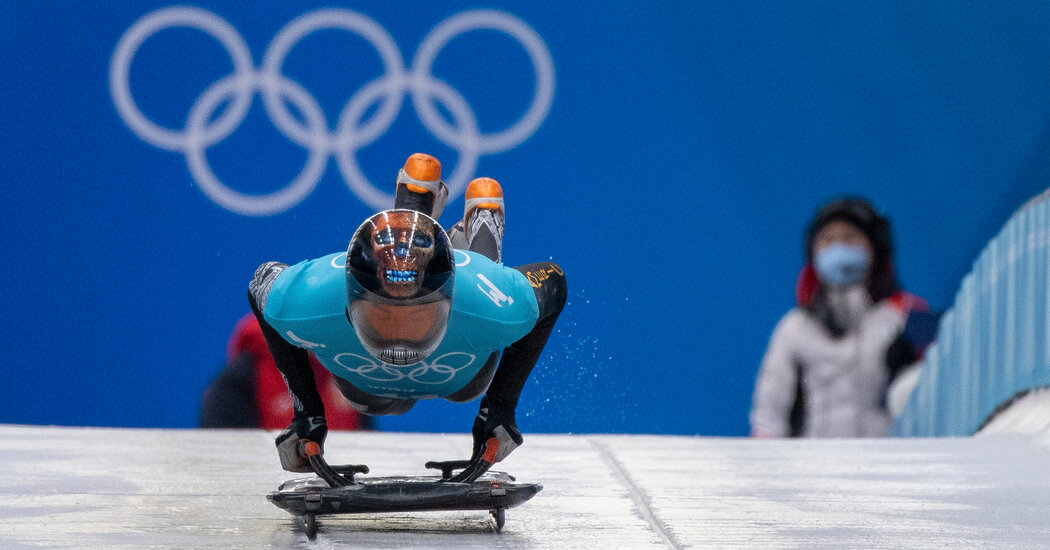 Nathan Crumpton has become an Olympic sensation, without a jersey and without competition

Last Friday night, the flag bearer of American Samoa entered the opening ceremony dressed in little more than baby oil, flip flops and an “ie toga”, or an intricately decorated traditional Samoan rug, which was wrapped around her waist. The temperature was around 23 degrees Fahrenheit.

In an interview with The New York Times, Mr Crumpton was keen to reassure everyone that he was not so cold, despite the freezing weather. He wore two coats and did a series of jumping jacks minutes before showing off his shirtless body to the world, he said.

“I’ve had to slip in freezing temperatures before and I actually thought it was going to be colder than it really was,” he said after a training session on Tuesday, dressed in plenty more clothes. “The only thing that got really cold were my hands.”

Mr Crumpton did not expect the mast he was carrying to Beijing to be metal.

“As soon as I grabbed it, within 30 seconds, my hands were going numb,” he said. “But other than that, it was okay,” he added. “I probably could have lasted another three or four minutes before I started to feel it.”

The 36-year-old was also the flag bearer for American Samoa at the Tokyo Olympics last year, where he competed in the 100 metres. He is one of only five athletes from Beijing to have also competed in the Summer Games.

But it was Mr Crumpton’s shirtless display in Beijing that won the media love, with headlines such as: ”OMG’: New shirtless Winter Olympics figure takes the world by storm ‘assault.” Google searches for “American Samoa” have increased. His photos immediately went viral, appearing on the Chinese internet with the hashtag #HotGuysOfTheWinterOlympics.

“I have a vague idea of ​​virality, but I try to stay a little protected inside the village until my run is over,” he said in an email from the village. Olympic.

Mr Crumpton is the first Winter Olympian representing American Samoa in 28 years. Her outfit last Friday featured a choker called ‘Ulanifo’, as well as a red ‘Ulafala’, which is traditionally worn by high village chiefs in Samoa. His headgear – “pale fuiono” – was adorned with rare silver nautilus shells.

He raced in two runs Thursday, finishing 20th with a time of 2:03.71, and was due to resume competition on Friday. His route to competing for the Polynesian archipelago was unlikely. Until 2019, Mr Crumpton – a Princeton graduate and resident of Park City, Utah – had never traveled to the territory.

A track athlete for most of his life, Crumpton saw skeleton on television at the Vancouver 2010 Olympic Winter Games. “I just thought it was the coolest sport I’ve ever seen in my life and I was like, ‘I have to try,'” he said. “It was so much fun I had to keep going.”

In 2011, Mr Crumpton joined Team USA, where he competed for eight years. He rose to No. 2 in the country before his career in the United States came to an abrupt end.

In 2019, a teammate filed a complicated arbitration case against the US Bobsleigh and Skeleton Federation that challenged the organization’s standard for World Cup races. The lawsuit cost Mr Crumpton his chance to compete in the World Cup and World Championship that season. Then he left the team completely.

“I was at the gate, a rather bitter and rather sad athlete,” he said. But he soon began looking for other options to fulfill his Olympic dream.

Born in Kenya to a father working for the United States Foreign Service, Mr. Crumpton has lived in Kenya, Tanzania, Switzerland, Zimbabwe, the United States and Australia. At one point he considered representing Kenya as an athlete, but the authorities did not seem eager to fast-track obtaining a passport for him, he said.

“That’s when I emailed American Samoa and asked if they were interested in a slider as I thought they might recognize the Polynesian as part of their committee. Olympic National and would be willing to basically adopt me,” said Mr. Crumpton, whose mother is Hawaiian and Chinese.

American Samoa, eager to have more representation in winter sports, welcomes him.

In 2019, Mr. Crumpton flew to the territory to resurrect the American Bobsled Federation of Samoa, which had lain dormant after fielding a two-man bobsled team in 1994. It took 300 euros (about $340) to Mr. Crumpton and some papers to reactivate the status of the federation with the International Bobsleigh and Skeleton Federation.

Mr. Crumpton has no coach. He teamed up with the British team to help film his slide. He then reviews the videos and takes his own notes.

“I am my own manager, travel agent and my own board trainer,” he said. “It’s certainly not ideal. But with my limited budget, that’s kind of what I have to do.

Skeleton racing is expensive – Mr Crumpton, who is a model and photographer, estimates he has spent around $40,000 this season. He receives a scholarship from the International Olympic Committee’s Solidarity Fund, but this only covers about half of his expenses.

To raise more money, Mr Crumpton started a GoFundMe page for people to support him in return for putting their name on his sled. He also self-published a book, “Alpha Status,” which his website describes as “500+ pages of shocking license that make ’50 Shades of Gray‘ read like a children’s story.

He wrote it after failing the 2018 Winter Olympics due to a herniated disc.

Mr Crumpton said the odds were stacked against him in a sport driven by technology and money. “I know I’m not a favorite for medals,” he said. This skeleton season will be his last, he said.

“I realize that my top 10 World Cup and World Championship days are probably behind me,” he said. “It was more about sliding and having fun.”