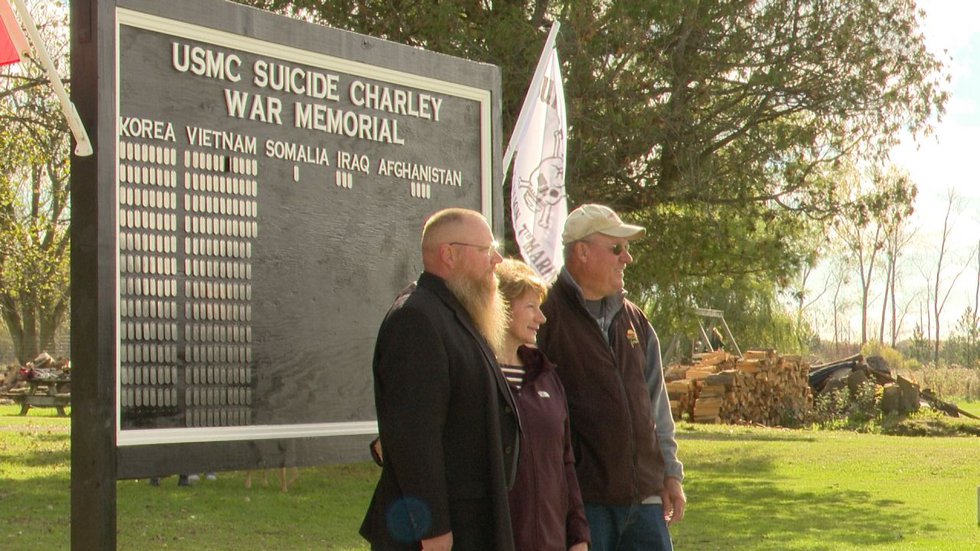 LENA, Wisconsin (WBAY) – Normally, veterans’ memorials are found in parks or cemeteries. But for Navy veteran Mike Vizer, who served from 1989 to 1993, you can find one in his front yard in Lena, WI.

With the help of a GoFundMe, he built a one-of-a-kind memorial to honor the Marines in his unit, Suicide Charley, 1st Battalion, 7th Marine Regiment.

Each name tag on the screen bears the name of every Suicide Charley Marine killed in action, from World War II to the present day.

Next to the screen, Vizer has constructed a recreation of the iconic flag-raising photo taken during the Battle of Iwo Jima which is in Washington DC.

â€œJust seeing people and reacting to the monument, reacting to the name tags, it really touched me, emotionally too. I just think it was such a blessing to have everyone here, just being apart is very special, something I will never forget, â€said Vizer.

Two years ago, the United States Marine Corps announced that for 74 years they had misidentified another of the six fighters in the photo.

It was actually Corporal Harold Keller in the photo who remains one of the most famous of all time, not Pfc. RenÃ© Gagnon.

â€œHe is more than fair, he was the second man on the flag, he was a wonderful human being,â€ said Steve Maurer, son-in-law of Cpl. Harold Keller.

“Growing up, every once in a while people would come and say ‘I heard from my parents that your father was raising the flag’ and I would say ‘I don’t know, I don’t know, he never speaks. of that, â€Kay said.

â€œI never told anyone that this had happened before, and we just found out about two years ago. But the amazing thing about this whole thing that I just can’t get over is is that someone can go to this war and see the terrible things he saw four four years ago, come home, raise a family, the guy was as normal as anyone you would see on the street â€, Steve said.

After Keller survived the war, he and his wife, Ruby, had three children and raised them in Brooklyn, Iowa, where Keller was born and lived his entire life.

Keller died in 1979 of a heart attack, but his legacy will live on forever.

â€œI like it, and I’m so honored that people want to recognize his war efforts. What Mike has done here is amazing. I hope the whole world will come to see it because it is well done, â€Kay said.

Mike and with the help of his family, built a beautiful memorial in their yard located at 6348 Logtown Rd. In Lena, WI.