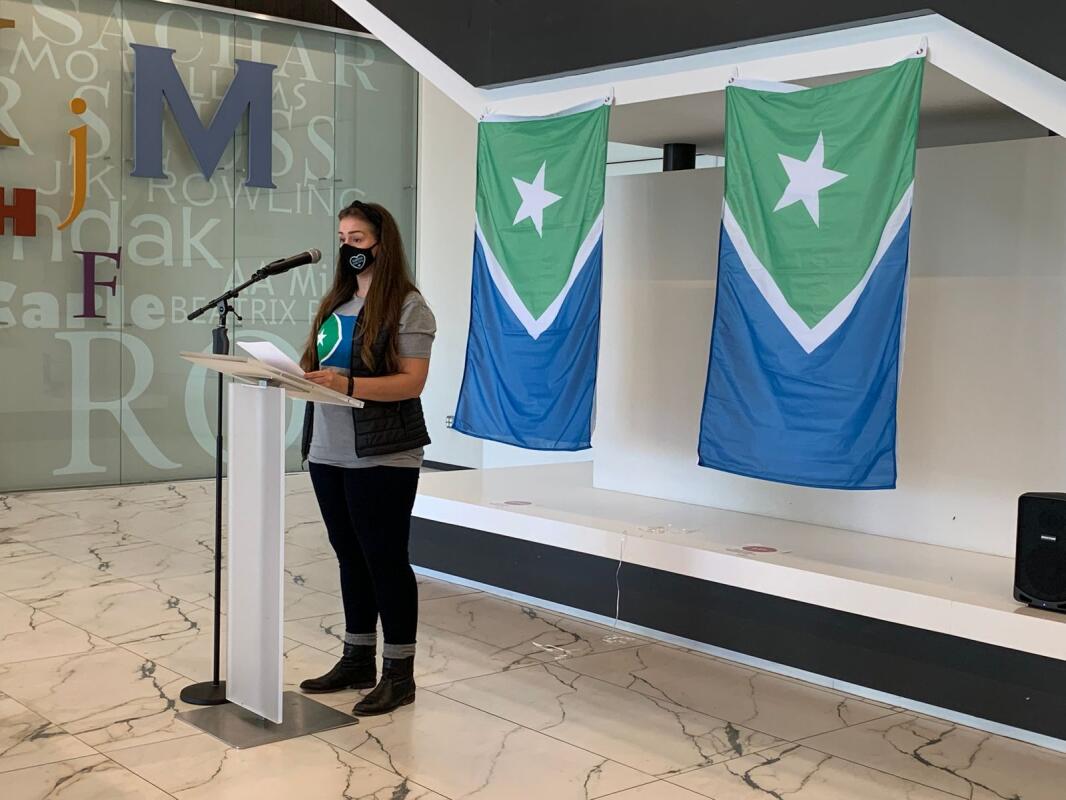 CEDAR RAPIDS – The city’s redesigned new municipal flag represents both the roots of Cedar Rapids and residents’ forward-thinking visions for the future.

The â€œHistory and Progressâ€ design option rose to the top of the four options in a city survey asking residents to rank different blue, green and white design options for choosing the new flag as a symbol of community pride. The city received 2,624 responses to the online survey, which ended in August.

The revamped flag was unveiled at 10 a.m. on Saturday in the lobby of the Cedar Rapids Public Library at 450 Fifth Ave. SE.

The City of Cedar Rapids is asking residents to rank four final flag designs to help them come up with a new flag for the city. From left to right, the flags are titled: Embracing the River, Community United, History and Progress, and Resilience and Renewal. (Image from the City of Cedar Rapids)

â€œThis flag is meant to be a symbol of pride in the community,â€ said Ashley Vanorny, member of Cedar Rapids City Council. “Our residents will now determine how it is used.”

The blue background represents the Cedar River running through town and dividing at May’s Island. On the left side, green comes to a rounded point in the center, representing the Isle of May along with the city’s green spaces and recreation areas. White symbolizes the homes, businesses and infrastructure of Cedar Rapids.

Along with the symbols, the white arc represents the progression and future of Cedar Rapids. Forming a boundary between the blue water and the green field, it also represents flood protection, which protects the community from the river while interacting with it.

The white star symbolizes the historic structures that stand on the Isle of May, and its five dots represent the city’s motto of the five seasons – spring, summer, fall, winter, and extra time for residents of Cedar Rapids to enjoy. of life and all the other seasons.

The flag redesign process began in 2019 after the North American Vexillological Association rated the flag as one of the country’s 10 worst in 2004, placing the flag on other â€œworstâ€ lists in years that followed. In 2015, the city’s flag was called out in a TED talk about the importance of flags by American radio producer Roman Mars, an avid flag enthusiast.

The existing white flag represents industry, the cityscape, corn and churches in a series of scenes circled in blue. The words “Cedar Rapids” and “Iowa” are printed in capital red letters above and below the images, and the slogan “Proud of yesterday, progressive today, promising tomorrow” sprawls across a small banner. characters below the images.

This design was chosen in 1962 during a design competition among local high schools. The artist was Fred Easker, a high school student that year.

The city of Cedar Rapids was designed by Fred Easker, a high school student in 1962. The flag has been listed as one of the 10 worst city flags in the country, according to the North American Vexillological Association Flag Survey. (Gazette archive photo)

For the new flag, Cedar Rapids asked residents to submit design ideas, colors, shapes and symbols, with the goal of creating a flag that reflects the city and incorporates the ideas of citizens. The city suspended the effort in 2020 due to the COVID-19 pandemic and derecho before asking for the latest contributions to the investigation this summer.

â€œWe think now is the time for some fun, good news and community pride,â€ Vanorny said.

Members of the North American Vexillological Association provided two sets of ratings, comments and suggestions on the submitted designs. A local committee used the association’s feedback and residents’ input to choose the four finalists.

According to the city, this project totaled $ 687.73 for public engagement materials.

Digital files of the new flag will be available for printing and other community uses. To make it accessible to the public, the five seasons tree was not used on the flag as it is a trademark of the city and is used to represent the government entity.

Raygun has made t-shirts with the flag before – Vanorny was playing sports on a Saturday morning and said “we hope to see many other local vendors making flag items”.