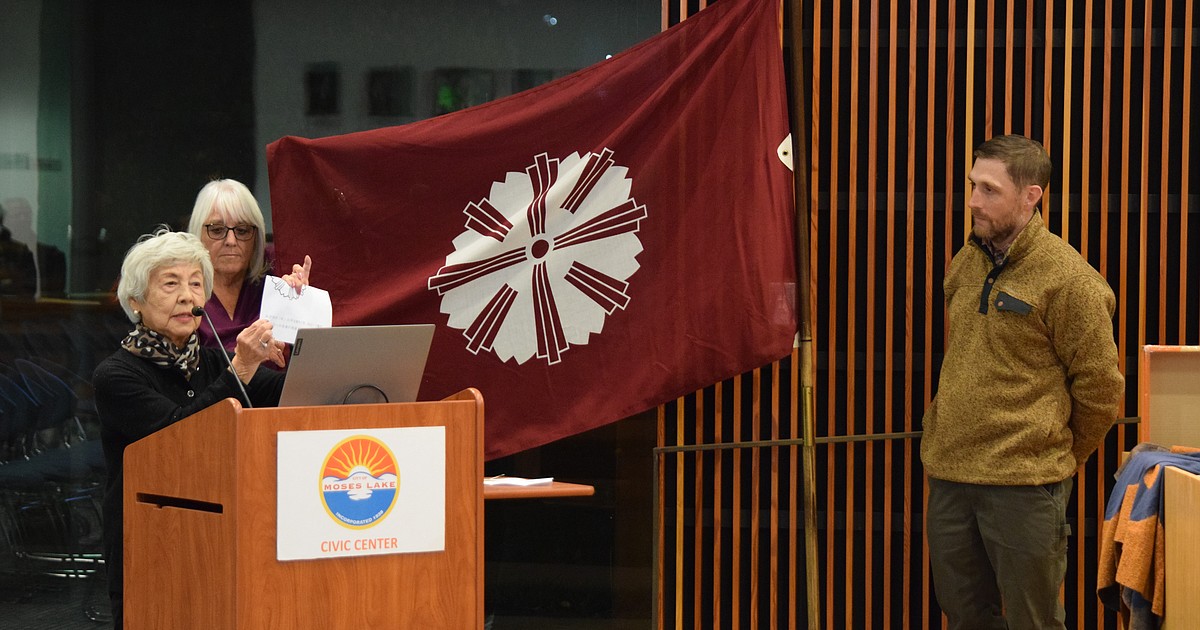 MOSES LAKE — There is a new flag on display in the town halls of Moses Lake.

At a regular Moses Lake City Council meeting on Tuesday, Ginny Hirai and Terry Moore, both members of the Sister City of Moses Lake – Yonezawa Committee, officially unfurled a Yonezawa City Flag which will now be displayed in office at Moses Lake Town Hall.

“I want to thank the City of Moses Lake for accepting this flag from our sister city Yonezawa, Japan,” Hirai told council members. “Having it displayed here in this hall will also have a special meaning, and our future visitors from Japan will enjoy seeing it here.

The flag was one of two gifts the Yonezawa City Government presented to the City of Moses Lake to officially mark the 40th anniversary of the relationship between Moses Lake and sister city Yonezawa, which was marked by a tree planting ceremony in September. The sister city relationship was launched in 1981, but the 40th anniversary celebration was postponed to this year due to restrictions imposed in both countries in response to the COVID-19 pandemic.

Hirai said the design on the flag – a cherry blossom – is actually more than the image of a flower. The first part of the city’s name, Yone, means rice, and the flag designer exploded the Chinese character -米- used in the city’s name 米沢市 in order to make the cherry trees bloom, Hirai said.

“Rice and cherry blossoms are two big things in Japan,” she said. “The artist was very clever in creating this design for his flag.”

The city of Yonezawa also gave the city of Moses Lake a special stole, or tapestry, of the night sky, with landscapes above and below to symbolize the two cities. According to City Manager Allison Williams, the artwork is designed to show the two communities as they both gaze up at the same night sky.

“This is a very thoughtful gift as we celebrate our 40th anniversary,” Williams said.

“We appreciate the relationship we have with our sister city Yonezawa,” added Mayor Don Myers.

Charles H. Featherstone can be reached at [email protected]