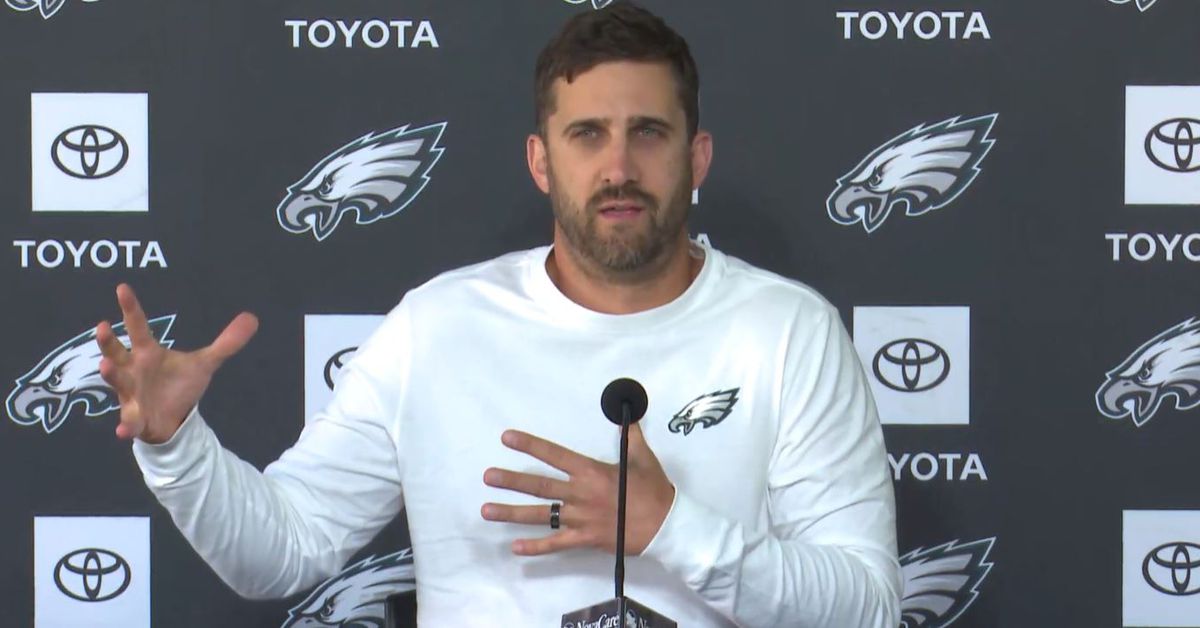 Eagles head coach Nick Sirianni spoke to reporters on Wednesday and explained a little about the game calls of Monday night’s loss to the Cowboys and admitted they need to direct the ball more. He also spoke about having more contact with Miles Sanders, why he appreciates that Jalen Hurts takes responsibility for the loss but doesn’t think it’s fair, and how he holds the players accountable.

Here’s what the head coach had to say:

The head coach explained how they script a lot of RPOs and maybe the game was called for Jalen Hurts to hand the ball back but then they see something from the defense and shoot the ball to pass. He admitted it was going to happen, but there weren’t a lot of times Hurts verified a run play.

“We count RPOs – if they want to take a guy and put him out of position for the pass, we actually count them as runs, but we have to run the ball more.”

Sirianni went on to say that he accepts living with the fact that using RPOs can skew the relationship between running and passing games. He noted that they read defense and don’t block defenders, which actually creates better angles for the entire offensive line. The head coach also explained their use of movements.

â€œWe are acting for a very different reason. We’re going to ask if we can create an advantage, if we can figure out what defense they’re in – mainly those two things – if we can put a guy in a position to do his job better. So we’re just not a team that goes from move to move, we’re going to do it for these three main reasons.

“Does he need more than five keys?” Sure. The way the game went, he didn’t understand that. And, yeah, when guys – I don’t just want to single out Miles, but when guys are down because of their role, and we expect more from their role, because they didn’t accomplish it on their own or I did. Didn’t give them a chance to accomplish it on their own, we have to pick up some guys. This is what a team does, pick it up and tell him you still believe in him. And so, when it comes to Miles, there’s no question that we have to give the ball to our playmakers. He’s a playmaker, he’s shown he’s a playmaker – whether it’s in. on-screen play, whether out of the backfield or to retrieve the ball. “

On the performance of Jalen Hurts

Sirianni was asked about Hurts’ post-game comments about blame for the loss to the Cowboys, but the head coach doesn’t think it’s fair for him to say so. He understands that Hurts takes responsibility for his role in the loss, as responsibility is something they built the program on. The head coach noted that everyone should feel this after a loss, and that if they had done something different in one or two games, the result could have been different.

As for Hurts coming out of his pocket too quickly, Sirianni explained that there is a fine line between the QB setting the pace and preventing him from using his talents, and being true to himself as a player. . They want him to work on cutting his off-schedule shots, but Sirianni thinks Hurts has made improvements – he also acknowledged, however, that there were some games he thought the QB had taken out of the pocket too. quickly.

On the production of DeVonta Smith

It was pointed out that Smith has been targeted 13 times in the last few games but has only been 5 for 13. Sirianni said they need to give him some easy touches to get him started. The head coach didn’t fail to point out that Smith isn’t lacking in self-confidence, so the easy touches are more about putting him in a groove.

On OL and injuries

Sirianni said that with Isaac Seumalo now out, they’ve thought about all possible situations and staffing combinations, but for now they are keeping this information in-house. At least for this week, it’s to their advantage not to reveal who will play where, and they still have some time to figure out what they will do when Brandon Brooks returns.

“Losing Isaac hurts because he’s a good player, he’s a good teammate, and he will be missed there.”

On how players are held accountable

Sirianni explained that they set a standard for every game, so keeping players up to that standard is as easy as pointing out mistakes that have been made. When the standard is met, they praise the guys, and when it isn’t, they correct it.

The head coach illustrated that when they watch a movie, each piece is presented and in the lower right corner, the number of each player who made a mistake is displayed on the screen. He noted that this was to film every game and every practice, so it’s about pointing out every mistake and keeping everyone up to expectations. He acknowledged that the tone used to point out these errors may differ, but that it is consistent to keep them to the standard.

“Too many pre-snap penalties on all of us.”

Sirianni spoke a bit about Derek Barnett in particular and that he wasn’t the only one in defense to shoot a false start or an offside flag, but he sees Barnett improve. He stressed that their job as a coach is not to let anything slip and that they must continue to hammer out every detail. Ultimately though, they trust the players including Barnett but if a player keeps making the same mistakes they can’t keep putting him on the pitch in the same situations.