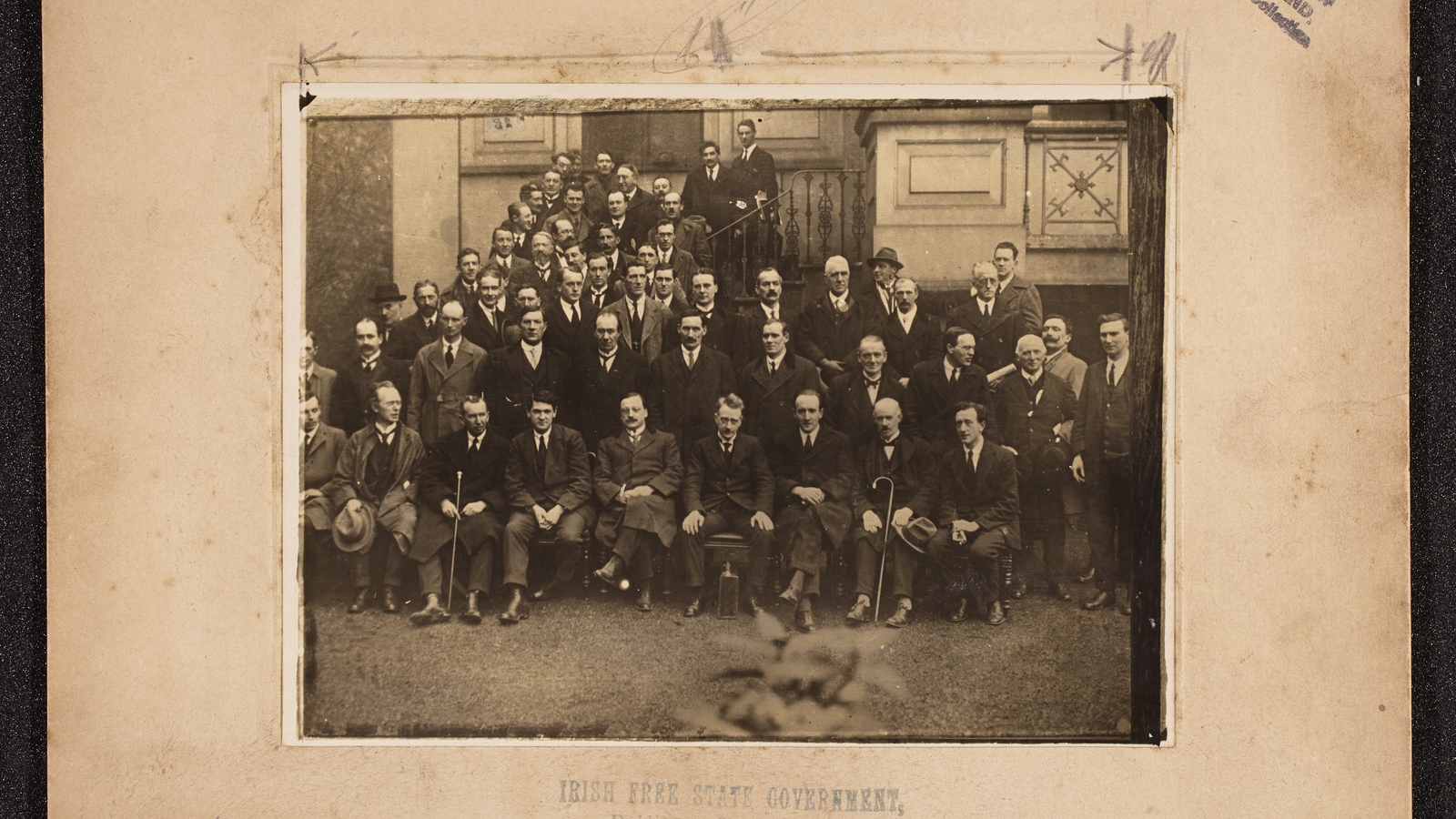 No ceremony on historic day

On the afternoon of Dublin Castle being handed over to the Irish Free State, Michael Collins – rarely one to stop voluntarily to take photos – rushed into Dublin Castle to be greeted by the Under-Secretary for Ireland, James McMahon, once described as the most senior spy. in Ireland.

“You are welcome,” said the official.

“Like hell we are,” Collins replied brushing past him.

The takeover of the Irish government – ​​in what had for centuries been the citadel of British rule in Ireland – was Collins’ sole objective. It would be a hugely symbolic moment for Ireland, emerging from years of revolution, war and social terror.

Only that morning had the first meeting of the provisional government taken place at the Mansion House. It fell to Collins, as the newly appointed president of this government, to lead the delegation.

He was accompanied by seven other government officials, including WT Cosgrave, Eoin McNeill and Kevin O’Higgins.

Next to greet Collins and his fellow Provisional Government members at the castle was Lord FitzAlan-Howard of Derwent, the Viceroy. It was his job to fulfill the terms of the Anglo-Irish treaty – which had been narrowly and divisively agreed to by Dáil Éireann days before – and to formalize the transfer of power.

Ironically, the British government had no legal basis to hand anything over to a group of men who would become the new government.

To circumvent this problem, the Provisional Government would be regarded as a committee on whose advice the Viceroy would act, until the necessary legislation was passed in London. This enabled Lord FitzAlan Howard to receive the delegation as the king’s representative and to welcome them as new ministers.

So men who – in the eyes of those who controlled the government services based in Dublin Castle – had blood on their hands and, until a few months before, a price on their heads, found themselves face to face with those they considered the architects of tyranny.

As the Irish Times noted the next day, after centuries of siege by revolutionaries: “Dublin Castle was quietly handed over yesterday to eight gentlemen in three taxis.”

It was, according to another newspaper: “Perhaps the first time an Irish Army officer has entered Dublin Castle except as a prisoner.”

Collins did not immediately reciprocate the welcome given to him and his delegation by the Viceroy when they arrived at the castle.

Indeed, the Belfast newsletter ran a headline referring to the “humiliating role of the viceroy”.

However, Colllins strategically welcomed the heads of various government departments.

These, after all, were men who knew how to run government services efficiently, of which many in the new government had little knowledge.

It was some of these officials who subsequently provided the most detailed and acerbic accounts of the proceedings.

“A motley assemblage: some with tweed caps and unpolished boots; others with yesterday’s beard still fresh on their chins; others with long, lanky hair, painterly collars and ties. M Collins himself was the first out the door, and although the red carpet had in its time been laid down in the hall and on the stairs for many strange characters, but it was surely the strangest scene of all. what he had seen.”

Henry Robinson described Collins as “cordiality itself”, moving around the room “without any of the best dogs around him. He grabbed the hands of the officials…and squeezed them warmly with his iron fist.”

Mr Robinson also noted that the rest of the Irish Government delegation “all looked pale and anxious and barely out of their teens”.

Almost until Collins arrived at Dublin Castle, not much about to happen seems to have been confirmed. There was, after all, no precedent for Britain ceding much of the UK’s territory on this scale.

One of the few real omens of the impending tragedy was the burning of files in the castle courtyard in the days leading up to the handover.

That day, there was no public ceremony and no flag was flown over the castle. The Viceroy wasn’t kept waiting in a feathered hat in the yard, as Neil Jordan’s film ‘Michael Collins’ shows.

The procedure took about 45 minutes in total. The Viceroy congratulated Collins and informed the delegation that they were “duly settled” and that the process would be completed without delay.

It was, he wrote:

“A scene worthy of a painter, worthy of the masterful hand of a great playwright. The drama of some seven hundred years – was it a comedy, a farce or a tragedy? – which was about to be played out; the curtain was going come across the last act and the last scene. When he came back up, it wouldn’t be on the same play.

The “drama”, in the words of historian Martin Maguire, was ultimately a groundbreaking event, not a spectacle.

Afterwards, Collins and the others returned to the mansion, where he is remembered as looking for Arthur Griffith to tell him, “Griffith! The castle has fallen!”

The British Government then issued what could be seen as a relatively magnanimous statement, wishing the Provisional Government “every success” and expressing the hope that “a happy, free and prosperous Ireland would be achieved”.

Whatever magnanimity was offered, the Irish side did not reciprocate, which annoyed the British by later referring in a statement to the “surrender” of the castle, which was not fully taken over until the following August.

Collins wrote to his fiancée, Kitty Kiernan, immediately afterwards that he was “as happy a man as there is in Ireland today. My thoughts are all with you now, and you have all my wishes and feelings. Dublin Castle and I am writing this note while awaiting a meeting of my Provisional Government. What do you think?

His euphoria will be short-lived, however. In June, Ireland would be embroiled in a civil war.

The author would like to thank Dr John Gibney and Dr Kate O’Malley of the Royal Irish Academy for their help and work, whose book: “The Handover – Dublin Castle and the British Withdrawal from Ireland, 1922” has recently was published by the RIA. All royalties from the sale of the book are donated to Focus Ireland.

A state event commemorating the handover of Dublin Castle will be broadcast live on RTÉ 1 television tomorrow (Sunday). Coverage begins at 1:35 p.m.