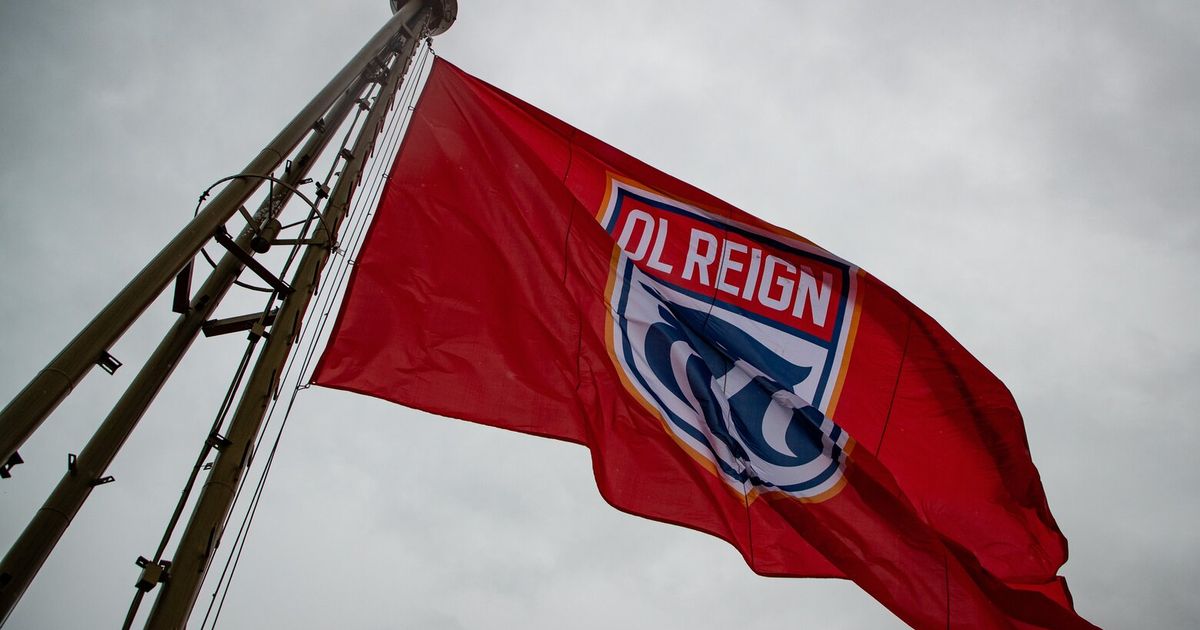 Raising a flag wasn’t exactly a dream for Jess Fishlock. But back when OL Reign trained and played at Memorial Stadium, she would often look up at the Space Needle and notice Seattle’s professional sports teams waving their banners from the iconic top of the Needle.

At a time when the Seattle area is pleading for rain, Fishlock, teammates Lu Barnes and Megan Rapinoe and coach Laura Harvey hoisted the Reign flag atop the Space Needle as precipitation finally dusted the gray skies . Friday morning’s event was a first in the club’s 10-year history.

“It’s a lot of pride and we’ve come a long way,” Barnes said after taking turns with the others to pull the rope while raising the flag. The Reign is a founding club of the NWSL which played its inaugural season in 2013 at Starfire Sports in Tukwila. The training and playing site moved to Memorial from 2014 to 2018.

When current owners, France-based OL Groupe, bought the Reign in 2019, the team played games at Cheney Stadium in Tacoma from 2019-2021 and signed a multi-year deal to now host home games at Lumen Field. .

“It’s kind of fun to see the flag and then Memorial where it all started right there,” Fishlock said of the visible terrain behind her about 605 feet down. “When you see all the other types of teams and their flags up there, you kind of go there, it would be pretty cool if we had ours up there. Looking at him now, it’s cool that he be up there. I don’t know if it was something we dreamed of, but it was definitely something we should have here.

Karen Olsen, chief operating officer and chief marketing officer of the Space Needle, said the honor is usually reserved for a team’s run to the playoffs or championship victory, although the storm has lifted its flag during the WNBA All-Star Game in Seattle in 2017 and the NHL’s Seattle Kraken flew theirs atop the needle.

Bill Predmore, who founded the Reign with his wife Teresa, couldn’t remember asking to have the team flag on top of the needle when they played for the NWSL championships in 2014 and 2015 When the Predmores became minority owners in 2019 and returned to the playoffs, they were based in Tacoma.

The Reign makes its sixth playoff appearance on Sunday when it hosts Kansas City Current at Lumen Field. The team won its third NWSL Shield — a trophy awarded to the team that finishes first overall in the regular season — and earned a first-round bye. The current upset the Houston Dash in Texas last weekend to advance.

Sunday’s winner will face the Portland Thorns FC-San Diego Wave winner for the NWSL Championship on October 29 at Audi Field in Washington, D.C.

Barnes, a defender who wears the captain’s tape, said seeing the flag flying gives her an extra boost for Sunday’s game. Rapinoe, the club’s all-time top scorer (50 goals), joked that she hoped the game would be easier than raising the flag.

“It was the scariest and the most treacherous and definitely the hardest, I struggled a bit – it was windy,” Rapinoe said of where the flag raising happened. ranked among the things she has done in the world since speaking at the White House, winning a FIFA Women’s World Cup. Coupe de France and launch of several companies. “It really is our home, so to be able to do this in Seattle and be a part of it and have the city recognize our club like this is really special.”

Other companies are also showing their support for Reign this playoff weekend. The Seattle Center Monorail system has temporarily renamed its train trains OL Red and OL Blue, a nod to the team colors. Several Seattle-area landmarks will light up in club colors at night.

But the flag will drop on Friday night for security reasons, according to Olsen.

“We’re seeing real change right now, not just here in Seattle or the United States, but around the world around women’s soccer,” said Reign CEO Vincent Berthillot. “People are now starting to understand that if you push and invest in women’s sport in general, it’s going to grow, it’s going to grow fast and you’re going to get a return from it. We’re really at the starting point right now, we we can really feel it and I have confidence in the future because everyone now realizes that the potential in sport is more in women than in men at this stage.

Harvey, the winningest coach in NWSL history, said the team will finalize play tactics Friday and Saturday. The teams split during the regular season and this is the Current’s first playoff series.

The Reign dropped out of their semi-final match against the Washington Spirit at Cheney last year.

“To be able to be here and see our flag flying shows the explosion of women’s football and the level of impact our club is having,” said Harvey. “Hopefully we can build that momentum into Sunday’s game.”

206-464-2067 Where [email protected]; on Twitter: @JaydaEvans. Jayda Evans covers the Sounders. It offers observations, criticisms and sometimes quirky stories. Evans also wrote a book about the Storm and women’s hoops titled “Game On!”