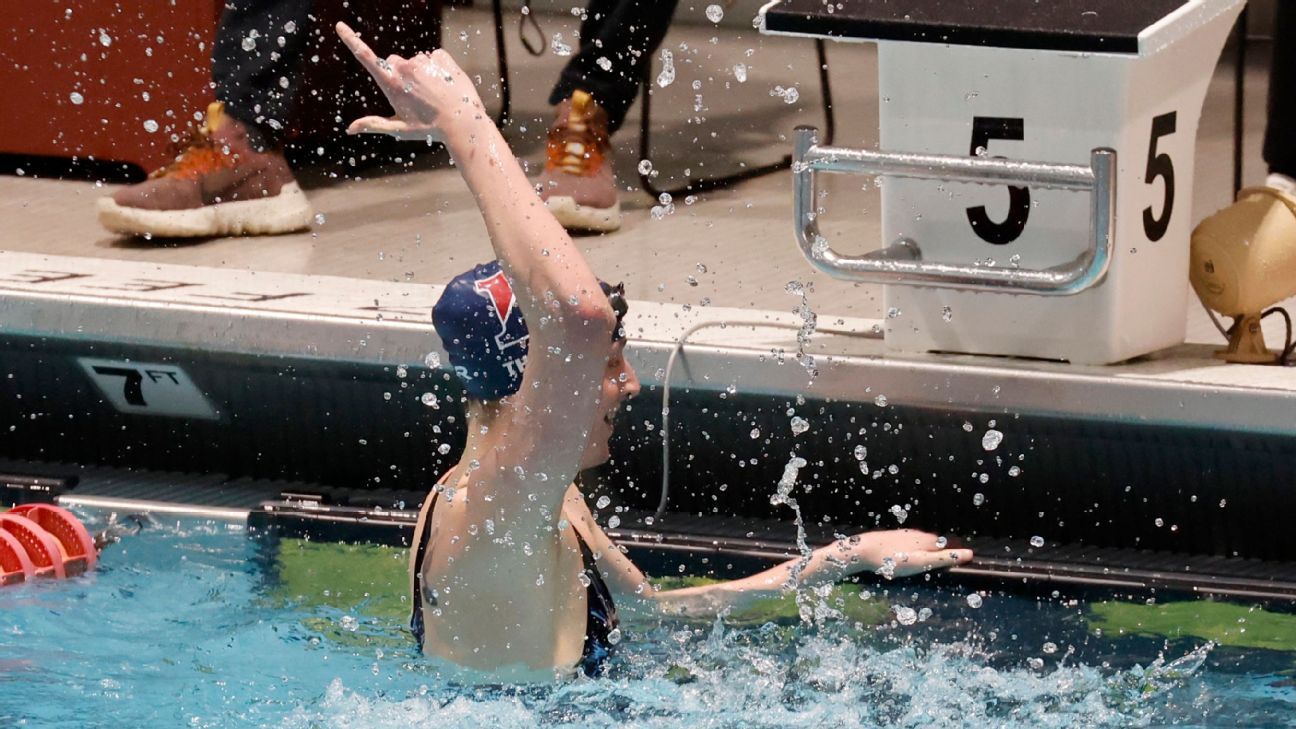 Thomas finished the competition with four titles after leading the Quakers to victory in the 400 freestyle relay later Saturday.

Thomas finished the 100 freestyle in 47.63 seconds, breaking Blodgett’s meet and pool records set by Henig hours earlier in the morning preliminaries. Henig finished in 47.82 and 2020 Ivy League champion Nikki Venema of Princeton was third in 48.81.

It was the first time this weekend that Thomas, who is a senior, was pushed all the way. Swimming side-by-side with Henig, Thomas followed the Yale junior halfway through the race and slowly gained ground before pushing just past the wall. Thomas and Henig hugged on the lane line before Thomas splashed the water with his right hand in celebration. Before leaving the pool, she congratulated Venema.

Thomas’ time is the eighth fastest in the nation this season, according to Swim Cloud. She snatched nearly 1.5 seconds off her best time this season.

Henig entered the race as the top seed after setting a Blodgett Pool and Ivy League record in the preliminaries with a time of 47.80.

With this victory, Thomas became the only three-time individual winner of the competition. She won Friday’s 200 freestyle by nearly three seconds and Thursday’s 500 freestyle by more than seven seconds. Thomas’ time in the 200 of 1:43.12 set an Ivy League record, and his 4:37.32 in the 500 set a Blodgett Pool record.

In total this week, Thomas is the new owner of two Ivy League records and three Blodgett Pool records.

Penn freestyler Catherine Buroker was a double winner this weekend, taking first place in the 1000m and 1650m. Thomas, who had the Ivy League 1650 fastest time this season and the eighth fastest in the country, did not compete in the event.

Harvard has had two double winners: Felicia Pasadyn won the 400 individual medley and 200 backstroke, and rookie Aleksandra Denisenko won the 100 and 200 breaststroke titles.

Henig, who set a pool record by winning the 50 freestyle on Thursday, was looking to claim his second title on Saturday night in his first head-to-head encounter with Thomas in an individual race at the Ivy League Championships. The last time they met was Jan. 8 in the 100 freestyle in a tri-match with Dartmouth at Penn. Henig got the better of Thomas in this heat, winning in 49.57. Thomas finished sixth that day, more than three seconds behind Henig.

Henig was also part of two championship relay teams this week. He led the Yale 200m freestyle relay which set a meet record on Thursday, and swam the anchor leg of the 400m medley relay on Friday. Yale was crowned champion after Harvard was disqualified.

Since then, Thomas has been at the heart of a debate over who can compete and win in women’s sport. Prior to competing on the women’s team, Thomas spent three seasons on the men’s team at Penn. Several of Thomas’ teammates have spoken out anonymously, both in support of Thomas and in criticism of her inclusion in the women’s team.

But the controversy of the past two-plus months has been muted throughout the four-day Ivy League Championships. Harvard alumnus Schuyler Bailar, the first transgender swimmer to compete on a men’s Division I team, draped a transgender flag on a railing near the pool deck.

Thomas, who turned down several interview requests from ESPN, was congratulated by her rivals after her wins and received a high-five from her teammates on the podium. Penn senior Andie Myers wore a face mask bearing the transgender flag throughout the meet. The conference did not make any swimmers available to the media at the meet.