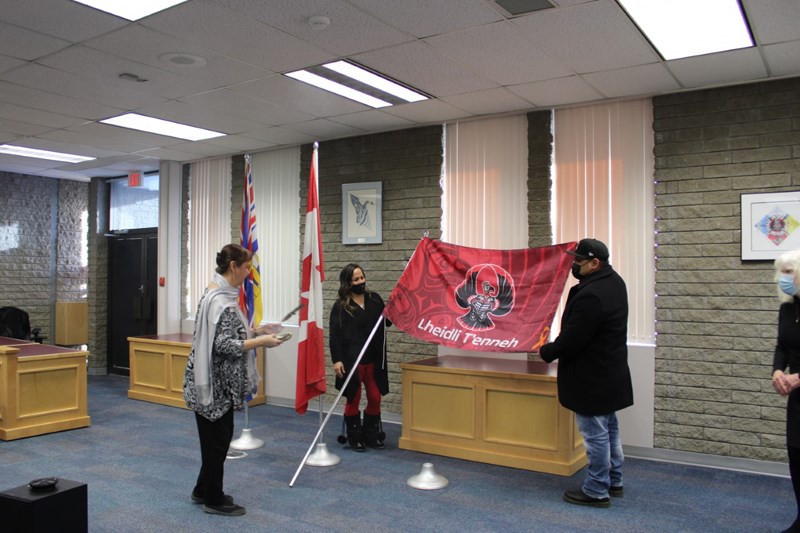 In a special ceremony, SD57 raised the Orange Ribbon Flag in memory of residential school victims

Lheidli T’enneh has now raised a new flag which features an orange ribbon in the lower right corner which serves to honor the children found in Kamloops and all those who died in residential schools.

SD57 hoisted the new flag in a ceremony this afternoon (January 24) which began with drumming by students from Nusdeh Yoh Elementary School who performed Grandma’s Song and Water Song , followed by an opening prayer by Lheidli T’enneh elder Darlene McIntosh and speeches by SD57 board members and staff.

“When the 215 unmarked graves were discovered it shocked the world. It really really shocked the world and our elders always said things like this happened but nobody wanted to believe them and so when it is came to the fore and we saw that it was now the truth that had been spoken,” McInstoh said.

“The truth is out there now and we must always be aware of it and support knowledge, education and awareness to keep it going.”

McIntosh said having it recognized at the highest level of SD57 is positive information to relay to the public.

“Today we come together to remember the dark history of residential schools and the repressive laws that generations of Indigenous people endured. Today is the truth. This is the truth about the dark and tragic past that we must remember before we can begin the path of reconciliation, we must recognize and understand that truth,” said Board Chair Sharel Warrington.

“The orange ribbon should be a constant reminder that we must not forget and we must seek understanding to work together and ensure that we have learned these lessons in the past and to build a bright future for today’s young people. and for generations to come.”

“We serve nearly 4,000 Indigenous students in this community and we have an opportunity to make the lives of these 4,000 students very different from historic. I am honored and moved to hold this position and to be able to do this work alongside the community of our nation.

“It’s very difficult for aboriginal people to talk about aboriginal issues within the school district because we’ve had a horrible history with the education system moving forward, although we look forward to the partnership we’re going to have with SD57.

The Board of Education will return for its first public meeting tomorrow evening (January 25) since the by-election earlier this month.