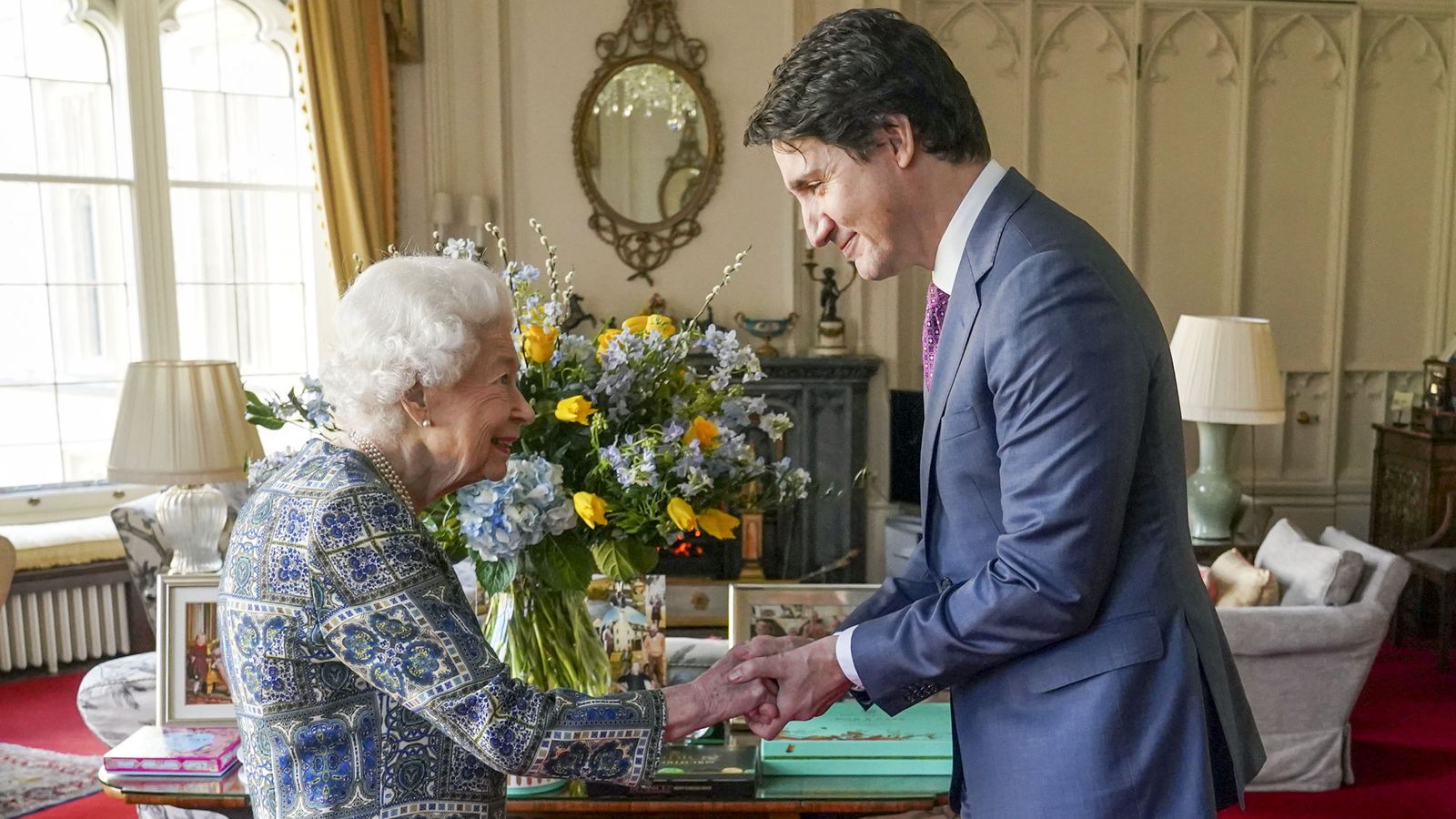 The monarch held an audience with Mr Trudeau at Windsor Castle today as he is in the UK for talks on the war in Ukraine with Prime Minister Boris Johnson and his Dutch counterpart Mark Rutte.

The 95-year-old, who usually takes a neutral stance on political issues, greeted Mr Trudeau in front of a vase of blue and yellow flowers and also wore a blue patterned dress, in what appeared to be a subtle message of support to Ukraine. .

Follow the latest updates from the war in Ukraine here

Blue and yellow are the colors of the Ukrainian national flag.

The Queen tested positive for coronavirus on February 20, just days after Prince Charles and the Duchess of Cornwall both contracted the virus.

The monarch, who is also Queen of Canada, was pictured standing and smiling warmly at Mr Trudeau as he held her right hand in his.

Mr Trudeau was also seen laughing as the Queen gestured to herself during the meeting in the Oak Room drawing room.

The Head of State has not been photographed with the cane she has been using for a short time.

The Queen has a strong connection to Canada, as the Commonwealth nation has been her most frequent overseas destination.

She has visited more than 20 times, including a trip as a princess, but a few years ago she ended her official visits abroad.

Mr. Trudeau met the Queen several times as a youth in the 1970s, his father, Pierre Trudeau, being one of Canada’s longest-serving prime ministers.

Believed to be triple vaccinated, the queen reportedly experienced mild symptoms of a cold.

Shortly before, Prince Charles also tested positive for COVID for the second time, and his wife, the Duchess of Cornwallwas diagnosed with the virus.

Sky’s royal correspondent Rhiannon Mills said at the time that “a number of cases have been diagnosed within the Windsor Castle team”.

Last Tuesday, Charles said his mother was “much better now”, and the head of state was pictured holding his first virtual hearings since his diagnosis.

The Queen has two high-profile events coming up this month, including the Commonwealth Service at Westminster Abbey on March 14 and then the Duke of Edinburgh’s Memorial Service, also at the Abbey, on March 29.

Last fall, she pulled out of the Cop26 climate change summit, the Festival of Remembrance and then the Remembrance Sunday Cenotaph service due to a sprained back.

She also missed the General Synod of the Church of England.

The Queen now regularly uses a cane and has recently been photographed looking more fragile.

She remarked during an audience at Windsor Castle last month: “Well, as you can see, I can’t move.”