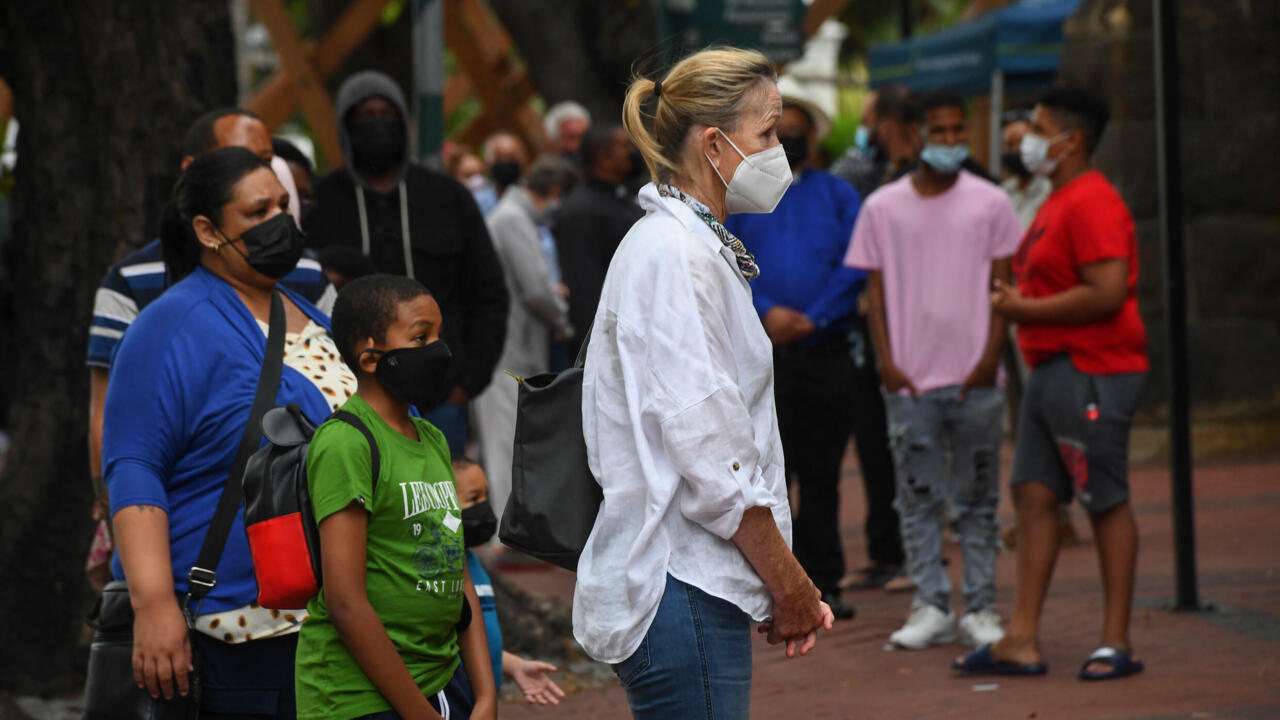 Six Anglican clerics transported the coffin to St. George’s Cathedral, where the Nobel Peace Prize laureate once spoke out against white rule and was previously archbishop.

A small bunch of carnations rested on the simple casket, in accordance with the wishes of modesty expressed by the beloved defender of rights.

In contrast, the typical funeral in South Africa is an elaborate and expensive business.

The indefatigable spiritual and political leader passed away peacefully on Sunday at the age of 90. He is to be cremated and his ashes will be buried on Saturday.

Tutu’s body will be on display Thursday and Friday to allow as many people as possible to say their last farewells.

Ordinary South Africans of all races and ages flocked to Southern Africa’s oldest cathedral as soon as the doors opened to the public.

Among them was Liz Cowan, a 65-year-old white social worker who grew up in apartheid South Africa who was told the charismatic black cleric was a dangerous man.

â€œHe was so vilified. It wasn’t until my teenage years that I realized he was a good guy, â€she recalls, standing in a queue reflecting a country Tutu dubbed theâ€œ Rainbow Nation. sky “.

A young girl wearing a purple top stopped briefly in front of the coffin, making the sign of the cross in Christian tradition.

Among those in mourning was a woman wearing a purple Muslim veil – the color many wear to evoke Tutu ceremonial dresses.

â€œHe never saw you as a person of color or any other faith. You were all, as he always said, the ‘people of the rainbow’, said Lucille Helleger, head of the Anglican Women’s Fraternity Group in Cape Town.

Earlier Thursday, the church held a private service for the family, including Tutu’s widow, Leah.

The coffin was opened for the family to see the body and they sang the late Archbishop’s favorite hymn, according to Tutu’s successor, Thabo Makgoba.

After a private cremation, Tutu’s ashes will be buried inside the cathedral, whose bells ring in his memory for 10 minutes at noon every day since Monday.

Tutu retired as Archbishop after 10 years in 1996 and then led a harrowing journey into South Africa’s dark past as chairman of the Truth and Reconciliation Commission, which exposed the horrors of the apartheid down to the last detail.

South Africa marks a week of mourning for Tutu, with the country’s multicolored flag at half mast across the country and ceremonies taking place daily until the funeral.

A memorial event hosted by his foundation on Thursday heard from some of Tutu’s closest friends and associates, including Nelson Mandela’s widow, Graca Machel.

â€œI have also had the privilege of being very close to many of those who are gone now,â€ Machel said. Now, “I feel like a part of me has been cut, cut, cut one by one,” she said.

Tutu and Mandela forged a long-standing bond by fighting to end apartheid.

“We cannot stand idly by and wonder when the failed July 2021 insurgency will raise the next horrific chapter of chaos, chaos and destruction,” Mandela said. â€œWe must collectively put out the fires (…) of poverty, inequality and unemployment. “

He was referring to the riots sparked by the imprisonment of ex-President Jacob Zuma for contempt, the worst violence to have gripped South Africa since the end of apartheid.

Saturday’s funeral service will be simple in accordance with Tutu’s wishes.

“He didn’t want ostentation or lavish spending,” his foundation said, adding that Tutu had even “requested that the coffin be the cheapest available.”

Weakened by advanced age and prostate cancer, Tutu had retired from public life in recent years.

He is survived by his wife LÃ©a and their four children.