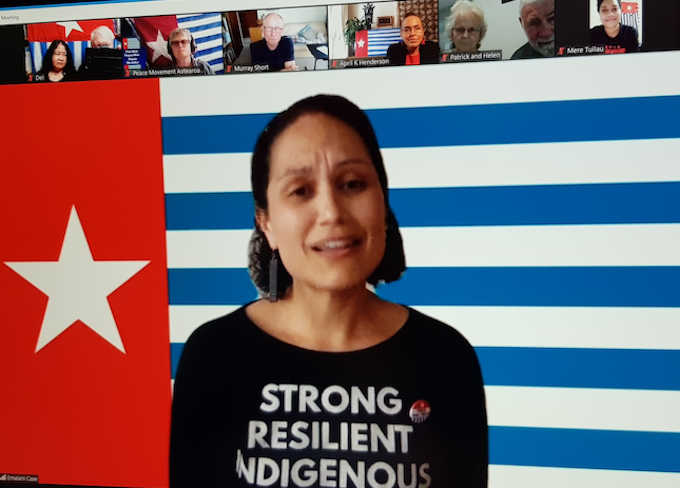 By Paul V. MaganaDecember 1, 2021No Comments

From Auckland TÄmaki Makaurau to Aotearoa in New Zealand to Paris, France, and from Wellington Te Whanganui-a-Tara to Jayapura and far beyond, thousands of people around the world have today raised the The morning star flag – banned by Indonesian authorities – in simple acts of defiance and solidarity with West Papuans.

They honored the raising of the flag for the first time 60 years ago, on December 1, 1961, as a powerful symbol of West Papua’s long struggle for independence.

One of the first flag raising events took place today in Wellington, where the Aotearoa peace movement launched a virtual online ceremony with most of the participants sporting the banned flag.

Greeted by Emalani Case, professor of Pacific studies at Victoria University, a Hawaiian, many young Pacific Islanders spoke about the indigenous struggle in West Papua and their hopes for independence.

Two Green MPs – Teanau Tuiono and Eugenie Sage – were also among the “flag bearers“, declaring their solidarity with the Papuans’ struggle for self-determination.

Asia-Pacific Report editor-in-chief Dr David Robie and Del Abcede were among those who spoke.

In six decades of brutal civil conflict, hundreds of thousands of lives have been lost to fighting and deprivation, and Indonesia has come under international criticism for human rights violations, reports Stefan Armbruster of SBS News.

In Australia, the The morning star flew to activist Ronny Kareni’s adopted hometown of Canberra.

“It makes me cry for joy because many Papuan lives, those who came before me, shed blood or spent time in prison, or died simply for raising the The morning star flag, â€Kareni, Australian representative of the United Liberation Movement of West Papua (ULMWP), told SBS.

“Commemorating the 60th anniversary for me demonstrates the hope and also the continued spirit in the struggle for our right to self-determination and for West Papua to be liberated from the brutal occupation of Indonesia.”

Indonesian diplomats regularly issue statements criticizing the flag protests, including two years ago when the flag was hoisted at Leichhardt Town Hall in Sydney, as “a symbol of separatism” which could be “misinterpreted as representing the Australian government support â€.

No response to questions about the flag’s 60th anniversary was received by SBS News from the Indonesian Embassy this year, and community members and groups declined to comment.

“It is the symbol of an aspiring independent state that would secede from the Unitarian Republic of Indonesia, so the flag itself is not particularly welcome in official Indonesian political discourse,” said Vedi Hadiz, Indonesian citizen and director from the Asian Institute of the university. from Melbourne.

â€œRaising the flag is an expression of the grievances they have against Indonesia for the way economic and political governance and development have unfolded over the past 60 years.

“But it’s really part of the job of Indonesian officials to counterpoint that West Papua is a legitimate part of the Unitarian republic.”

The history of The morning star
After World War II, a wave of decolonization swept the globe.

The Netherlands reluctantly abandoned the Dutch East Indies in 1949, which became Indonesia, but retained Dutch New Guinea, much to the chagrin of President Sukarno, who led the struggle for independence.

In 1957, Sukarno began to seize remaining Dutch assets and deported 40,000 Dutch citizens, many of whom were evacuated to Australia, largely because of the Netherlands’ reluctance to hand over Dutch New Guinea.

The Dutch created the Council of New Guinea made up of Papuan majority elected representatives in 1961 and declared a 10-year roadmap to independence, adopted on The morning star flag, national anthem – “Hai Tanahku Papua” Where “Oh my country Papua” – and a coat of arms for a future state which will be known as “West Papua”.

The flag of West Papua was inspired by the red, white and blue of the Dutch, but the design can have different meanings for traditional landowners.

Red is now often cited as a tribute to the bloodshed while fighting for independence.

Britain, France, New Zealand and Australia – represented by President of the Senate Sir Alister McMullin in ceremonial dress – attended the 1961 inauguration, but the United States, after initially agreeing an invitation, withdrew.

The morning star high for the first time
The The morning star The flag was first hoisted alongside the Dutch flag during a military parade through the capital Hollandia, now called Jayapura, on December 1.

On December 19, President Sukarno began ordering military incursions into what he called “West Irian”, which has seen thousands of soldiers parachute or land by sea ahead of battles they have overwhelmed. lost.

With long supply lines halfway around the world and waning international support, the Dutch felt their time was up and ceded the territory to UN control in October 1962 as part of the “New York Agreement”, which abolished the symbols of a future West. Papuan state including flag.

The UN handed over control to Indonesia in May 1963 on condition that it prepare the territory for a self-determination referendum.

The so-called Free Choice Act referendum in 1969 saw the Indonesian military muster 1,025 Papuan leaders who then voted unanimously to be part of Indonesia.

The result was accepted by the United Nations General Assembly, which did not declare whether the referendum complied with the “self-determination” requirements of the New York Agreement, and Dutch New Guinea was incorporated into it. indonesia.

In 1971, the Free Papua Movement (OPM) declared the “Republic of West Papua” with the The morning star like its flag, which has become a powerful binding symbol for the movement.

“This is a milestone, 60 years old, and we are still waiting to freely sing the national anthem and freely fly the The morning star flag, so it’s very important to us, â€Kareni said.

â€œWe still continue to fight, to claim our rights and our sovereignty over the land and the people. “