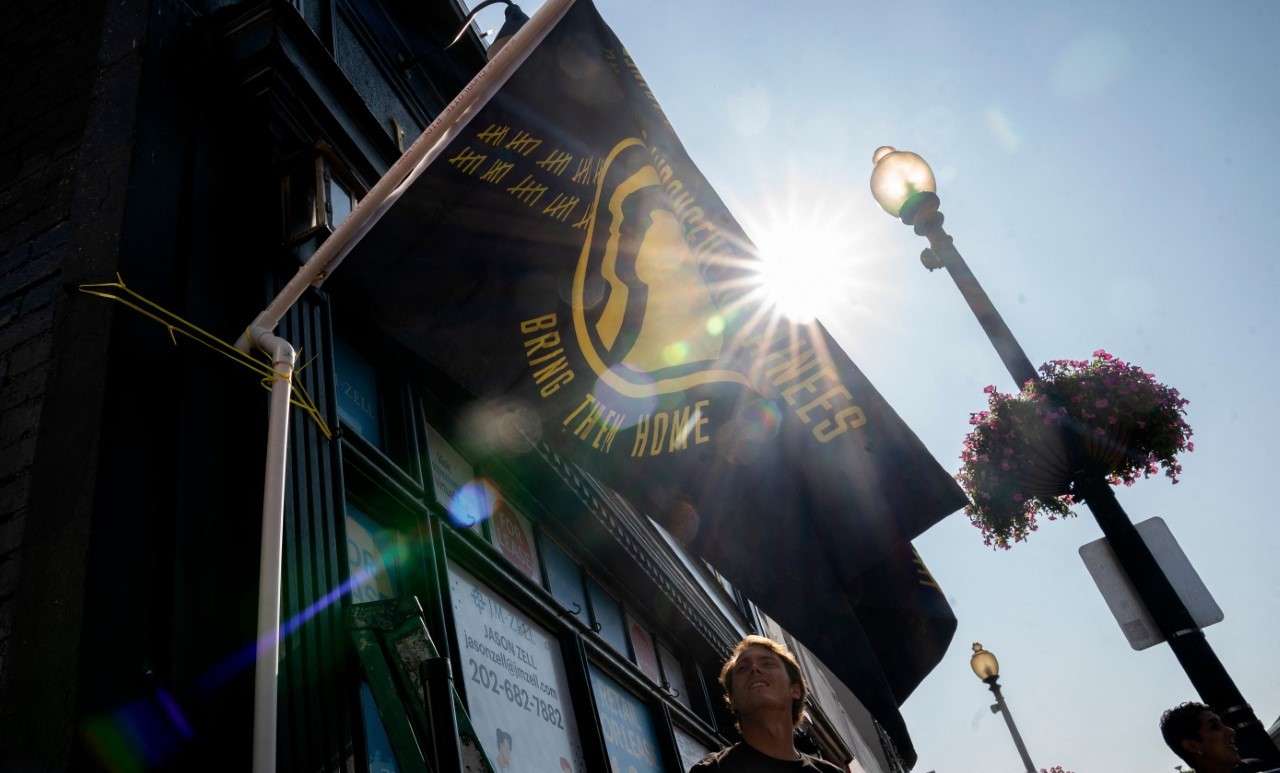 Reviews | A flag for the American hostages

A simple, yet powerful way to further galvanize the public and our leaders into action? An official flag.

With an act of Congress, a new banner could fly under the stars and stripes on government buildings — from post offices across the country to embassies around the world. The flag would serve as a national promise to the families of hostages and wrongfully detained Americans that the United States is doing everything in its power to recover them. It would also raise awareness of the national emergency this issue has quickly become, which would hopefully lead to more pressure on the government to act on – and keep – this promise.

After a long design process, the families of current and former hostages and the organizations that support them helped create such a flag.

There are five main elements to the flag. First, the title of the flag, “Hostages and Wrongful Detainees,” which is consistent with recognized language of the Levinson Act. Second, the symbol of the numbered days, which emphasizes the central attribute of their struggle: each day that passes is another day when the families of hostages are deprived of their integrity. Third, three human profiles, which represent the hostage’s individual struggle and show the diversity of our nation. Fourth, the “Bring Them Home” motto, which is a call to action. Fifth, the yellow and black colors of the flag, which recall the tradition of using yellow ribbons to remember our captives and the darkness of their cells, dungeons and caves.

There is strong precedent for the effort of the hostage families. In 1970, a group of families of prisoners of war (POW) and missing persons (MIA) fought to raise awareness of the suffering of their loved ones by creating the National League of POW/MIA Families flag, in as a “symbol of our nation’s concern and commitment to resolving as fully as possible the plight of Americans still imprisoned, missing, and unaccounted for.” …”

The POW/MIA flag flies above the White House, Congress, and all manner of federal buildings. Seeing this flag reminds every American of the ongoing struggle of these families to bring their loved ones home and our gratitude for their sacrifice. The flag was also a powerful element in the push to bring back all American POWs at the end of the Vietnam War.

In an otherwise toxic political landscape, lawmakers on both sides of the aisle have an opportunity to come together and honor the efforts of hostage families by codifying this new flag and placing it with the POW/MIA flag under Old Glory in our federal buildings.

Today, according to the James W. Foley Legacy Foundation, there are at least 67 Americans wrongfully detained overseas. They are held captive because they believe that American citizens can be traded for imprisoned comrades, ransomed to fund nefarious activities, or used to induce US officials to change government policy. But whatever the reason, it means 67 families have had their lives put on hold. They are in anguish and pain as they contemplate the condition of their loved ones every day.

Washington has recently become a little more serious in its handling of this crisis. President Barack Obama established the Office of the President’s Special Envoy for Hostage Affairs in 2015. President Donald Trump signed into law the Levinson Act in 2020. Just weeks ago, President Joe Biden released an executive order to prevent the taking of more Americans. Bringing our hostages and wrongful detainees home is a nonpartisan national priority. But we can do more.

It would be appropriate in the same law to decree a national awareness day on the taking of hostages and unjustified detention.

Being held hostage for being American can happen to any of us, and sadly, it happens all too often around the world. Like our beloved prisoners of war and MIAs, hostages and wrongful detainees deserve an official flag to remind the American people that they are deprived of their liberty only because they carry a blue passport bearing the seal of our nation. Let us show our commitment to our fellow citizens in such difficult circumstances and make it clear that bringing our American captives home is a national priority.