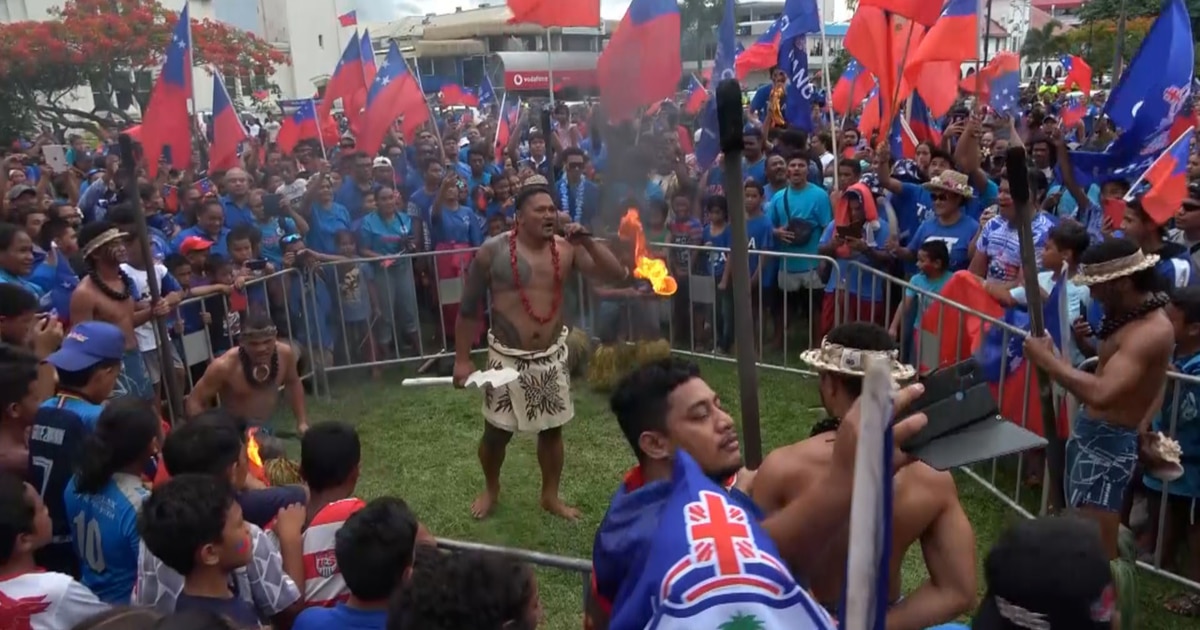 The Samoan side are well aware of the huge interest they have generated by reaching their first Rugby League World Cup final.

Toa Samoa fans have been blasting car horns and waving every Samoan flag they can find since the team’s shock 27-26 semi-final victory over tournament hosts England, the last weekend in London.

That put the Toa in the final on Saturday at Old Trafford with heavy favorites Australia, who have won eight of the last nine World Cups.

“We’ve seen all the videos that have come out of it and how proud they all are. The flags are sold everywhere, it’s pretty crazy.”

Even actor Dwayne Johnson took to social media, asking the Toa to show courage and define their legacy.

“I send this message with boundless love, boundless reverence and respect and boundless pride for my boys, my usos, the Toa Samoa Rugby Team,” said The Rock. “This is the first time our island, our country, our culture of Samoa has made it to the final for any sport. They are making history and I couldn’t be more proud of them, we couldn’t not be more proud of them.”

Matt Parish has coached Samoa since 2013 and said Crichton and other Australia-based players could have signed up with Kangaroos instead of Samoa. But their ambition to make history, to put Samoa back on the map, was bigger.

“That was the whole idea when all the boys promised to come to Samoa,” Parish said. “We didn’t want to be there to compete with other teams, we really wanted to reach the top.”

Crichton was part of the Penrith Panthers side that won the National Rugby League final last month, along with Samoa teammates Jarome Luai, Brian To’o, Izack Tago, Spencer Leniu and Taylan May. They were further strengthened in the Samoa squad by Joseph Suaalii and captain Junior Paulo.

They lost 60-6 to England in their opener and turned the tide in stunning style. They are the first new team to reach the final in 54 years.

But they face Australia as massive underdogs, although Crichton said they are far from done.

“They are the best team that everyone wants to beat,” he said. “They’re full of superstars and they’re going to test us, but we definitely trust the boys that we can do the job.” .”

Australia coach Mal Meninga said he would not take Samoa lightly and insisted his side would play with as much passion as Samoa.

“I will not tell [Samoa are] huge underdogs,” Meninga said. “They played really good rugby league. As Matt has mentioned many times, it’s not how you start, it’s how you end.

“They deserve to be here. We don’t underestimate them. We fully respect them. We have to prepare well and do our best to win.”

Meninga said the opportunity to win a 12th World Cup crown has not dulled the Kangaroos’ commitment.

“We are no less passionate or engaged,” he said. “We are expected to win all the time, that’s the burden we carry, but we always play with the passion and commitment to be Australian.

“I’m an internationalist, I want the international game to thrive. It’s been a great World Cup and playing Samoa in the final is a great testament to how the game is developing – it’s going to be a fantastic game.”

Meninga kept the same side that beat New Zealand 16-14 in an epic semi-final, including half-back Nathan Cleary ahead of experienced rival Daly Cherry-Evans.

Parish was forced to make a change. Hooker Fa’amanu Brown, who replaced an absent Danny Levi in ​​the semi-finals, was ruled out by concussion protocols. Utility player Chanel Harris-Tavita steps into the half-model role in her final international match.