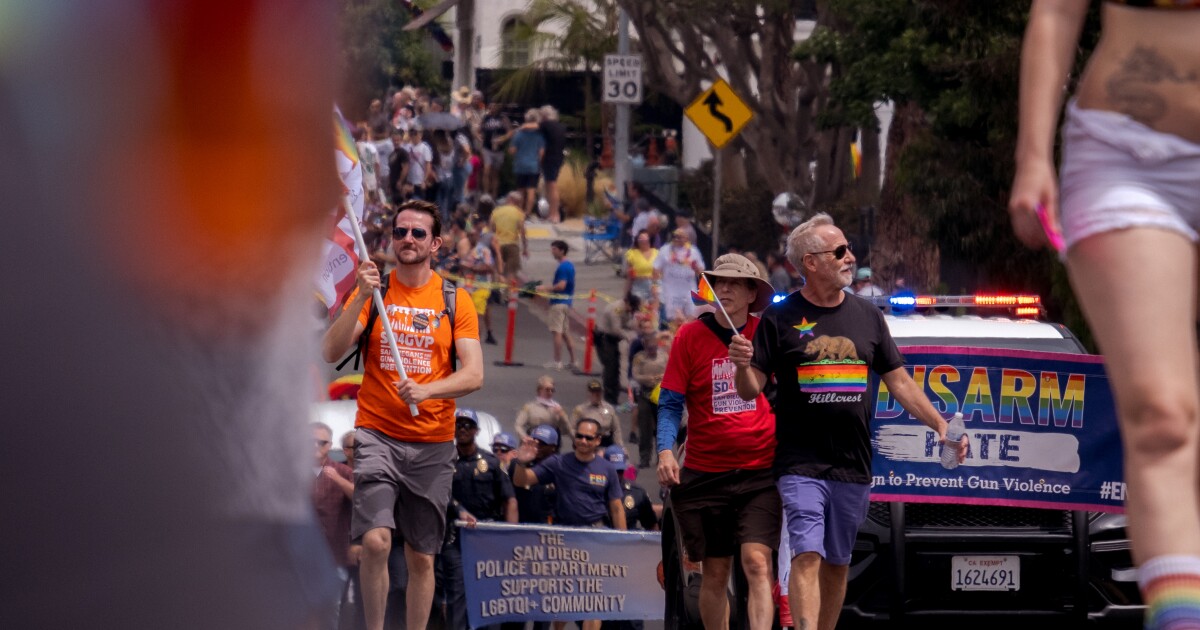 As San Diego Pride Week continues, thousands of residents took part in the return of the annual in-person Pride Parade and Festival to Balboa Park on Saturday.

San Diego Mayor Todd Gloria participated in the parade, which began at 10 a.m. at the Hillcrest Pride Flag, 1500 University Ave. Gloria is the first openly LGBTQ person to be elected mayor of San Diego.

“Pride brings us together in times of protest, mourning, victory and celebration,” said Fernando Lopez, executive director of San Diego Pride. “Pride helps us connect to the community and our newfound family. Pride gives us access to vital direct services and provides grants to our local and global LGBTQ community.

“I am inspired by the idea of ​​our community coming together again,” he continued. “Together, we will continue to pursue justice with joy.”

The weekend’s events kicked off at 8 a.m. with the San Diego Pride 5K walk/run on Saturday, which started at the corner of Center and University Avenue in Hillcrest. Last year, despite the pandemic, more than 1,300 runners and walkers from around the world participated and raised $24,000 for SD Pride’s charity partners.

The San Diego Pride Parade and Festival is the fourth-largest such event in the nation, event organizers said, and saw more than 350,000 attendees in 2019. Past festivals have featured heads of posters such as Kesha, TLC, Melissa Etheridge and En Vogue.

Since its founding, San Diego Pride has donated over three million dollars to the local and international LGBTQ+ community through revenue generated from annual events.

“LGBTQ diversity, equity and inclusion are at the heart of our efforts to invite people to our vibrant city because when people feel welcome, they want to visit,” said Julie Coker, President and CEO of management of the San Diego Tourism Authority. “That’s why we’re so excited for San Diego Pride to return in 2022. It will showcase our friendly, inclusive spirit while drawing visitors to our hotels, restaurants and cultural attractions and boosting our local tourism economy.”

The parade ends at Laurel Street, where the Pride Festival entrance is located. The two-day festival begins at 11 a.m. in Balboa Park, with live music on four stages, including Ashnikko, Baby Tate, Daya and Snow Tha Product.

“Our goal at this year’s Pride Festival is to primarily showcase our extremely talented local LGBTQ community,” Lopez said. “We are thrilled to come together again for our first in-person Pride Festival in three years, where our artists and facilitators help us be seen, heard, find family, raise funds, build capacity and to carve out space for all of us to unabashedly be our true, authentic selves.”

“We are still fighting for justice and it takes away our joy,” said Mila Jam, one of Saturday’s performers and a black and transgender lawyer. “We need each other now more than ever to stay strong and see the liberation through.”

The San Diego Public Library will also join in the fun by releasing a limited-edition library card featuring a design created by Crawford High School student Leslie Pagel. It features an illustration of Marsha Johnson outside the Stonewall Inn in New York. Johnson was a gay and trans rights activist and one of the prominent figures in the 1969 Stonewall Uprising.

“I wanted to pay tribute to her and the work she has done for the community,” Pagel said. “She was alive at a time when trans people were greatly misunderstood, but they were the ones who carried much of the community’s fight for liberation.”

The library will have a booth at the Pride Festival. More information can be found at www.sandiego.gov/public-library/lgbt.