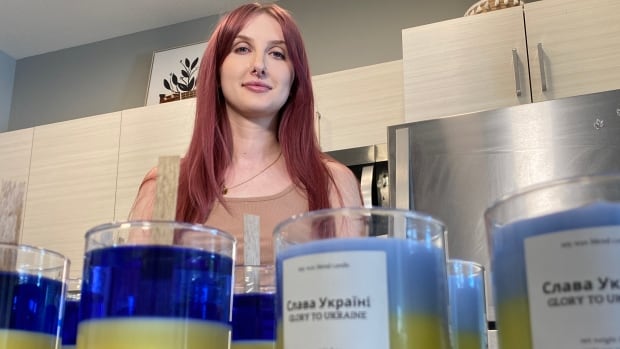 A Saskatoon business owner from Ukraine is selling scented candles, colored to match the Ukrainian national flag, with the intention of donating thousands of dollars in profits to humanitarian efforts in the war-torn country.

Jana Bendasyuk said she had been pouring and selling the blue and yellow candles for about two weeks, raising nearly $3,000 for various organizations providing support for Ukraine.

She and her family immigrated to Saskatchewan from Lviv, Ukraine in 2001, but much of her family still remains in that country, which has been suffering from Russian invasion for a second month now.

“It’s hard to sit back and do nothing. It’s very hard to watch what’s going on and not have support to offer Ukrainians and our families,” she said.

“I felt like I had to do something. It felt like a perfect way to support the Ukrainian people and also give the people of Saskatoon a little piece of Ukraine to take home.”

Bendasyuk said his family lives in the west of the country and has been safe so far. Her mother calls her family in Ukraine daily, but she is worried because the war has spread deep into the country.

“It definitely hits pretty close to home…to have so many family members in Ukraine,” she said.

“Just looking at the city that I love and was born in, it’s been very, very difficult to see the light at the end of the tunnel and to hope and pray for things to get better,” a- she declared.

There is no specific scent that is standard for the candles – these are chosen by the buyer – but the yellow and blue colored wax represents the Ukrainian national flag.

The candles are called Slava Ukraini, which means “glory to Ukraine”, and all proceeds from the sale of the candles are sent to various organizations, Bendasyuk said, including Doctors Without Borders and Save the Children. She also said that she planned to donate money to the Ukrainian army.

She plans to disburse funds in lump sums to organizations in late May and late summer.

She said that in choosing charities, she was careful to ensure that the money would be used to directly support Ukraine and not fund the organisations’ administrative costs.

So far, Save the Children said it has received more than $10,000 in donations for Ukraine from Saskatchewan businesses, foundations, fundraisers and individuals.

“We are providing basic necessities including food, shelter, clean water, warm clothes and hygiene kits in Ukraine and neighboring countries where children and families arrive after fleeing the conflict,” the charity said.

He also said he is focusing on child protection, family tracing and reunification of children who are not accompanied by their families at the border and who are at risk of exploitation, abuse and trafficking during of their flight.

The Canadian Red Cross, while not among the organizations chosen by Bendasyuk, said it had raised more than $140 million as of April 6 through cross-Canada donations for humanitarian efforts in Ukraine, which includes matching funds from the federal government.