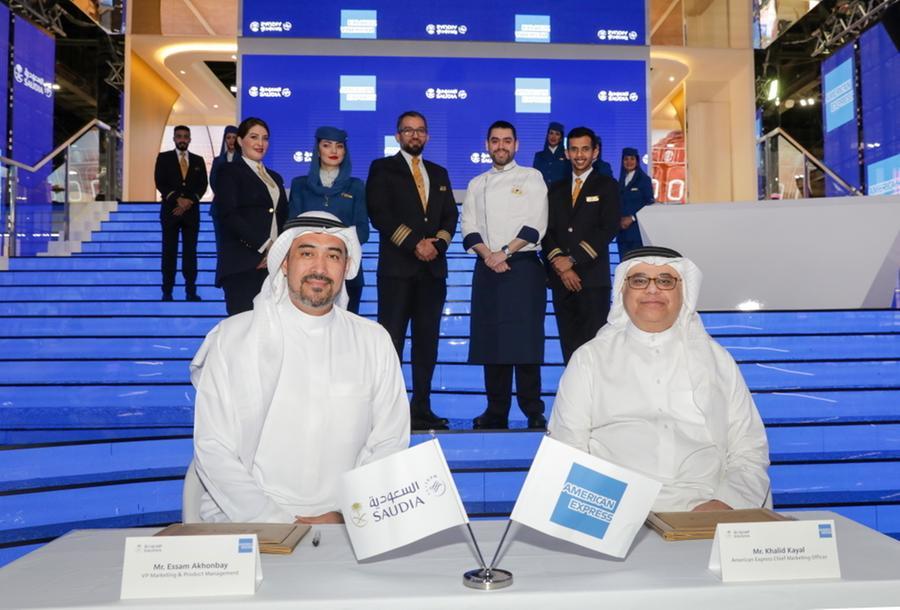 The announcement builds on the successful ongoing partnership between the two parties through the existing AlFursan American Express co-branded credit card which allows American Express Saudi Arabia cardholders to earn miles directly by using the menu.

SAUDIA Vice President of Marketing and Product Management, Mr. Essam Akhonbay, and Chief Marketing Officer of American Express Saudi Arabia, Mr. Khalid Mohammad Kayal, were on hand to mark the occasion at a ceremony signing at the Arabian Travel Market in Dubai.

Commenting on the expanded partnership, Mr. Akhonbay said, “SAUDIA is proud to build on the successful and longstanding partnership with American Express Saudi Arabia,”

“Jointly, we are committed to providing members with added convenience to maximize benefits earned and build travel journeys with flexibility in mind.”

Mr. Kayal added, “Consolidating our strategic partnership with SAUDIA for the benefit of our cardholders is an important priority. The relationship with SAUDIA began with the success of the AlFursan American Express cobrand credit card and with the signing of our new agreement, all American Express Saudi Arabia cardholders will be able to access the benefits of our strategic partnership and redeem their points. Memberships Rewards® for AlFursan miles.

SAUDIA provides a full range of online services through www.saudia.com and its mobile application that allows customers to book and manage their flights in a convenient and simple way.

Saudi Arabian Airlines (SAUDIA) is the national airline of the Kingdom of Saudi Arabia. Founded in 1945, the company is one of the largest airlines in the Middle East.

In recent years, the airline has invested heavily in its fleet of narrow and wide body aircraft and operates one of the youngest fleets in the sky, with an average aircraft age of 5 years.

The airline operates a route network that includes more than 100 destinations on four continents, including all domestic airports in the Kingdom of Saudi Arabia.

SAUDIA is a member of the International Air Transport Association (IATA), the Arab Air Carriers Organization (AACO) as well as a member airline of the SkyTeam alliance since 2012.

The Saudi national airline was named the fastest growing airline in the Middle East in 2022 by Brand Finance® and the world’s most improved airline in 2021 by Skytrax. SAUDIA also received the prestigious award in 2017.

The carrier is rated a five-star leading global airline by the Airline Passenger Experience Association (APEX) and awarded Diamond status by APEX Health Safety powered by SimpliFlying, in recognition of the airline’s extensive safety measures in response to the pandemic.