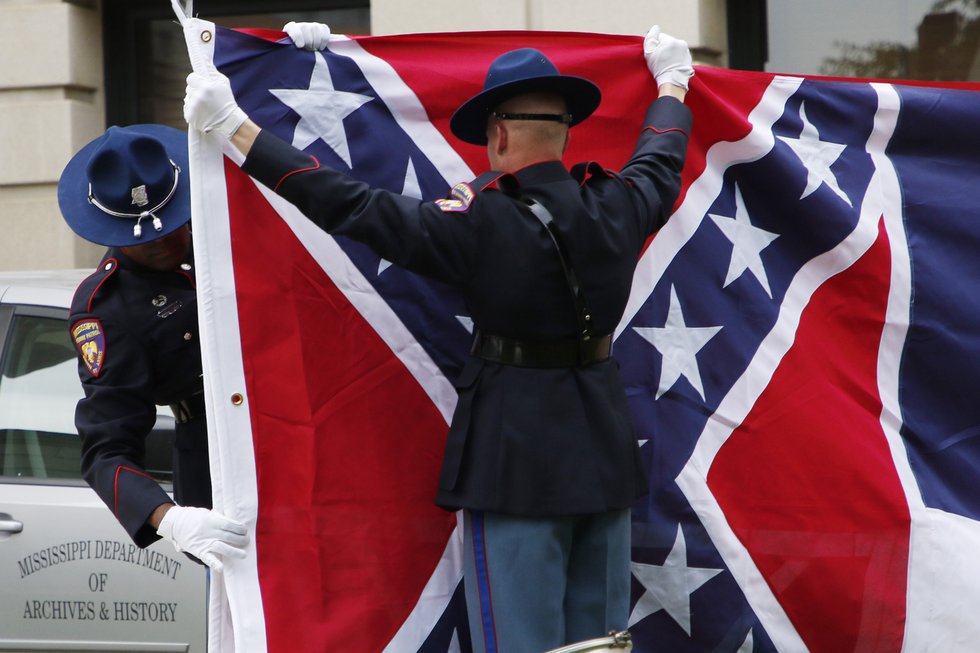 JACKSON, Miss. (WLBT) – A year ago today, the 1894 flag was last flown above the State Capitol.

“Put it in a museum” is a phrase that has been shouted at rallies and protests for years. A year later, after the retirement ceremony, the largest of the three Capitol flags is on display at the Museum of Mississippi History. And we got a glimpse of the collections room where the flags flying above each room are now kept for conservation.

“They’re stored in those big, flat-drawer cabinets,” says Nan Prince, director of collections, Museums Division. “So we keep them as flat as possible. They are so big that we have to fold them, but we stuff the folds with acid-free tissue paper. We also maintain proper humidity and temperature controls in this room as well as lighting controls. “

House Speaker Philip Gunn first publicly expressed his desire to see the flag changed five years earlier. So I asked him how it was for him to see him fall.

“There was a feeling of relief, I guess, to know where we had come to the point where it had been accomplished,” Gunn described. “It was a heartwarming opportunity to stand there and watch him come down, knowing that we had done something that will put Mississippi in a more positive light. Very gratifying to be able to participate.

Senator Hillman Frazier lobbied for years for a flag change.

“Delighted with joy … overwhelmed by the emotions of this day,” noted Frazier. “And also see the pride of my colleagues that we have finally done something together to move the state forward.”

Both men mentioned the new state chapter inaugurated that day. So who should thank?

“Nobody changed the flag,” Gunn said. “It was a joint team effort not only of the people on Capitol Hill, but also of people outside the Capitol. Lots of business interests, community leaders, religious leaders, all of whom came together to advocate for this change. “

“The youth movement was really successful because they made it clear to us that we were dealing with their future,” added Frazier. “And they wanted something they could be proud of. So, it was very impactful. “

Something to note about the collections room of both museums, the very first In God We Trust flag to fly over the Capitol is stored in a drawer adjacent to these ancient flags.