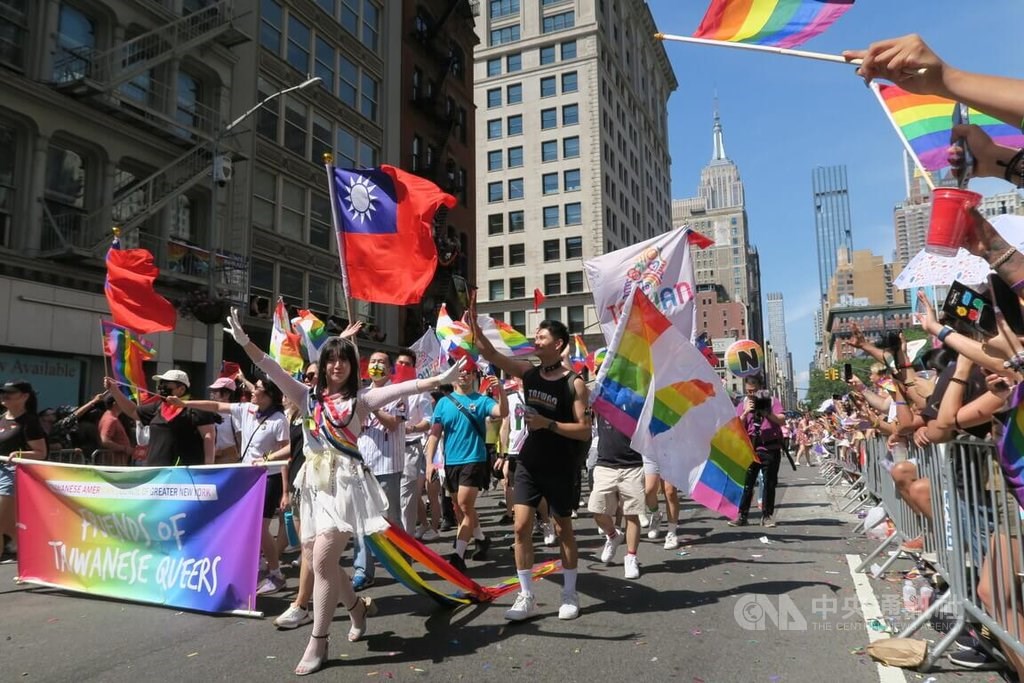 The NYC Pride March, held entirely in person for the first time in three years, drew thousands of revelers celebrating the LGBTQ community with colorful costumes and floats.

They marched through Lower Manhattan, along Fifth Avenue, through Greenwich Village and to the Stonewall National Monument, the site of the June 1969 riots that launched the modern LGBTQ rights movement.

While the approximately 60 participants representing Taiwan did not have a float, they carried the national flag, along with the rainbow flag and balloons that spelled out their country’s name.

Behind them, music by Taiwanese pop stars A-mei (張惠妹), Jolin Tsai (蔡依林), and Aron Yan (炎亞綸) blares from the speakers of a truck, paying homage to LBGTQ rights in Taiwan, which has become in 2019 the first Asian country to legalize same-sex marriage.

It was the fifth time in a row that Taiwan took part in the parade.

“Since New York is full of vigor and vibrancy, we wanted people to go out and feel the city’s vibe and charm,” said Hsu Bor-cheng (許伯丞), the coordinator of the Taiwanese contingent at the March of the New York Prides 2022.

Hsu also said the march was an opportunity to shine the spotlight on Taiwan’s exclusion from many international organizations and to highlight its need for greater support to effect change in this regard.

One of the other Taiwanese participants, graphic designer Wang You-he (王又禾), who launched her career in New York five years ago, said she felt a sense of belonging at the parade.

“Everyone is so warm and friendly, and it just makes you feel like you’re not fighting alone and you belong in a gay community with lots of others like you,” she said.

Wang, who took part in the parade for the first time, also said she felt like an advocate for Taiwan’s status in Asia, as it relates to LBGTQ rights.

“I feel like a torchbearer for the ‘Asia Premiere’ – so nervous and excited,” she told CNA.

(By Flor Wang and Ozzy Yin)