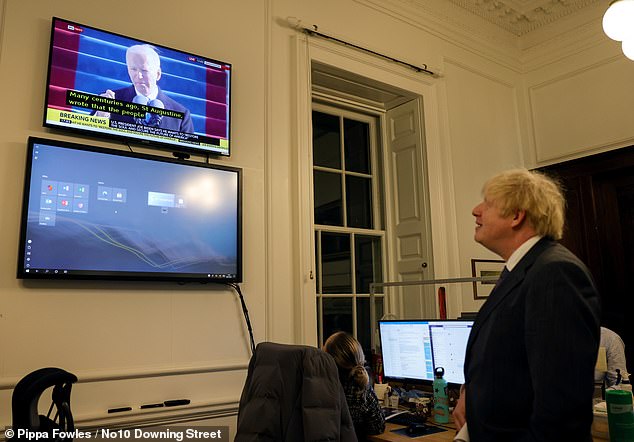 Zoom show for Boris and Joe? The first meeting between the Prime Minister and the new US President could be a video call due to Covid restrictions

By Larisa Brown and Jason Groves for the Daily Mail

The prime minister has never met the president and may not see him in person until the summer due to the global pandemic.

The UK was represented at yesterday’s inauguration by Dame Karen Pierce, US Ambassador to Britain.

She said the UK was waiting to hear whether the new administration wanted a face-to-face meeting or a virtual meeting ahead of the G7 summit in June, when world leaders meet in Cornwall.

The ambassador told Radio 4’s Today programme: ‘We know they want to increase protections [from Covid-19] so we [will] wait to hear from them in the coming days to find out if it will include face-to-face meetings. If so, we are now very used to having Zoom meetings, virtual meetings, so I’m sure those will be between the Prime Minister and President Biden. But we are waiting to hear.

Choosing her words carefully, she said the diplomatic community was “very happy to see American democracy prevail” and looked forward to a “time of cooperation”.

The lack of an early invitation to Washington will be seen by some as a snub, particularly if other Western leaders travel to the United States to congratulate Mr. Biden in the coming weeks.

It will also spark fears about the strength of the so-called special relationship under Mr Biden, who has previously described the Prime Minister as a “clone” of Donald Trump.

After the inauguration of a new US president, world leaders usually rush to be the first to secure an invitation to the White House.

In 2017, the race was won by Theresa May, who immediately returned the favor by granting President Trump the honor of a full state visit.

Despite Mr Biden’s long career in frontline politics and Mr Johnson’s stint as Foreign Secretary under Mrs May, the two men never met and had not even spoken until until the Democratic leader defeats Mr. Trump in November.

Ministers had feared a diplomatic snub from Mr Biden’s team. In 2019, Mr Biden, a staunch opponent of Brexit, described Mr Johnson as a “physical and emotional clone” of Donald Trump. But he moved quickly to build bridges last year. Mr Johnson was the first European leader called up by Mr Biden after his victory over Mr Trump in November.

Ministers hope that the UK’s hosting of the G7 summit and Cop26 climate conference this year will provide the two leaders with the opportunity to bond over their shared commitment to tackling climate change.

Foreign Office diplomats rejoiced at the departure of Donald Trump, which sent shock waves through the department countless times. A diplomat said: “Many will not shed a tear.”

The sentiment was shared on both sides of the Atlantic, with a US source saying: ‘The sigh of relief is not necessarily about politics but rather the character of the man leaving the White House.’

Defending his close relationship with Mr Trump, Mr Johnson said: “I think it’s very important that the British Prime Minister has the best possible relationship with the President of the United States.” It’s part of the job description.

He later dodged a question yesterday about whether he considered Mr Biden ‘woke’ – an American term originally used to describe people concerned about social and racial injustice.

He said there was ‘nothing wrong with being awake’ – but said he would always stand up to those who wanted to pull down statues of historical figures like Churchill.

It came after Labour’s foreign affairs spokeswoman Lisa Nandy said Mr Biden’s election was a lesson for his party that it was possible for a ‘woke’ politician to win a major election .

She said the president was a “woke guy” who had “advocated for Black Lives Matter protesters.”

Speaking during Prime Minister’s Questions, Mr Johnson underlined the common ground between the Biden administration and his own.

He said the UK was the first country to set a goal of net zero carbon emissions by 2050, adding: “We hope President Biden will join us.” We will work with President Biden to secure the transatlantic alliance and NATO. The issue of Northern Ireland and Brexit has been a source of tension between the government and Mr Biden, whose ancestors were Irish Catholics. Northern Ireland Secretary Brandon Lewis plans to fly to the United States to meet the Biden team for a post-inauguration visit, sources have said.