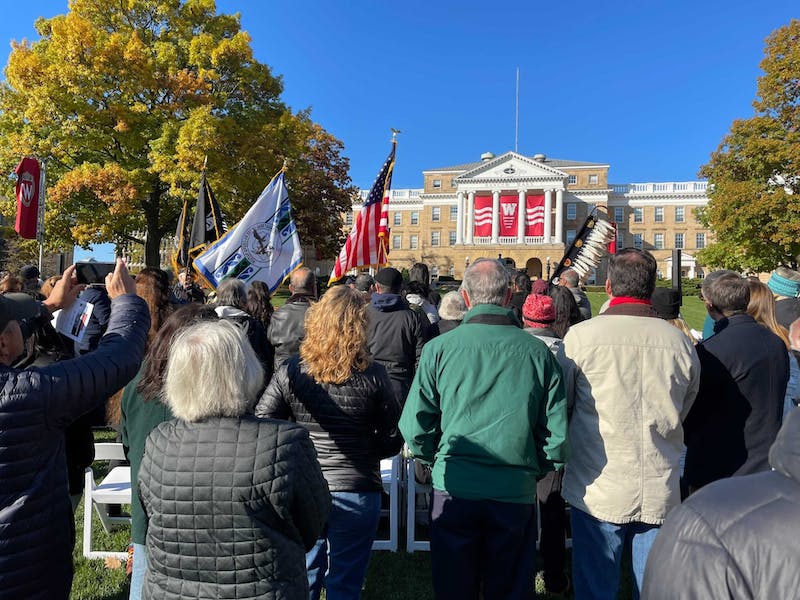 By Paul V. MaganaNovember 6, 2021No Comments

Bascom Hill was packed as the campus community watched the historic Ho-Chunk Flag raise above the University of Wisconsin-Madison on Friday morning.

The event was set up as a way to continue the process of what the university calls “Our Shared Future”, a initiative set up to recognize the shared past between the university and the sovereign peoples of the Ho-Chunk Nation and other First Nations of Wisconsin, together building a better future

The flag raising marked the first time that a flag of another nation has flown over Bascom – in the university’s history, representing progress from “ignorance to awareness” on campus, a phrase which was repeated in today’s program.

The ceremony began with an address by traditional chief Clayton Winneshiek, a Ho-Chunk dignitary. He spoke about the importance of remembering who lives on the earth and why.

â€œI was a little saddened that it wasn’t an everyday affair, where you see this flag of the Ho-Chunk Nation flying here in Ho-Chunk Land,â€ Winneshiek began. “But recognizing the Ho-Chunk people is a start.”

Traditional chief Winneshiek was also tasked with making the invocation to begin the ceremony, but in the Ho-Chunk tradition of “not letting the elders pass,” he invited his father, Gordon Thunder, to do so instead. .

Chancellor Rebecca Blank also took the floor to deliver remarks on behalf of the university, stressing that this flag raising is just the beginning of the conversation, not the end.

“I am proud of the progress we have made, moving from ignorance to awareness, but I am fully aware that there is still work to be done,” Blank said.

With Blank intended for leave university Next summer, she concluded her speech with the assurance that she will inform her predecessor of the commitment to continue working with First Nations peoples and of its importance.

The Color Guard of the Sanford WhiteEagle Legion hosted the flag raising as the Wisconsin Dells Singers sang the song Ho-Chunk Flag.

As the Color Guards entered, the flagpole on Bascom Hall slowly began to reveal the American flag, the Wisconsin flag, and then the flag of the Ho-Chunk nation.

Enjoy what you read? Get Daily Cardinal content delivered to your inbox

The three flags fluttered together in the wind, lit by the sun. Those at the ceremony were invited to reflect on the events Teejop – the term Ho-Chunk for the country the university is in – saw and how history has organized the ceremony.

Although the general mood was one of excitement among the participants, the excitement was underscored by a deep sadness, in recognition of the atrocities inflicted on First Nations people throughout history.

â€œThis school was founded and Wisconsin became a state in 1848, well at the start of the displacement of the Ho-Chunk people west of the Mississippi,â€ said Vice President Karena Thundercloud, who commented on behalf of Ho-Chunk. Nation, says. “In 1863, when the school admitted its first female students, the Ho-Chunk people applied for citizenship but were refused.”

Thundercloud echoed the sentiments expressed earlier in the ceremony, being careful to point out that the flag-raising ceremony is a step in the right direction, although there is still a lot of work to be done.

â€œThis opportunity you are witnessing today is not just a recognition of all that is history, but a testimony that our community is intertwined. This ceremony will enrich the conversation […] which takes us from ignorance to consciousness.

The ceremony ended with a song by Dejope by the Wisconsin Dells Singers, honoring the history of the country where the event took place. The Color Guard invited â€œwarriorsâ€ to join them in handing over the flag at the end of the ceremony.