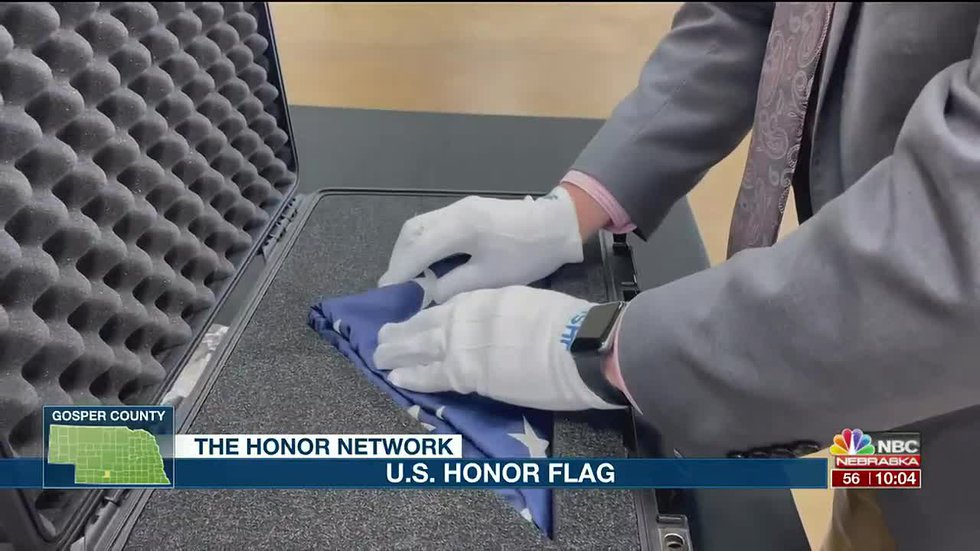 The Honor Network pays tribute to the deceased fire chief

ELWOOD, Neb. (KNOP) – The family, friends and community of deceased Fire Chief Darren Krull of Elwood came together Monday in Krull’s honor. At the Elwood Civic Center in Elwood, in a 10 a.m. ceremony, the community stood in silence as local law enforcement and The Honor Network Founder and President Chris Heisler shared the very special story behind the American Flag of Honor, before presenting it to Chief Krull’s family. to have.

The American Flag of Honor has been ground zero to honor the victims of 9/11. He has traveled to the battlefields of Iraq and Afghanistan. He has traveled millions of miles, including several trips around the Earth in 2011 aboard the space shuttle Atlantis. And now it’s in Elwood, Nebraska. Although it was hand-delivered at thousands of funerals and memorial services, it was only given on very special occasions, and only to America’s heroes of law enforcement, firefighters, emergency medical services and the United States Armed Forces.

And while the reason for his visit is devastating, it is important, Heisler says, and even necessary, to honor the service and sacrifice of these men and women who rush forward fearlessly in the face of danger.

Fire Chief Darren Krull has spent years rushing into danger to keep others safe. His time as a firefighter was over 37 years. Most recently, he was a firefighter in Gosper County for the Elwood Volunteer Fire Department. Chief Krull’s aunt said she was grateful to The Honor Network for bringing the American Flag of Honor to honor her nephew.

“I’m grateful to them for doing this and honoring his love for firefighting and the passion he had.”

“It’s just a sign of what he’s spent 37 years doing. And it just means the world to us.

Two of Chief Krull’s uncles traveled to Elwood to attend the ceremony and attend their nephew’s funeral, scheduled for Wednesday. They say they are “very proud of Darren”. Arizona’s Bob Wells is grateful to everyone who remembers his nephew in such a special way. Omaha’s Chuck Wells hopes others will recognize those who “run into trouble” to help others.

“My wife and I had him as a ring bearer 48 years ago, so it’s been a long time. He was five years old. And I remember he was having a lot of trouble that day because we couldn’t find no shirt in his size. So he had a lot of trouble with it. It was a big shirt, and it bored him to death. We got through it and he’s been special in my heart ever since. I have two girls, and I love and honor and cherish them very much, but Darren was kind of my boy and I appreciate everything he did for me He was always the friendliest kid around And when we We had family gatherings, he was always an organizer. He always made sure everyone had something to eat and something to drink and that everyone knew each other. We’re so proud of him. And with a little luckily, his memory will also be cherished by other people.

“He helped and returned help. And he gave his life. So we brought the United States Flag of Honor to honor him and share it with his family and this community. And we always say to people, if in their darkest hour, if we can provide some comfort, that sacrifice will absolutely not be forgotten. This is what we do. And it’s personal, to have been to Ground Zero and to have seen the sacrifices made by the thousands of people who were there. Being in Iraq and Afghanistan and seeing the sacrifice of our soldiers and then traveling across the United States in the military. My wife, Cindy, and I being in the military and federal law enforcement and municipal law enforcement see so many men and women taken from us in horrific ways whether it’s an accident or police officers, firefighters or paramedics. shoot. This flag stands for that badge, stands for that courage, stands for that honor and integrity, and everything we do is about what they do and why they do it.

Heisler said it was an incredible opportunity to honor Chief Krull. This man served as a firefighter for 37 years, selflessly serving his community for years, and then came to Elwood with that same selfless service without hesitation.

During the ceremony, Gosper County law enforcement removed the flag from its holster. They took turns holding it gently above their hearts. Officers showed it to those present, rotated the flag, saluted the flag, and replaced the upright flag in its case for all to see. Special gloves are worn whenever it is handled as part of the ceremony, and to keep oils out of the flag. Gloves are worn only once. After the presentation, the gloves are often given to the family as a memento of the honorable occasion. Chief Krull’s wife received two pairs of gloves.

The funeral of Fire Chief Darren Krull is scheduled for Wednesday, April 13 at 10:30 a.m. at Our Redeemer Lutheran Church in Elwood.