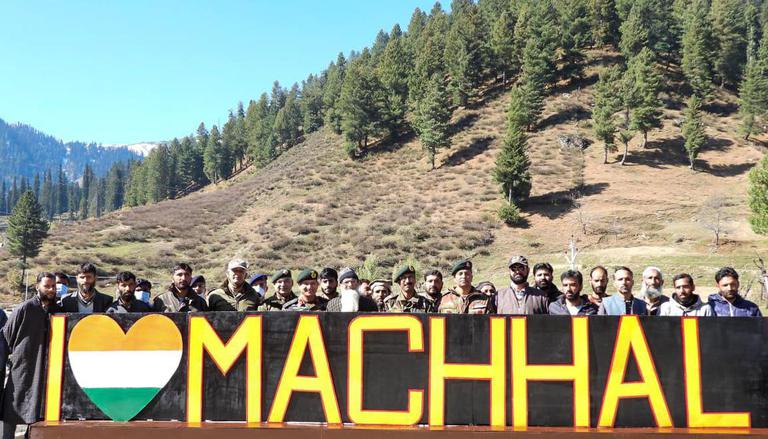 The 140-foot-high national flag is one of the tallest flags in the country and it is also the tallest national flag in the Kashmir Valley. The national flag in Macchal, Kashmir is 56 feet long and 37 feet wide. Earlier in October, to celebrate Gandhi Jayanti, the largest Khadi national flag in the world was installed in the city of Leh on October 2, 2021. The flag was inaugurated by the Lieutenant Governor of Ladakh RK Mathur and the Chief General of the Manoj Mukund Naravane army. To pay homage to the martyred soldiers of the 56 RR (MARATHA LI), a Smriti Sthal named Maratha Smriti Sthal was inaugurated with the flag on the occasion of Machhal Mela. The Smriti Sthal was built to represent one of the greatest forts of Shivaji Maharaj, namely the Fort of Raigad.

The walls of the Smrithi Sthal were used to honor fallen soldiers as the walls bear engravings of the names of 32 warriors of 56 RR (MARATHA LI) who sacrificed their lives for the nation. The layout of the memorial also consists of a 14-foot stone wall, a statue of Chatrapati Shivaji Maharaj, a surrounding water basin and four lamps.

A 150-foot-long bridge to connect nine villages to the Kupwara LoC was also inaugurated at Machhal in Kashmir. The bridge was built by GREF and was given the name of Captain Ashutosh Bridge. Captain Ashutosh was the brave soldier who sacrificed his life on November 8, 2020 during a counterterrorism operation in the region. He also received Shaurya Chakra posthumously on the occasion of Independence Day this year.

Learn more about the Machhal Mela

The Machhal Mela has had several events that started almost two months ago. Competitions such as cricket, volleyball, pony racing and drawing were held and people took an active part in the events with total enthusiasm. For today’s last performance, the NNC cadets marched cleverly which wowed the crowd. Major General VMB Krishnan, YSM, general officer commanding 28th Inf Div was invited as guest of honor for the mela. At his side, several members of the army, civilian dignitaries and members of civil society were also present.