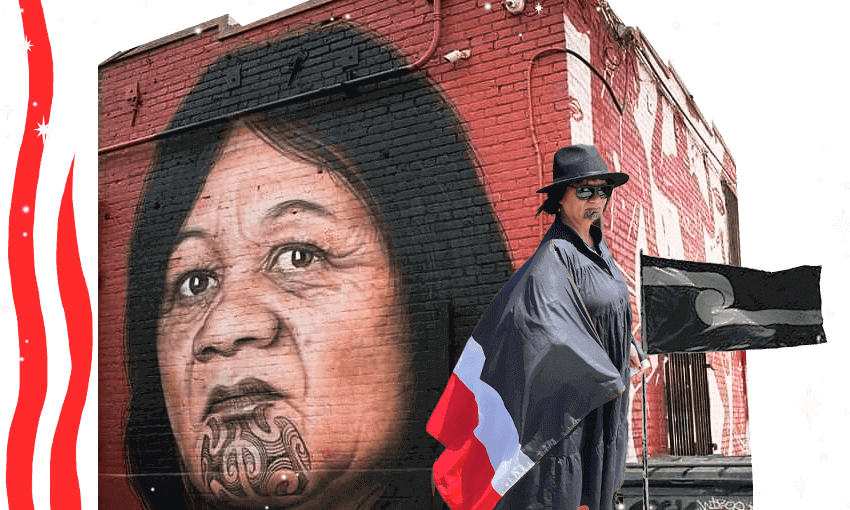 The lasting legacy of the tino rangatiratanga flag

With the striking red and black background and bold white koru in the center, the tino rangatiratanga flag is a must-have. It has become a well-known symbol of colonial resistance since its inception in 1990. Whether flying in Waitangi or facing Richard Seddon on the streets of Paremata, the Tino flag stands as a visual reminder of the Treaty’s broken promises.

In the Maori text of Te Tiriti o Waitangi, recognized by the United Nations Declaration on the Rights of Indigenous Peoples as having legal precedence over the English text, the Maori specify that they will retain tino rangatiranga (self-determination, sovereignty, autonomy, self- government, rule, control and power) over whenua, kāinga and taonga.

This obviously did not happen, so the struggle for the tino rangatiranga continues and the relevance of the flag remains. Arguably, it is more visible than ever, with a new generation of activists embracing the symbol and wearing it proudly.

Unfortunately, as its popularity has grown, so has its appropriation. In recent times, fringe activist groups have co-opted the Tino flag for protests unrelated to the kaupapa Māori. Flags are also mass produced for profit, like AliExpress for $11.

Linda Munn, one of the three original designers of the flag and the last living kaitiaki, wants the flag’s original kaupapa to remain.

“The main thing is that our employees feel united. It’s their flag, but don’t tear it down, ask anyway.

A symbol of liberation and identity

The flag was born out of a design competition organized by Te Kawariki, a Far North activist collective in 1989. They wanted to create a Maori national flag that would fly in Waitangi the following year for the 150th anniversary of the signature of Te Tiriti. o Waitangi.

According to the story, the flag design was drawn by Hiraina Marsden on a napkin in a wharekai. It was then used as the basis for 10 flags of the same design which were hand stitched by Linda Munn and Jan Dobson, supported by many others. Linda Munn points out that the flag is the result of a group initiative, acknowledging the influence of Hilda and Hone Harawira within the Te Kawariki collective.

“It was supposed to take away from the colonized flag, the New Zealand flag. The main point of designing something that is uniquely Maori is that it’s for Maori and represents Maori,” says Munn.

Some of Te Kawariki’s kaupapa sets included that it should never be worn on someone’s behind, that the dimensions could not be changed, and that it should be used to support the Māori kaupapa, not at personal purposes. The original artists also wanted all royalties to go towards creating a wānanga of the arts in Ngāpuhi.

As the flag’s last surviving kaitiaki, Munn says she appreciates people approaching her first and explaining their kaupapa.

“There is a process, it’s not huge, I don’t make people jump through hoops. The main thing is that they have to give back. They have to pay first.

“Give back to your marae, you kōhanga reo, your community. If you work with the homeless, earn money, feed them, house them. He must return to the community.

At the service of the collective

Along with his work to protect the mana of the Tino Flag, Munn is dedicated to aiding rangatahi and wāhine Māori.

“It’s something I’ve been involved in since I was a child,” she says, which, in simple terms, is “keeping our women safe and alive.”

“Last year and in 2020 we lost girls that I personally worked with, they were killed and it really upset us. It really hurts us when our girls… get caught.

This is the harsh reality of the negative impacts of colonization that Munn works tirelessly against. Beyond that, she also sits in hapū trusts that support rangatahi through education by finding places for them in kura kaupapa and getting them out of “traditional bullshit”.

“If there is a need, there has to be something to help them. Who better than our own people to help them? To help them know that there is another way to learn… to come back to the marae and learn the wānanga space, not colonized in the classroom.

Mahi you as healing

Munn’s mahi has always been about wāhine, she says. This extends to her downtime – she is an avid painter and says it helps clear her mind. She is currently preparing works for an upcoming exhibition which she is curating alongside Robyn Kahukiwa and Tracy Tāwhiao. The exhibition ‘Wāhine Māori – The Art of Resistance’ features the works of 12 Maori women who opposed colonization and the impact on their culture, history, language and belief systems.

From her garage studio, she poured her own whānau mamae caused by colonization onto the canvas in the form of the work Hineteiwaiwa.

“My grandmother died as a result of poor care in a hospital after giving birth, after being beaten by my grandfather [causing her] to go into labor early. She hemorrhaged to death in Kawakawa Hospital in a hallway.

“So it’s acknowledging her and all of our other wāhine who haven’t been properly cared for in a health service.”

Her other piece is about stories her grandmothers used to tell, passing on the whakapapa, which she says is central to her work. “It’s just me painting memories. It’s all art. It is a visual tool. It’s like when you are in the marae or the wharepuni, and you look at the carvings, you are able to tell whakapapa.

Learn more about the history of the flag here.

The exhibition Wāhine Māori – The Art of Resistance opens on March 13 at the Northart Gallery, Auckland.