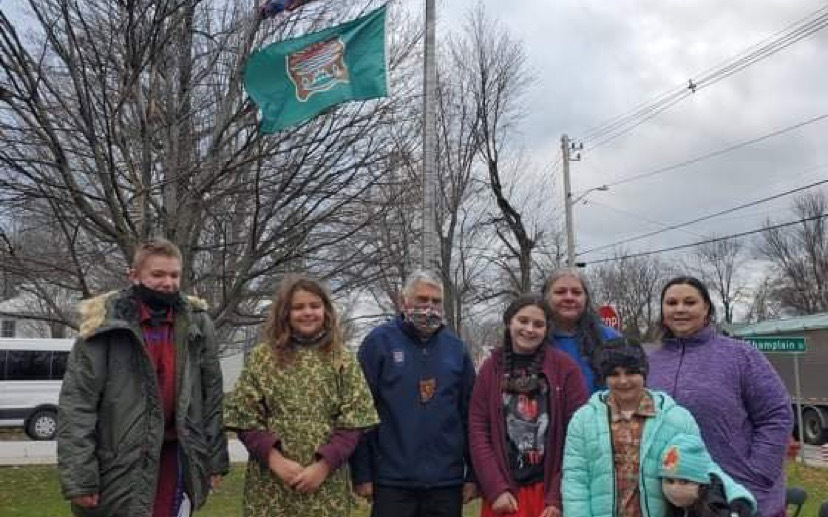 The Missisquoi flag hoisted in Alburgh, a first for schools in Grand Isle

For the first time, a Missisquoi flag flies in a school on the islands of Lake Champlain.

The Alburgh Community Education Center hosted a flag-raising ceremony on Tuesday with Chief Missisquoi Richard Menard and members of the Abenaki Circle of Courage, an after-school program focused on service and Indigenous arts and culture.

Menard and sixth grade student Sage Gould, who is Abenaki, hoisted the flag in front of the Alburgh school community. The ceremony also included chants and percussion.

While Missisquoi flags have previously been hoisted at schools in Franklin County, Menard said it was the first time the ceremony has been held at a school in Grand Isle County.

The Abenaki Nation of Missisquoi is one of the four tribes recognized by the state in Vermont.

â€œThis is one of the steps to recognize that the Abenaki are here, and that they have been here for thousands of years,â€ Menard said in an interview.

Menard said there is a larger Abenaki population in Alburgh than one might think. There are probably 40 or 50 Abenaki students in the city school, he estimated, and at least 70 or 80 Abenaki families in the city itself.

Some members of the Abenaki community are reluctant to identify themselves publicly as members because of discrimination and the legacy of the eugenics movement in Vermont, Menard said.

In March 1931, the state legislature approved a law authorizing the sterilization of those considered â€œweak-minded,â€ â€œimbeciles,â€ or â€œidiots,â€ and the Abenakis and French Canadians were among the targets of eugenics.

According to the University of Vermont – which employed Henry Perkins, leader of the state eugenics movement – 253 people have been sterilized under the law.

The Legislature passed a joint resolution earlier this year to apologize for these actions.

â€œA generation ago this would never have happened,â€ Benay said. “But it’s happening now, and it’s important.”

Benay said he has started working with officials from the Grand Isle Supervisory Union to improve the way Indigenous history and culture is taught in schools on the islands.

For example, district officials want to make sure that when schools teach social studies units about Indigenous peoples, the stories they tell are historically accurate, said Megan Grube, director of programs, of the supervisory union teaching and technology.

In general, said Grube, the district wants to find more ways to celebrate “all the cultural contributions that indigenous peoples have had on the islands.”

â€œDiversity should not be controversial,â€ said Benay. â€œWhen we look at the flag that is hoisted in Alburgh, we look at the possibilities inherent in children. “

If you would like to keep tabs on education news from Vermont, sign up here to receive a weekly email with all of VTDigger’s reports on higher education, early childhood programs and politics. education K-12.