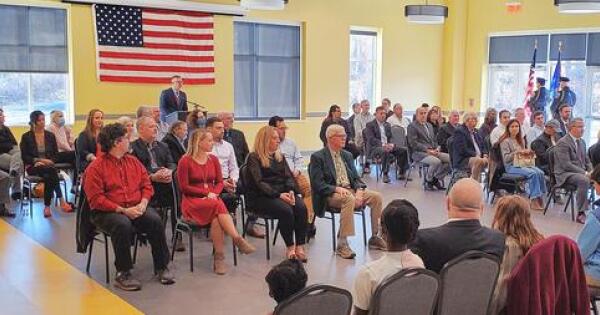 About two-thirds of those elected or re-elected earlier this month, along with nearly 100 friends, family and supporters attended an oath of office ceremony held at the Newtown Community Center on Saturday, November 20.

â€œThank you all for coming today for this wonderful occasion,â€ said Halstead. â€œThank you to all the newly elected municipal officials who are ready to serve our beautiful city of Newtown. “

Newtown resident and former State Senator David Cappiello served as master of ceremonies and introduced the Newtown Police Department Honor Guard, who walked to the front of the room.

As they presented the U.S. and Connecticut state flags, Eva Haley, 10, led the pledge of allegiance, followed by Grace Lynch as she sang the national anthem.

Pastor Lori Miller of Newtown United Methodist Church then walked to the podium before inviting everyone to take a deep breath as she recited a prayer.

â€œWe thank you for those men and women who have heard the call to serve this community in leadership positions. Bless them, O God, that they be guided by your wisdom and motivated by your love, â€she said in prayer.

the members of the board of directors of the town hall of Edmond, Marie Smith and Betsy Paynter, and (to fill a vacant position of two years) Armel Kouassi;

member of the Police Commission Scott Cicciari (Brian Budd was not present);

After taking the oath, Rosenthal thanked the many people in attendance who helped make the event special.

â€œOver the past four years, I have had the pleasure of working with boards and commissions. With a common goal, together we have accomplished a lot for our beloved city, â€he said. â€œI am also fortunate to have dedicated staff in all of the city’s departments. Frankly, I couldn’t do what I do without them. They put all their hearts into serving the community day after day.

He thanked Capeci and Crick Owen, who served on the Selectmen board with him during the last term.

Rosenthal stressed that they “have been a pleasure to work with” and they have always put Newtown first in everything they have done. He then invited his two colleagues to share their perspective on their time serving Newtown.

Crick Owen started off by saying that when she heard she would be speaking today, she reflected on what the community means to her. It’s not just the sense of belonging that connects us, but she said, â€œCommunity is a place we can call home.

Crick Owen and many previous generations of his family have made Newtown their home. She reflected on how she saw her parents setting an example in the community by volunteering their time to help others and work in the city.

â€œI’m so glad my parents instilled these values â€‹â€‹in me. It is an absolute pleasure to continue to give of my time and my efforts to this dear community, â€she said.

Speaking about what makes people get elected, she joked that it certainly wasn’t the money – because there isn’t any, except in the position of the first elect. She shared how people serve because they care.

Crick Owen added, â€œWhile each of us has our own party affiliation, what is common among all of us is that we work for every resident of Newtown. I hope that each of us can first work together as neighbors, for the good of our city.

She concluded her speech by thanking and congratulating all the elected officials.

Capeci followed up on his remarks by first expressing what an honor it is for him to serve Newtown.

He thanked many for helping make it happen, including voters in the Third District, his family, friends and the Newtown Republican City Committee.

â€œFor the past four years, I have been honored to serve my fellow Newtown citizens on the Selectmen Board of Directors. Dan, Maureen and I worked really well together. We have had great success, â€said Capeci.

Jokingly, he noted that in business, what he does, moving from the Board of Selectmen to a Legislative Council position, would be considered a â€œdemotionâ€.

However, Capeci explained, “I have decided that I can do more good to serve Newtown in my former role on the Legislative Council than a selectmanâ€¦ as a newly elected member I will proudly represent the Third District.”

At the end of the oath of office, Rosenthal returned to the podium to thank once again and specifically shared his gratitude to his wife and three children who have been by his side during this time.

Cappiello concluded the event by telling the new sworn officials: â€œTo all of you, congratulations and good luck for the next two years.

Everyone present was then invited to enjoy a wide range of food and refreshments.

Journalist Alissa Silber can be reached at [email protected]

Eva Haley, 10, holds the hand of City Clerk Debbie Aurelia Halstead to support him as she brings everyone to take the oath of allegiance at the Oath of Office ceremony on November 20. – Bee photo, Silber

Grace Lynch sings the national anthem during the Oath of Office ceremony, held at the Newtown Community Center on November 20. â€”Bee Photo, Silber

Scott Cicciari raises his right hand as he is sworn in as the new member of the Newtown Police Commission. Next to him is Newtown resident and former State Senator David Cappiello, who was the master of ceremonies for the oath of office ceremony. â€”Bee photo, silver

More than 100 Newtown residents, supporters and newly elected officials listened to brief remarks from First Selectman Dan Rosenthal after gathering for an oath of office ceremony at the Newtown Community Center on November 20. â€”Bee Photo, Voket