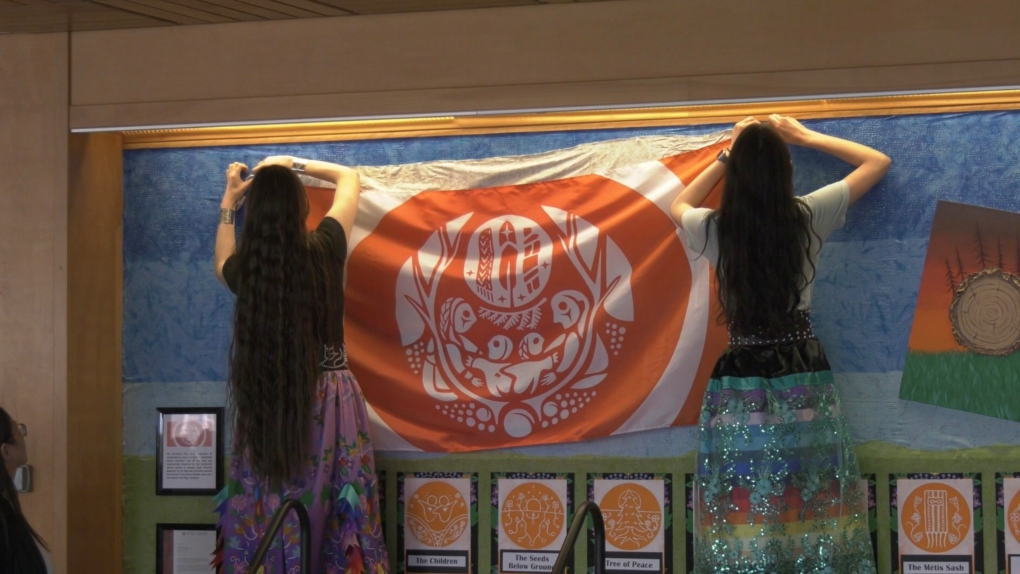 The Survivors Flag gets a big presentation at the YRHS

Kendra Helfrich, the YRHS teacher who initially started the process to have the flag gifted to the school, ended up using the time to plan something very special for the school and its surrounding communities.

So the survivors’ flag sat in Helfrich’s office until Jana Martinuk, the school’s art teacher, thought of displaying it on a board in the school’s main hall. The moment this idea was shared, Martinuk had an idea.

“(She said) I know the student who would be able to design it,” Helfrich recalled, thinking of young Cowessess member and school’s 11th grader, Cree Delorme.

Delorme, a straight student at YRHS, jumped straight into the project, with Helfrich describing it as a “really natural conversation”, adding the whole vision not only to the design of the board, but several other ideas began to develop. .

With many of the school’s students personally affected by the repercussions of residential schools and the intergenerational trauma that followed, the school knew it had to do something special.

Led by Delorme, the project turned into a full presentation full of speakers, as well as emotional presentations and the unveiling of the flag.

Delorme remembers walking through the hallway of the main YRHS foyer when she came across Martinuk.

It was the first time the project had been presented to him, and at that time, it was not a “big project”.

“It kind of snowballed from there. We started talking, exchanging ideas, and then it turned into this, because art is a part of it,” Delorme explained. “But the event, I feel like it’s something that’s really helpful to the community.”

The artwork ended up being all the meanings of the flag, broken down into singular and similar pieces of the flag. The pair designed it all, creating the board.

The event included several community members and dignitaries and was held at YRHS’s Anne Portnuff Theatre.

Cree Delorme (center), Jana Martinuk and Kendra Helfrich are pictured. Delorme was a major driving force behind the project which eventually led to a full display of the Survivor Flag at Yorkton Regional High School. (Brady Lang/CTV News)

Delorme brought in the two teachers, along with Federation of Sovereign Indigenous Nations (FSIN) Second Vice-Chief Dutch Lerat, his aunt, Clorice Delorme, and Max Delorme to speak at the event, which looked at the impacts of residential schools and how to move forward with reconciliation.

Lerat, a residential school survivor and member of the Cowessess First Nation, spoke about the past. Delorme herself spoke of the present, and her Aunt Clorice, who also works for the Good Spirit School Division, of the future.

Delorme said what Lerat and Clorice expressed during the presentation will really stick with him.

“What struck me was how Clorice and Dutch explained that reconciliation comes from both sides, and that there is a middle ground where you both have to listen to each other and hear what the other has to say, and have a lot of compassion and empathy for what the other is trying to say,” she said.

“Because it’s really important and communication in general and that was such an important thing. Reconciliation is just having a space where you can talk and exchange ideas in an honest environment.

“The truth opened the door, and a lot of people are talking now. It opened up a safe place for us to talk,” she said at the event.

The creation of this project was not an easy task for Delorme and his family, as well as for the teachers who animated it.

The research to create the event meant looking, talking and understanding more deeply Delorme’s past and his family’s past.

By creating a safe and open space and having these discussions in the open air; Delorme said the community can work together and continue to heal.

“Just having these personal stories, because I feel like anyone could say what happened at boarding school is bad, it’s so bland. I feel like I have a personal story of someone who has gone through that is so much more impactful, both emotionally and informationally, it was really hard, for research. I feel like as a non-native you hear about them and say, “Oh, these are people”, but as a native it’s my people who are affected by the repercussions boarding schools. It really hit home,” she said.

Young Delorme was a leader at YRHS, someone other students consider an early success. Having her lead the work really had an impact on the teachers involved in Helfrich and Martinuk.

“Cree is one of the most phenomenal young people I’ve had the privilege of working with. She is incredibly driven and extremely humble. She is, for someone so young, so connected to who she is. With a strength and quiet power that you don’t see in most adults,” Helfrich said.

“I sincerely believe that having had the privilege of working not only with the Crees, but also with his family on this project, it is a direct result of his family, his community (and) the people who raised her.”

Cree is the niece of Chief Cowesses Cadmus Delorme. After the event, when asked if politics might be in Cree’s future, she responded by laughing and saying “maybe”.

Another deeply held Cree goal is the primary goal of the Grade 11 student after graduation.

From a young age, through a career investigation project, she considered becoming a medical examiner, in order to do her part to help the crisis of missing and murdered Indigenous women and girls.

“My career aspirations stem from a part that is so connected to me. Being a young Indigenous woman myself, I am almost four and a half times more likely to go missing or be murdered in my lifetime…I know that a lot of our people may not be comfortable having their loved ones examined by someone who isn’t I’m not indigenous and being a medical examiner will give me the chance to end families, this happened to their loved ones and hopefully find justice for them,” she explained.

“I know the cultural practices, and I feel like they would be a lot more comfortable with me, an Indigenous woman. »