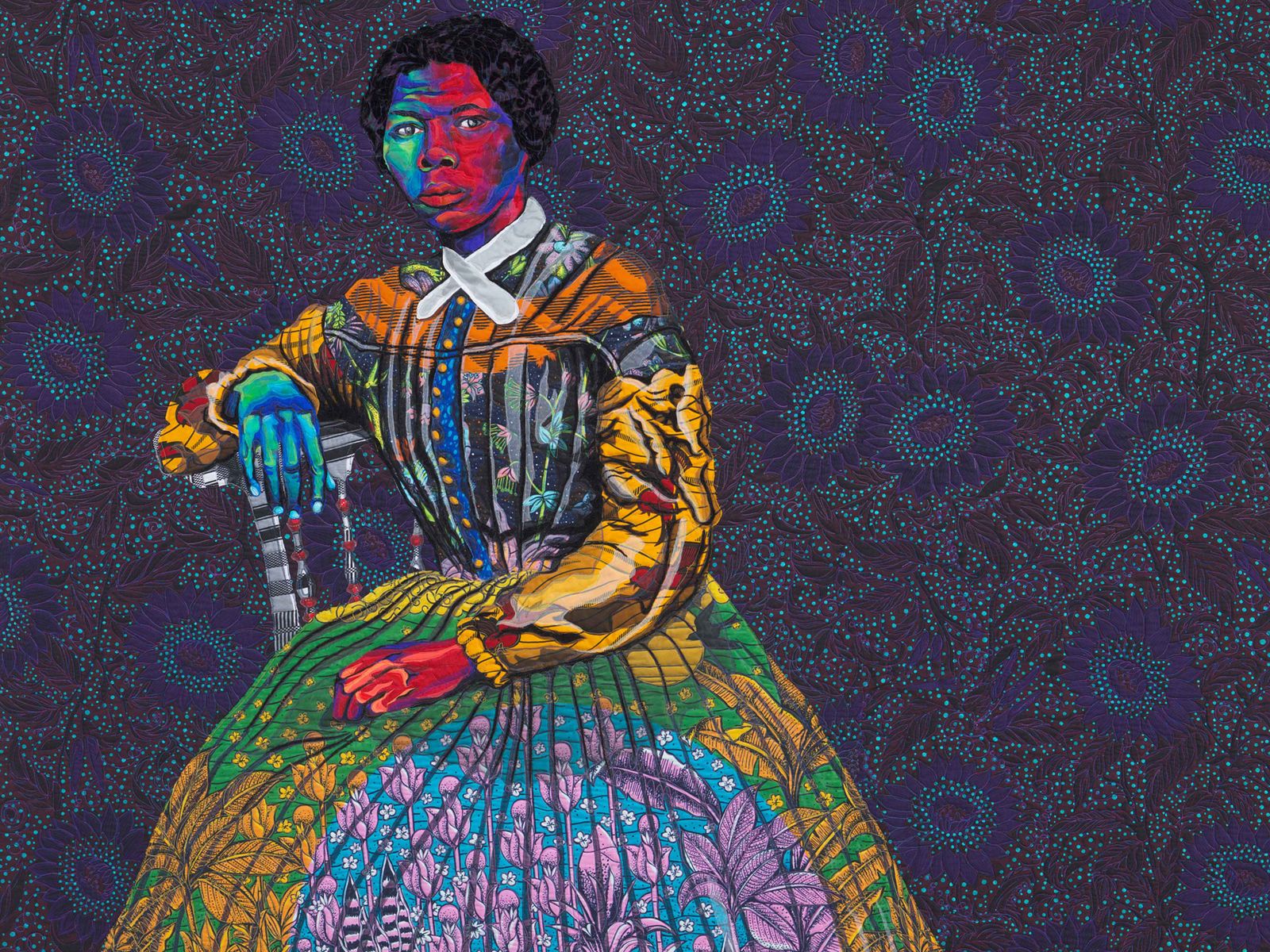 The righteous determination of a young Harriet Tubman gazes out these days from two different floors of the Smithsonian National Museum of African American History and Culture in Washington. One is a rare business card-sized photograph of the civil rights hero that dates from the late 1860s and was only recently discovered in a photo album of abolitionists jointly acquired by the museum and the Library of Congress in 2017. A second version of the image – on a larger scale commensurate with its heritage – is the vivid fabric tapestry over seven feet tall, a work commissioned by artist Bisa Butler, which is one of the highlights of the museum’s new visual arts exhibit, â€œReckoning: Manifestation. Challenge. Resilience. “

The exhibit recontextualizes the museum’s art collections to paint a picture of activism and resilience, which culminates in Breonna Taylor’s famous portrait of Amy Sherald who featured on the cover of last year. Vanity Show.

Set in a dark room on its own, the image of Sherald, in cool blues and subdued grays, evokes the kind of muffled reverence akin to the gallery space where Emmett Till’s coffin is on display several stories higher. low.

In contrast, the work of Butler, I will prepare a location for you, explodes quite in color, with Tubman’s hands depicted in bright blue, purple and red, symbolizing freshness, calm and strength as well as power and strength.

In Butler’s hands, Tubman’s gingham skirt blooms with colors and images, through which, according to Tuliza Fleming, the museum’s chief visual arts curator, represents “this idea of â€‹â€‹moving from a state of slavery to a free state, where one walks in the thickets of the undergrowth, through the flowers, up to the sky and finally up to the sleeves, which show birds, which represent the eventual freedom of African slaves all throughout their journey.

At the base of the reimagined skirt is an orange lion, “which represents the strength and leadership of Harriet Tubman as she leads the slaves to freedom,” says Fleming, who was the show’s lead organizer.

Butler, whose living exhibit of 20 Quilted Portraits just ended at the Art Institute of Chicago, says, â€œMy process is that I find a photo in an archive, sometimes it’s just a look in the eyes of someone who lets me know that there is more to this person than the title of the photo. And I like to sketch this person and start thinking, what else can I say about this man? Are his hands rough and worn? Looks like he maybe worked with his hands? Is there a thoughtful look in his eyes? Are her legs crossed in a very elegant way? I start to imagine the personality and choose fabrics that I think could tell a story about that person.

Butler says that when she first saw Tubman’s photograph in the museum’s collection, it was an eye opener. The image is the earliest known photograph of Tubman and was bound in an album that belonged to Quaker abolitionist Emily Howland. â€œI have always considered her to be the older woman. And in this picture, she’s about my age now, in her forties. It allowed me to see Harriet, the woman. And in the clarity of the photo, too, you can see her hands, the veins in her hands, the beautiful dress she is wearing. You see the waves in her hair.

â€œIt allowed me to see something that is rarely written, or at least I hadn’t heard of it written: What was Harriet’s personality? Was she gentle and soft-spoken? Was she energetic? Was she funny? Was she witty? I don’t know these things. But in this photo you saw something of this person and their expression that was so beautiful that I thought it was such a privilege to try to capture it.

Butler uses cotton, silk, and velvet that have been quilted and applied, often using Vlisco Dutch Wax and Kente fabric to denote Africa. Born in New Jersey, Butler graduated in painting from Howard University, but turned to fiber art while pursuing her masters at Montclair State University.

In a statement published alongside her portrayal of Tubman, she writes: â€œWe are still in the same fight as Harriet Tubman’s: the fight for black people to be free and treated equally before the law.

Another new acquisition for “Reckoning” is that of David Hammons The man no one killed, commemorating graffiti artist Michael Stewart, who died in 1984 from injuries sustained while in police custody. Hammons depicts Stewart in a stencil printed on a wine box. This is one of two works by Hammons in the exhibition, the other is a 1990 rendering of the American flag in the Pan-African colors of black, red and green.

The American flag makes several appearances in the exhibition in variations that include a tiny paper version with X’s of perhaps the most famous artist on display, Jean-Michel Basquiat, the 1980s superstar painter and contemporary of Andy Warhol. Patrick Campbell’s devastating 2014 watercolor painting, with hanging figures in red stripes, titled New Age of Slavery, is placed among the photographs of Devin Allen, Zun Lee and Sheila Pree Bright taken during the Black Lives Matter protests in Baltimore, Ferguson and Atlanta.

Women activists take center stage in the exhibition. Tubman is depicted a second time in the Alison Saar model made for the Harriet Tubman Memorial in Harlem. Montgomery bus boycott organizer Euretta R. Adair can be seen in a graphite rendering by Lava Thomas. Angela Davis is depicted in the bold silkscreen print by Wadsworth A. Jarrell Sr. Revolutionary and Anonymous Women March for Justice in 1958 Charles Alston Oil Walking.

A healthy portrayal of female artists also dominates the show, from the woodcuts by Elizabeth Catlett to Meta Vaux Warrior Fuller, including ca. 1921 sculpture Ethiopia is the oldest piece in the exhibition.

Sherald’s poignant rendition of Breonna Taylor lends powerful power to this lofty goal. On March 13, 2020, in a failed raid on her home, Louisville police gunned down Taylor while she was asleep. His death helped fuel a growing protest that went global with the murder of George Floyd two months later. Sherald, the Baltimore artist best known for the official portrayal of former First Lady Michelle Obama, depicts the young medical student looking directly at the viewer, a gold cross hangs from her neck and an engagement ring as her future fiancÃ© didn’t have a chance to give her sparks off his finger.

Sherald commissioned designer Jasmine Elder to make the turquoise dress honoring Taylor’s keen fashion sense. Since his death, a movement has been built to demand justice. â€œWhen you talk about violence against women and police brutality, she has become a face of that movement,â€ Sherald said in a statement accompanying the painting.

It is an art exhibition reinforced by the direct links with history which echo in the famous inaugural exhibitions of the museum, “Slavery and freedom”, “Defending freedom, defining freedom”, â€œA Changing America: 1968 and Beyondâ€ and â€œMaking a Way Out of No Way,â€ among others, these exhibits have drawn millions of people to the museum’s many galleries on the National Mall since it opened five years ago.

â€œOne of the most unique facets of our gallery is the fact that we are a museum of history and culture,â€ says Fleming. “It’s really important because we have the context from which we can prepare visitors to see some really difficult and important works of art.”

“Account: Protest. Challenge. Resilience â€is on display in the new American Experience and Visual Art Gallery at the Smithsonian’s National Museum of African American History and Culture in Washington, DC