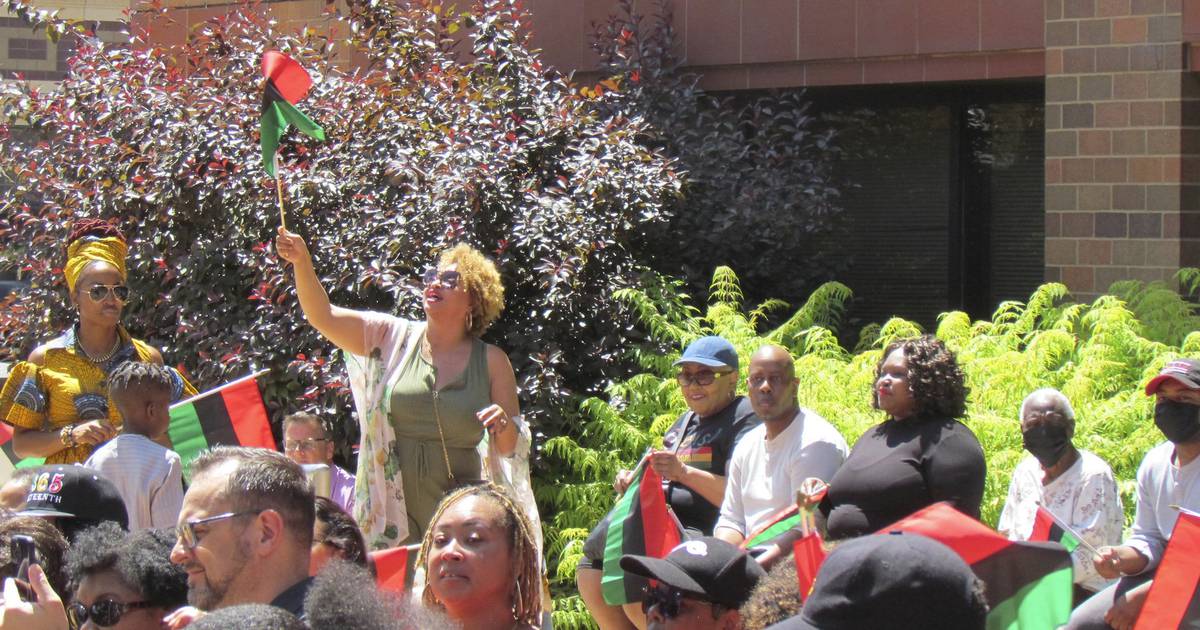 About 200 people gathered in downtown Aurora on Sunday for a flag-raising event to mark the June 19 holiday.

The holiday commemorates June 19, 1865, the day Union troops arrived in Galveston, Texas and informed the last enslaved African Americans that the Civil War was over.

Raising the June 19 flag in the city to celebrate the end of slavery held personal significance for Aurora Mayor Richard Irvin.

“It’s important to me because one of those slaves was my great-grandfather,” Irvin told the crowd.

The city invited U.S. Army Lt. Col. Shane Doolan to be the guest speaker at the event, in honor of the military’s role in Juneteenth. Doolan is commanding officer of the U.S. Army Recruiting Battalion in Great Lakes, Illinois.

“Juneteenth is not just for us. It’s for the whole world. When one is oppressed, all are oppressed,” he said.

“We can’t talk about American history without talking about June 19, the history of black people as slaves and the impact that 200 years of slavery still had today. Today is a pivotal day that changes course,” said Clayton Muhammad, Aurora’s director of communications and equity, before the flag-raising ceremony.

“People will say that slavery was so long ago, but when it is so systemic and embedded in the very fabric of a nation, we must address it directly, at least with the symbolic recognition that slavery is over. “, did he declare. “The challenge for everyone is what to do in the future. That’s why we’re here at Aurora.

Irvin presented several awards at the event, including the Juneteenth Heritage Award to the local Masonic Keystone Lodge 15 in recognition of the lodge’s commitment to preserving Aurora’s black history.

African American Men of Unity’s Ricky Rodgers, who raised the flag at One Aurora Plaza during the event, was also honored with a Juneteenth Heritage Award.

“We cannot talk about the past without acknowledging progress as a nation and future leaders,” Muhammad said. “A lot of us have been in Aurora for a long time. At some point, you have to recognize the young people.

Crystal Mafaindi came to Aurora for the Sunday event from Gary, Indiana.

“Today is a happy day,” Mafaindi said. “We are a blessed people despite our struggles.”

Linda Girardi is a freelance journalist for The Beacon-News.