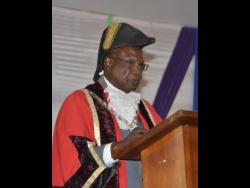 Williams cited the misuse of the Jamaican flag and lack of attention when playing the national anthem as examples of nationwide disrespect that need to be corrected. He was speaking at the start of last Thursday’s monthly meeting of the St James Municipal Corporation [StJMC].

“For too long we have seen Jamaicans give little or no respect to national symbols and emblems. How many times have you attended a function with the national anthem being played or sung, and there are people who just go about their business, showing absolutely no respect? Also, we shouldn’t have the Jamaican flag draped over a car seat or used as a tie,” Williams said.

“In this year of the Diamond Jubilee, the time has come for all of us to stop and take a hard look at how we treat our emblems and symbols. Once we as a people make a concerted effort to fix these things, we can undoubtedly become the diamond of the Caribbean,” he added.

In May, the Permanent Secretary of the Department of Local Government and Rural Development, Marsha Henry Martin, warned that failure to follow state protocols regarding national symbols amounted to a lack of respect for Jamaican pride and for the government institution.

According to the National Library of Jamaica, the Jamaican flag should be considered a sacred emblem of the nation and therefore should never be allowed to touch the ground or the ground. Neither should be used for purely decorative purposes on anything that is for temporary use and likely to be thrown away, except on state occasions.

Regarding the national anthem, the protocol states that all persons must stand at attention during the playing of the anthem, while those in uniform must salute. The singing of the anthem should also be part of the ceremony of raising and lowering the national flag at the beginning and end of term in schools and during independence celebrations.

Williams also called on people to show greater respect for the nation’s leaders and uphold the ethics of Jamaica’s ancestors.

“The issue of showing respect to our leaders is another issue that needs to be addressed head on. For too long, we continue to show an unacceptable disrespect for the leaders of our country. Leadership is not about titles or profiling; it’s about leading the way and leading by example,” Williams said.

“I believe that at 60, Jamaica and Jamaicans are on the verge of becoming great. Seemingly small things like values, ethics and positive attitude matter and are some of the greatest intangible assets we have. can use to make our country great.

Jamaica’s Diamond Jubilee celebration will be held under the theme “Restore a Nation for Greatness”.

The StJMC will begin its series of Emancipation and Independence Day celebrations on July 31 with a church service at Burchell Baptist Church in Montego Bay, followed later the same day by an Emancipation Vigil, to be held on Sam Sharpe Square.

On Independence Day, August 6, the StJMC and the Jamaica Cultural Development Commission will hold the Spirit of Independence Jamaica 60 Civic Awards Ceremony at Sam Sharpe Square, where 12 St James-based residents and/or institutions will be recognized for their outstanding contributions in various sectors. The following day, August 7, a Grand Independence Gala will be held at Harmony Beach Park in the west of the city.