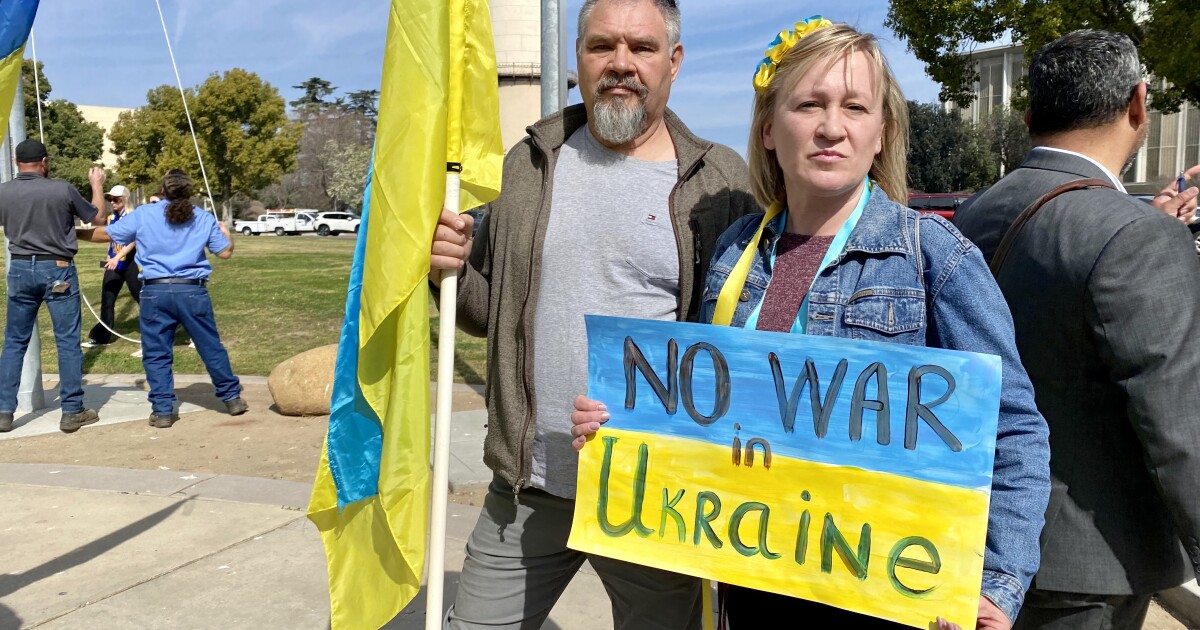 As the flag of Ukraine was raised in Eaton Plaza in downtown Fresno, several members of the Ukrainian community sang the country’s national anthem. Many held flags, signs and were dressed in the country’s bright yellow and blue colors.

They were there with the leaders of the city and county of Fresno who denounced the Russian invasion. Fresno County Supervisor Nathan Magsig said it’s important for city leaders to take a stand.

“We cannot remain silent on this issue. We need to be involved not just as a community, but as a nation and do everything we can to support our NATO partners and also to support Ukraine,” he said.

“This flag raising is not only a symbol of hope for Ukraine, but rather a crystal clear message that we, the City of Fresno, stand up for democracy as a whole,” a- he declared.

Mayor Jerry Dyer has called Putin an “evil man” who needs to be stopped. He praised what he called the bravery and resilience of the Ukrainian people and welcomed all of the country’s refugees to Fresno.

“Not only do we stand in solidarity with you, but our doors will be open to you in the city of Fresno and Fresno County,” he said.

Svetlana Lysenko was born in Ukraine but immigrated to the United States in 1993. She and her husband have lived in Fresno for almost 30 years. She attended today’s ceremony holding a sign saying ‘No war in Ukraine’.

“Like everyone here, you know, my heart is broken,” she said.

Lyssenko has relatives who live near Kyiv, but has since lost contact with them due to internet outages in the area. She was able to reach a cousin by text message who says the situation has gotten worse, “very difficult”.

“It’s very, very painful to understand, you know, that your loved ones, your country is going through this stuff,” she said. She described today’s ceremony as touching.

The flag will fly for seven days.