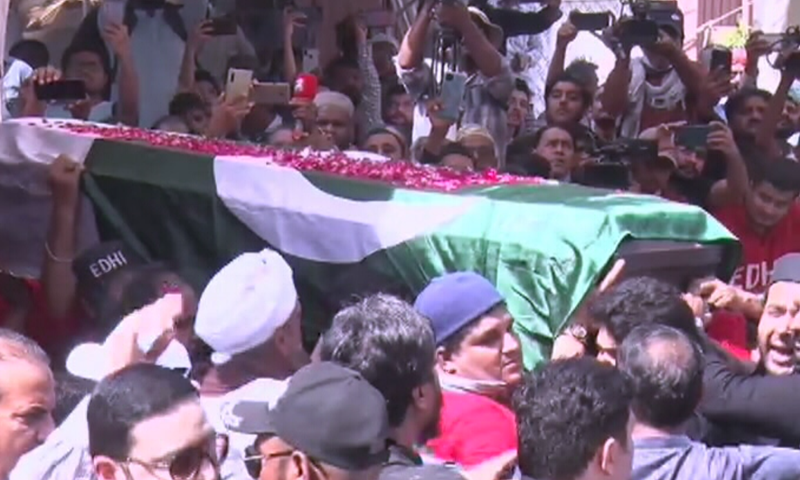 The body of legendary comedian Umer Sharif was transported from Istanbul to Karachi on Wednesday morning for the final rites to be performed in his hometown.

The coffin containing his body was draped in a Pakistani flag and was taken to Edhi’s mortuary before being transported to his residence.

Sharif’s funeral prayers will be offered at 3 p.m. at Umer Sharif Park in Clifton block-2, according to his son.

He will be buried next to the grave of Shireen Jinnah, sister of Quaid-e-Azam Muhammad Ali Jinnah and Fatima Jinnah, in the cemetery of Abdullah Shah Ghazi.

Sharif’s death at the age of 66 while undergoing medical treatment in Germany on Saturday had grieved the nation, with condolences pouring in from various circles including politicians, showbiz figures and television stars from the across the border.

According to aviation officials, Turkish Airlines flight TK-708 took off from Istanbul at 12:53 am, while the scheduled flight landed at Karachi airport around 5:33 am. The plane carrying his body left Munich for Istanbul on Tuesday before making the subsequent trip to Pakistan.

Sharif’s son Jawad Umer and other friends of the late TV legend received the body at the airport.

An overview of his profile

Sharif was born on April 19, 1955. He started his career as a stage artist using the name Umer Zarif, but later renamed him Umer Sharif. Two of his popular comedy plays were Bakra Qistoon Pe and Buddha Ghar Pe Ha.

Sharif received national awards for best director and best actor in 1992 for Mr. 420. He received ten Nigar Awards and remains the only actor to receive four Nigar Awards in a single year.

He also received the Tamgha-e-Imtiaz for his contributions as a comedian, actor and producer in the entertainment industry.

The veteran actor’s state of health had become a matter of national concern last month after he made a video appeal to Prime Minister Imran Khan to help him obtain a visa to travel abroad for medical treatment.

The federal government had assured him that he would help and the Sindh government also intervened, sanctioning 40 million rupees for his treatment.