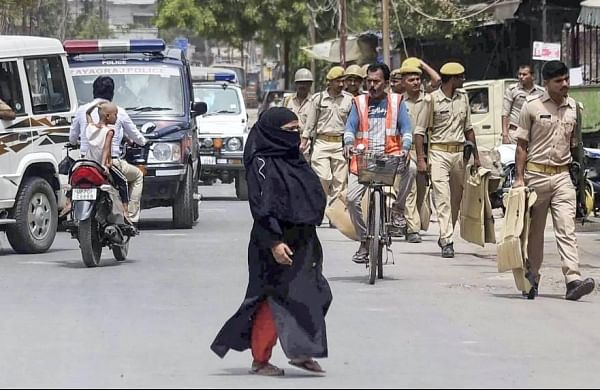 LUCKNOW: Police in Uttar Pradesh have so far arrested more than 300 people in eight districts of the state, including Prayagraj and Saharanpur, in connection with Friday’s violence during protests against controversial remarks on the Prophet Mohammad by now-suspended BJP spokesperson Nupur Sharma.

In a statement issued here on Sunday evening, the Additional Director General of Police (Law and Order) Prashant Kumar said: “316 people have been arrested in eight districts of the state and 13 FIRs have been registered in this regard in nine districts. “.

Giving details of the district, Kumar said, “92 people were arrested in Prayagraj, 79 in Saharanpur, 51 in Hathras, 34 in Ambedkar Nagar, 35 in Moradabad, 15 in Firozabad, six in Aligarh and four in Jalaun.”

Of the 13 cases, three cases each were recorded in Prayagraj and Saharanpur, and one each in Firozabad, Ambedkar Nagar, Moradabad, Hathras, Aligarh, Lakhimpur Kheri and Jalaun, the senior officer said.

UP Chief Minister Yogi Adityanath, who has often spoken of how under his rule the state was rid of frequent riots, issued a stern warning against anti-social activities on Saturday.

“The strictest measures will be taken against the anti-social elements involved in the chaotic efforts to spoil the atmosphere in various cities in recent days,” he said while giving directives to officials.

“There is no place for such antisocial people in a civilized society. No innocent person should be harassed, but not a single culprit should be spared,” he said.

In a tweet in Hindi, Mrityunjay Kumar, the chief minister’s media adviser, said on Saturday: ‘Remember the unruly elements, every Friday is followed by a Saturday’ and posted a photo of a bulldozer demolishing a building .

Under Adityanath, the state administration cracked down on criminals and rioters, seizing or razing their properties.

His detractors have often accused him of adopting tough tactics.

On Friday, people threw stones at police officers in Prayagraj and Saharanpur during their protests after Friday prayers in mosques.

Sharma was suspended by the BJP as several Islamic nations denounced her comments on the Prophet in a televised debate.

In Saharanpur, protesters shouted slogans against Sharma and demanded his death sentence.