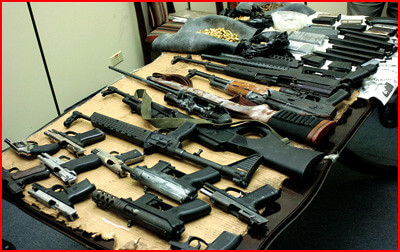 WASHINGTON – The United States House of Representatives on Friday passed a ban on semi-automatic firearms – the weapons used in multiple mass shootings in the past three months – on a close party line vote.

With vote 217-213, The law project, HR 1808, will head to the equally divided Senate, but is unlikely to make progress there, as the ban would require all Democrats on board plus 10 Republicans to override a filibuster. Sen. Chuck Schumer, the Senate Majority Leader, has not announced whether he plans to put the gun ban to a vote.

“Every year, more children die from gun violence than from any other cause,” House Speaker Nancy Pelosi said on the floor of the House. “Our nation has witnessed indescribable horror as assault weapons have been used in massacre after massacre.”

All but five Democrats backed the ban. Only two Republicans voted for: Brian Fitzpatrick of Pennsylvania and Chris Jacobs of New York.

Ron Kind (D-La Crosse) of Wisconsin was one of five Democrats who split from their party and opposed the ban. The others were Reps. Jared Golden of Maine, Kurt Schrader of Oregon, and Henry Cuellar and Vicente Gonzalez of Texas.

The push to ban semi-automatic firearms came after they were used in mass shootings in Uvalde, Texas, where 19 children and two teachers were murdered, and in Buffalo, New York, where a supremacist white murdered 10 blacks in a grocery store. A semi-automatic weapon was also used in a July 4 shooting in Highland Park, Illinois, where seven people were killed.

“These weapons have no place in our communities,” he said. “There are more mass shootings than days in the year. This is a uniquely American problem.

This year alone, there have been 372 mass shootings, according to the Gun Violence Archives.

The assault weapons ban was originally slated to pass alongside several bills that would provide funding to local police departments, but progressive Democrats have raised concerns and pushed for more accountability measures in the police legislation.

“I’ve heard from the civil rights community and I have serious concerns about two police bills that we may consider this week,” said Rep. Andy Levin, a Democrat from Michigan, wrote on Twitter. “We shouldn’t be pushing them forward unless they include strong accountability and oversight provisions consistent with those of the George Floyd Justice in Policing Act.”

The initiatives come as Democratic leaders attempt to repel to be seen as a party that wants to “defund the police”, a slogan that many members have disavowed, as well as Biden. Republicans have called Democrats insufficiently supportive of police ahead of the midterm elections.

At a weekly press conference on Friday, Pelosi, speaking out about progressives’ concerns, said the police bill was not “funding without accountability.” In the House, she said after the August recess, Democrats would pass the policing and public safety bill package.

The United States House Judiciary Committee past banning weapons out of his committee last week in a party line vote.

The bill, if enacted, would not ban current semi-automatic weapons that people own, meaning current gun owners would have their guns grandfathered.

House Republicans opposed to the bill argued that the bill would take semi-automatic weapons away from current owners, but Democrats said that was wrong because they would be covered by the grandfather clause .

During debate in the House, Representative Guy Reschenthaler, a Republican from Pennsylvania, declared the bill unconstitutional, calling it a “take on arms”.

“Law-abiding Americans use guns every day,” he said.

Representative Deborah Ross, a Democrat from North Carolina, denied that people would lose their guns, as many Republicans continued to say.

“It just prevents future assault rifle sales,” she said, adding that the guns “are not designed for recreation, they are designed for combat.”

Representative Jim Jordan, a Republican from Ohio, also accused Democrats of “coming for your guns.”

The White House Published a statement Friday in support of the bill.

“40,000 Americans die each year from gunshot wounds, and firearms have become the leading cause of child death in the United States,” the statement said. “As President Biden has repeatedly asked, we must do more to stop this gun violence and save lives.”

House Democrats have held numerous hearings on gun violence in the United States, most recently this week when House Oversight and Reform investigated the profits gunmakers have made from semi-automatic weapons. The CEOs of two arms manufacturers said during the audience that they played no role in the mass shootings that used their products.

The passage of the bill follows another firearms bill that Biden signed the law end of June following the mass shootings in Texas and New York. This bill, the Bipartisan Safer Communities Act, includes eight provisions.

This bill provides $750 million for states to enact “red flag laws,” which allow courts to temporarily remove a firearm from an individual who poses a threat to themselves or others, among other provisions; provides a historic $11 billion in mental health services for schools and families; and requires those under 21 who wish to purchase a firearm to submit to a background check that considers, among other things, a review of mental and juvenile health records.

When Biden was a member of the Senate, he backed a 10-year ban on assault weapons that passed in 1994, but it expired a decade later and Congress never renewed it.

Research by a group of injury epidemiologists and trauma surgeons has shown that “between 2004 and 2017 – the last year of our analysis – the average number of annual deaths attributed to mass shootings was 25, compared to 5.3 during the 10-year ban and 7.2 in the years before the ban. ban on assault weapons.

Get morning headlines delivered to your inbox