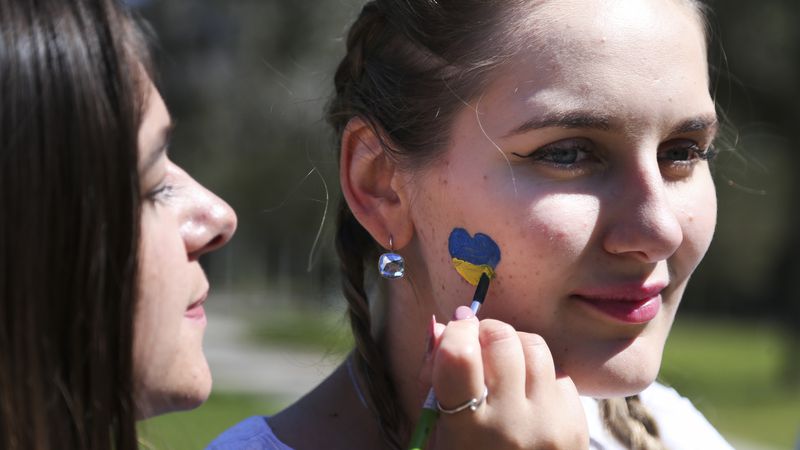 USF student watches from afar as her father defends Ukraine

TAMPA — Ukraine’s armed forces and its people have been hailed around the world for resisting the Russian invasion.

The daily challenge bulletins are a source of pride for Anastasiya Pylypenko, a Ukrainian student studying linguistics at the University of South Florida, while reports of death and destruction fuel her anxieties.

Her father, Alex Pylypenko, is a retired colonel working with the Ukrainian army in Lviv. Since the invasion, she says, he has worked non-stop, traveling from town to town to help organize their nation’s defenses.

For 26-year-old Anastasiya, it’s hard to watch from afar with no way to provide direct support to her people and her country.

His family has US residency. Her parents might flee here, but she knows her father will not abandon his country during this crisis.

“He’s not on the front line, but he’s still, you know, risking his life,” she said. “I feel very proud (that) he never considered leaving the country.”

Anastasiya is doing what she can to raise awareness of the devastating conflict and to call for more support for her country. She was one of about 50 students, mostly Ukrainians, who held a peace rally on the USF campus in Tampa on Wednesday.

The graduate student, who speaks five languages, wore a vyshyvanka, a traditional Ukrainian embroidered blouse with puffed sleeves. Her blond hair was braided with yellow and blue ribbons, the national colors of her country. A Ukrainian flag was painted on his cheek.

Students held placards with messages such as “Ukraine is and will be” and “Shelter the sky”, a call for the West to impose a no-fly zone over Ukraine to protect its citizens against the bombings.

Related: A Ukrainian married a Russian in Tampa. Then the invasion began.

She constantly thinks of her parents, especially her mother, Iryna, who suffers from an inflammatory disease that can cause certain bones in the spine to fuse together. Without regular injections, his mother will suffer from severe pain. The daughter fears that her mother will not be admitted to a local hospital for treatment if she is overwhelmed treating injured civilians and soldiers.

His family lives in Lviv, a city famous for its museums, concert halls, galleries and art festivals. Located in western Ukraine, about an hour from the Polish border, it had been considered a safe haven in the build-up to the invasion as it was far from disputed areas on the Russian border.

Stay up to date with what’s happening in Tampa

You’ll get a roundup of the biggest news from the Tampa community twice a week.

Today, Anastasiya thinks no place in her country is safe.

Russian forces have stepped up shelling of towns and civilian targets in recent days. The UN recorded 406 civilian deaths, including 27 children, and 801 injuries in Ukraine on Monday. Kherson, a city of 285,000, has fallen to Russian troops, according to reports. More than 2 million Ukrainian refugees have fled their homes.

“No one will celebrate this year”

More than a week after the start of the invasion, Anastasiya’s life seems unreal, her concentration thousands of miles away.

Since the invasion began, she has been unable to think of falling asleep until she knows that her family and friends have survived another night. That means staying up until 2 a.m. to hear from them. Yet she finds it hard to fall asleep when there are always new developments happening overnight from her homeland.

At the start of the invasion, she focused on reading Western media as she wanted to know how her country was perceived. Now she mainly follows her friends at home who post images on their Instagram accounts from Kyiv and Kharkiv showing victims and people fleeing for safety. There are videos that show explosions and bombed structures, including a university building in Kharkiv.

“It’s the people who live there, you know, who experience these things,” she said. “And it’s, it’s like the first news you want to see because it’s actually live and it’s happening there.”

Related: How to Join Tampa Bay’s Efforts to Support Ukraine

She found herself crying, usually in private, but once while shopping at the Publix in Tampa Palms.

Surrounded by people pushing shopping carts full of groceries, their lives going on as normal, Anastasiya said she just is broken down. Everyday life suddenly had no meaning.

“I was like, people are really, like, dying right now,” she said. “Everything is happening, and here I’m grocery shopping and people are decorating for Easter.

“But there is no Easter in Ukraine. No one is going to celebrate this year.

Seeing her homeland under attack, she thinks about all the times she read about countries in other parts of the world caught up in conflict or natural disasters. She wonders if this will mean more to people in the United States than a brief period of sympathy expressed in a handful of social media posts.

It’s different when the images of destruction she sees on her phone are of your own homeland, she said.

“I understand that as much as people want to care right now, they can’t quite fathom how awful it is to see the streets where you grew up or your college burnt to ashes.”