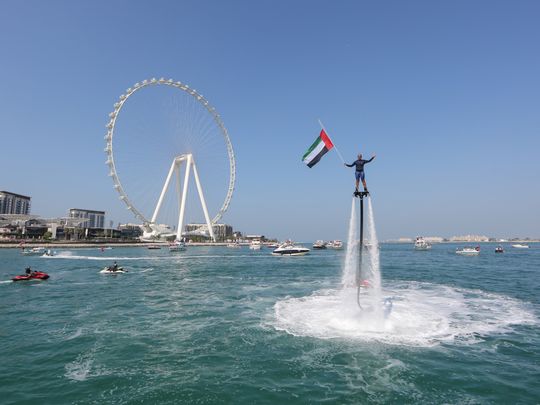 By Paul V. MaganaDecember 2, 2021No Comments

The second celebration of “UAE National Day – Navy Edition” featured a visual treat that infused a patriotic love for the UAE among attendees and spectators.

Paying special tribute to the UAE’s 50th anniversary, a 50-meter-long flag was hoisted on a yacht moored near Dubai’s Bluewater Island, which symbolized the glorious UAE voyage. Fifty other flags were raised simultaneously on yachts moored at the iconic Dubai Marina.

Hosted by advertising and event management company Ad&M and D3 Yacht, the event saw all the yachts circle for the flag-raising ceremony, after which dignitaries, guests and residents of the marina gathered. also attended a number of water sports activities.

A fly boarder at one end of the flag as it waved majestically against the backdrop of the world’s tallest and tallest observation wheel – Ain Dubai. The national anthem played in the background instilled a palpable sense of patriotism into the air at Dubai Marina.

Dr Aman Puri said, â€œMy warmest greetings to all my Emirati brothers and sisters and to all residents of the United Arab Emirates. The United Arab Emirates is a symbol of peaceful coexistence and prosperity for the whole world. Today we are also celebrating the best values â€‹â€‹of the country that the world can learn from.

Shameer Mohammed Ali, Managing Director of D3 Yacht, said: â€œTaking part in the celebration of the Golden Jubilee is a source of great pride for all of us. We wanted the second edition to be bigger than the first and we achieved that. Last year a 49-meter flag was hoisted, but this year we hoisted a 50-meter flag and over 500 special guests attended the event.