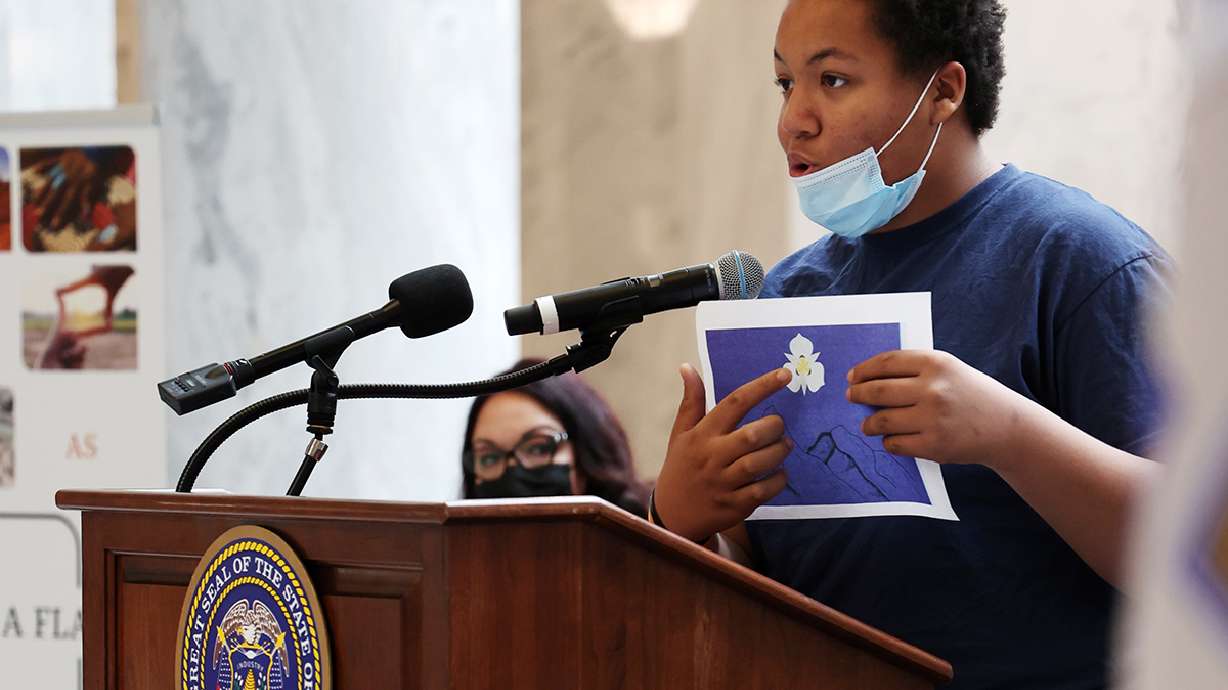 Waving colors of a new design for the Utah state flag

(Todd Anderson. Noah Shaw, an 8th grader at Hillcrest Junior High and member of the Murray Boys & Girls Club, explains his flag design at the More Than A Flag launch event at the Utah State Capitol on January 19. He envisions sego lilies serving as the North Star in his design.)

The current flag of Utah, adopted in 1913, features the state seal, name, “Industry” slogan, an iconic beehive, sego lilies, and the dates 1847 and 1896. A white shield is held in the talons of a golden eagle, the country’s national bird, punctuated by six arrows representing the Native American tribes of the region, all these symbols surrounded by gold.

“We are Americans, promise”

Most telling of all is the inclusion, rare in state flag symbols, of two crossed American flags. Adding Stars and Stripes iconography was a way for citizens of the fledgling state to announce “We’re Americans, we promise,” said Reeve, a history professor at the University of Utah. .

Utah’s statehood has been disputed due to the perception that the local government operated as a theocracy under the control of an upstart religion known for the practice of polygamy. It took six failed petitions over 46 years for Utah Territory to be accepted as the nation’s 45th state.

The current flag symbolizes the pioneering history of The Church of Jesus Christ of Latter-day Saints, but it “does not include the various people who have always claimed this place as their own,” Reeve said. The historian, who holds the Simmons Chair in Mormon Studies at U., was the guest of a recent edition of the BusinessElevated Podcast hosted by Pete Codella, Director of Communications for the Governor’s Office of Economic Opportunity.

Reeve and Codella volunteer sub-committees guiding the flag initiative. “More than a flag is an opportunity to reflect on what unites us — as Utahns,” Utah Gov. Spencer J. Cox said at a January kickoff. “I believe this conversation can help bring us together. A new flag can help us reframe our ideas about what’s important – and remind us that our state’s greatest days are yet to come.” (Read: “For those who ask: “Why now”?“)

The January 19 event at the Utah State Capitol opened with a presentation of the flag by a Native American color guard led by Arnold Lano of the Utah Inter-Tribal Veterans. The color guard displayed the state and national flags, as well as the flags of Utah’s eight tribal nations. The presentation signifies the effort to hear indigenous voices as part of the flag initiative, while acknowledging the region’s long history before statehood.

Sen. Daniel McCay, who co-sponsored the legislation with Rep. Stephen Handy establishing the Utah State Flag Task Force, said the iconography of the current flag is not as distinctive as the state it represents. It is one of approximately 30 state flags that feature a seal on a blue background. “We can do better,” McCay said. “The new state flag can be simplified with a design that is both innovative and memorable.”

Rep. Handy added, “This is not an effort to take away our history at all. It’s an effort to modernize a symbol of our great state.”

Senator Luz Escamilla, a member of the task force, highlighted the enlistment of volunteers from across the state. “We will listen to people of all ages, cultures and backgrounds,” she said. “Together, we want to hear what unites us as Utahns. Together, we will listen to all the voices that represent our changing population.”

Beyond colors and themes, the initiative aims to generate excitement for Utah’s common identity. “I love that the campaign for this is called More Than A Flag,” said Maria Sykes, executive director of Epicentre, a nonprofit community in Green River, another volunteer. Sykes was interviewed by Moab radio station news director Molly Macello KZMU. “Because it’s definitely like, ‘How can we get a ton of perspectives on something that’s going to be so iconic?'”

About the flag design process

Utahns are invited to submit flag designs or themes and colors to flag.utah.gov until April 30. By mid-March, more than 2,000 design ideas had been submitted. Utah schools, public libraries, municipalities and tribal leaders have received resources to invite community members to participate. Submission forms and educational resources are available in Chinese, Korean, Nepali, Spanish and Vietnamese. (Learn more about the process here.)

After the deadline, the volunteer Initiative Design Review Sub-Committee will review the submissions and recommend finalists. A handful of professional artists will also be hired to create designs inspired by suggestions from the public.

In August, Utahns will be asked to provide feedback on the final designs on flag.utah.gov. Then the task force will recommend the final designs to the Utah Legislature and Governor for adoption. The current flag may continue to fly as the governor’s flag, following a precedent set in the state’s early history.

Calling submissions from the public could be as important as the final selection, said Indigenous designer Kassie John, who sits on the design review subcommittee. She is considering submissions of designs of flags sketched on restaurant or cafe napkins. She is happy that the process goes beyond professionals to seek ideas from young people and elders.

“There are so many different communities here that make up what we call Utah,” John told Marcello of KZMU in Moab. “So there are these different relationships that people bring that I think will come together in the process.”

John says this process could – and should – raise complicated questions about the history and identity of the state. Certain symbols, such as Utah’s ubiquitous beehive and the state’s nickname, are considered by many to be synonymous with the LDS Church. Could a beehive symbol be included in a design that also signifies the inclusivity of other cultures and identities?

At a recent design subcommittee meeting, John asked what would happen if the new flag design didn’t include a beehive. Is this Utah? “We had a three-hour discussion about ‘what if the hive disappears?’ But I think these are important conversations,” John said. “I’m all about design and social reform and I really recognize that we have different peoples, and sometimes highlighting those key cultural differences doesn’t divide us but only makes us stronger.”

While many Utahns say they are invested in the current flag, a recent investigation reported that most respondents did not see themselves represented in its design. Even respondents who liked the current flag said they weren’t likely to display it at home or in the office or wear it on a hat or t-shirt.

Historically, as a territory, Utah has never created a flag, and its official banner was not adopted until 15 years after its creation. And then, for nearly nine decades, the state flew officially non-compliant flags. A flag adopted by the Utah legislature in 1911 designated the year 1847—when LDS pioneers entered the Salt Lake Valley—on the shield. A hand-stitched flag made in 1922 placed the year below the shield, and apparently that’s the pattern flag companies have followed for decades.

Historian Ron Fox identified the error after finding a misclassified 1903 Utah flag in state archives. The Utah Legislature corrected the error in a 2011 resolution. (For more state flag history, listen to the Podcast Speak Your Songmoderated by Brad Westwood, Utah’s senior public historian.)

This curious episode offers a precedent for updating the flag. And to give a historian the final word, according to Reeve, the initiative represents a “fantastic opportunity for Utahns to understand the symbolism that represents us in the 21st century.”

Visit flag.Utah.gov to review suggestions for flags design, download Educational resources for students from kindergarten to high school, or for submit flag ideas.