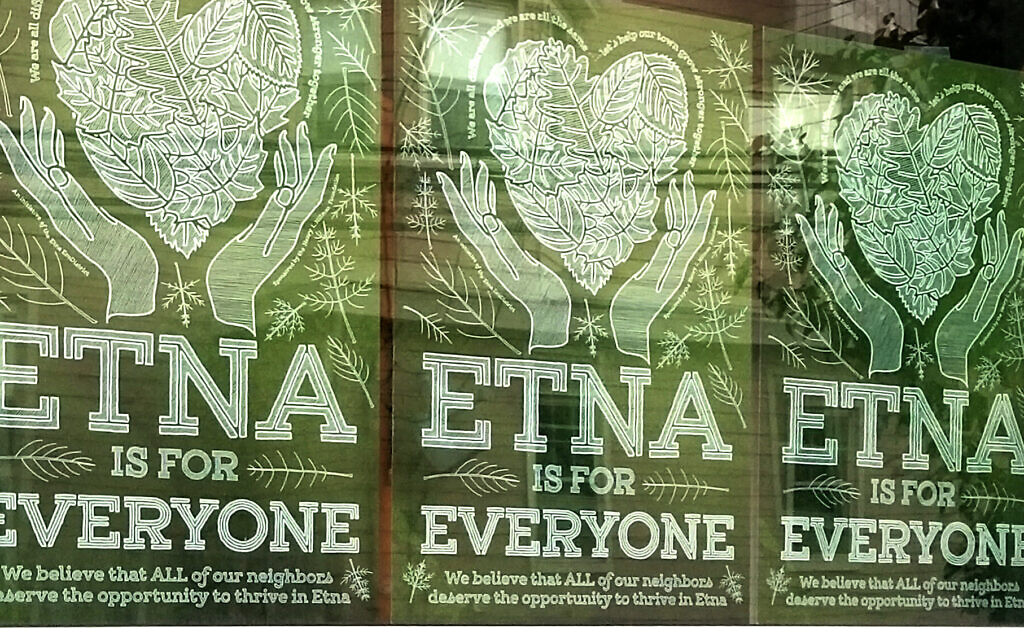 We need a village: communities react to anti-Semitism

Megan TuÃ±Ã³n first learned of a flag sporting a swastika flying over a porch on Mount Etna from a December 14 post on social media by Jessica Semler.

“I saw him this Tuesday evening,” TuÃ±Ã³n said. â€œThe next day, it seemed like everyone knew. ”

Semler and TuÃ±Ã³n are both members of the borough council for the small town across from Pittsburgh on the Allegheny River. The flag was hanging from a house in the Semler neighborhood, and she wanted to do something that would make an immediate statement.

Semler and TuÃ±Ã³n decided to start a fundraiser and reprint signs, created in 2018 by TuÃ±Ã³n’s husband Robert, which said “Etna is for everyone”. Semler’s GoFundMe campaign has raised nearly $ 1,700 at time of publication, and they are in the process of printing 120 panels.

TuÃ±Ã³n is also the director of the Etna Community Organization (ECO), where she works to bring people together and encourages them to lead various initiatives, she said.

â€œI hope we get a positive response to something very negative and show that the community does not support this flag or what it stands for, and that Etna is for everyone,â€ TuÃ±Ã³n said.

Robert TuÃ±Ã³n said that while the police response to a hate incident in a small community like Mount Etna can be immediate, the community also wanted to quickly show their support for those affected by the hate symbol.

â€œThere are Jewish residents who are hurt by the display,â€ said Robert TuÃ±Ã³n. â€œThere is also a large LGBTQ community. We have heard from this group the most because they understand the history of the use of the swastika and understand that while hate exists it affects us all.

Robert TuÃ±Ã³n is an architect with the Rothschild Doyno Collaborative who, through his work, maintains relationships with members of the Jewish community in Pittsburgh. He contacted leaders of the 10.27 Healing Partnership, the Holocaust Center of Pittsburgh, and the Jewish Federation of Greater Pittsburgh. The outcome of this awareness will be a webinar titled â€œCountering Antisemitismâ€ on Monday January 10th. The program will address not only concerns about anti-Semitism, but also community trauma and reflections on how to make the community safer and more inclusive.

Nearly five miles away, the Pittsburgh neighborhood of Highland Park is tackling its own recent anti-Semitic incident. On November 29, someone smashed the windshield of Jewish residents’ cars and painted a swastika on the front of their house. That night, their Black Lives Matter and Stronger Than Hate road signs were also stolen.

When Stephanie Walsh, President of the Highland Park Community Council, learned of the attack, she posted on the organization’s website and Facebook page. Part of what she wrote, published on December 1, the third day of Chanukah, urged members of the community to speak out against acts of hatred and words of intolerance.

Walsh said the victims wanted to remain anonymous but the community wanted to help. They offered to collect donations and, although the victims were grateful, they said they did not need financial assistance. Instead, the HPCC collected cards and letters of support.

Inspired by the book “The Christmas Menorahs: How a Town Fought Hate” – based on a true story that happened in Billings, Montana, in 1993 – the HPCC also distributed paper menorahs that could be colored and displayed in the windows, said Walsh.

Like the people of Etna, the neighbors of Highland Park wanted to do more. On December 17, the community hosted the â€œCommunity Dialogue on Countering Antisemitismâ€ webinar, led by Director of Healing Partnership 10.27, Maggie Feinstein.

Feinstein said she was encouraged by the acts of alliance and solidarity at Etna and Highland Park.

â€œWhenever things like this happen, it can look like a snowball going downhill,â€ Feinstein said. â€œAnytime a community says, ‘We’re not going to let this snowball roll down the hill,’ it can be very empowering. It’s beautiful to see people working diligently, relentlessly and collaboratively to try to find a way to stop these snowballs so that communities don’t feel in danger.

Feinstein will also participate in the Etna webinar. She said she was eager to provide all the support the community needs.

Shawn Brokos, director of community safety for the Jewish Federation of Greater Pittsburgh, said community responses like those from Etna and Highland Park are important.

“It’s the community that says we’re not going to let the wrongdoing of some dictate who we are as a community, and we’re going to stand together and be the eyes and ears of one another, which is really useful, â€she said.

Lauren Apter Bairnsfather, executive director of the Holocaust Center of Pittsburgh, agreed with Brokos, recalling events in Germany before and during WWII.

â€œThe Nazis were targeting the Jews, they were obsessed with what they were doing to the Jews, but they took actions that were detrimental to many minority groups,â€ Bairnsfather said. â€œThere were cases where people opposed what the Nazis were doing and it made a difference and saved lives. ”

She said the support shown by community groups and leaders in Pittsburgh did not surprise her.

Laura Cherner, director of the Federation’s Community Relations Council, praised the responses not only from community groups, but also from borough managers.

â€œWe cannot fight the anti-Semitism ourselves, the Jewish community,â€ Cherner said. â€œIt is really important that we have neighbors and allies who support us. The support and the drowning of hate with action and love was truly heartwarming to see. “

A few days after the flag was hung, it was taken down and burned by a group called the Pittsburgh Fasc Watch. Cherner cautioned against such actions.

“It puts the Jewish community in an embarrassing position to have to say, ‘No, don’t burn a Nazi flag,'” she said before noting that violence is never the answer.

â€œThis sense of self-defense justice is definitely not where we want to go,â€ Brokos said. “I understand why people want to react this way, but that’s not what we mean by community support because it only exacerbates the situation and you don’t know how it’s going to impact.”

Robert TuÃ±Ã³n said the progression from hate speech, like the flying of a Nazi flag on Mount Etna, to vandalism, like the one in Highland Park, to outright violence, like the October 27, 2018 massacre, is evident.

â€œWe all live in the city of the Tree of Life,â€ he said. â€œThe Tree of Life is specific to the Jewish people, but it affects all of us as Pittsburghers. It’s so clear, how you go from hateful statements to real, real violence. I think Highland Park’s response, our response, certainly relates to the tree of life, â€he said. PJC

David Rullo can be contacted at [email protected]