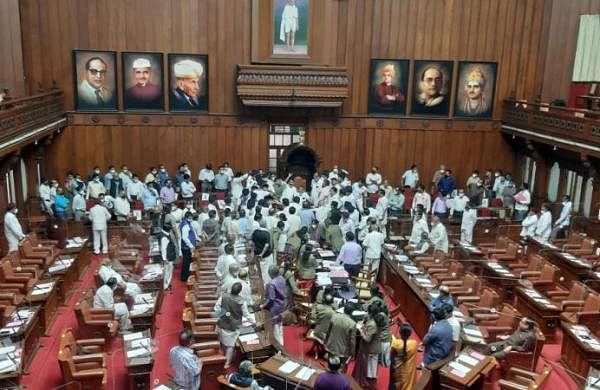 What about farmers’ problems? Ask Karnataka politicians amid hijab and national flag – The New Indian Express

BENGALURU: With the hijab and national flag issue hogging the time of the legislature during the ongoing extraordinary session, several political leaders have expressed concern over other important issues such as bagair hukum land for landless farmers, the Reliable electricity supply, support price for agricultural produce and water woes are ignored.

They also pointed out that the previous session had been dominated by the issue of so-called religious conversion.

A senior Congress official lamented: “The last session was occupied with the issue of conversion and this session is consumed with the issues of the hijab and the national flag. When do we get to the real issues that people care about for the duration of the session?’

Asked about it, Congress leader and former MP Madhu Bangarappa said, “I agree that bagair hukum land is a major issue. I had taken out a padayatra of 130 km and the authorities must take care of it immediately. Many have taken out loans on bagair hukum land and are in a difficult situation. The government must address the problems of farmers and the creation of jobs.”

JDS Chief HD Kumaraswamy said, “There are many important issues like farmers’ issues, water sharing between states, student issues due to school closures, etc. . But no one wants to approach them.

JDS deputy leader in Assembly Bandeppa Kashempur said: “The national flag is important but there are other serious issues that need to be addressed – MSP for ragi, paddy and tur, unemployment and school closures.

Peasant leader Kodihalli Chandrashekar pointed out, “Former CM BS Yediyurappa started his political career a few decades ago by addressing the land issue of bagair hukum. But even now the problem remains unsolved. Farmers barely have two hours of electricity in the morning and two hours in the evening when they need at least 12 hours of power. As we export electricity commercially, can’t the government also consider the needs of farmers? »