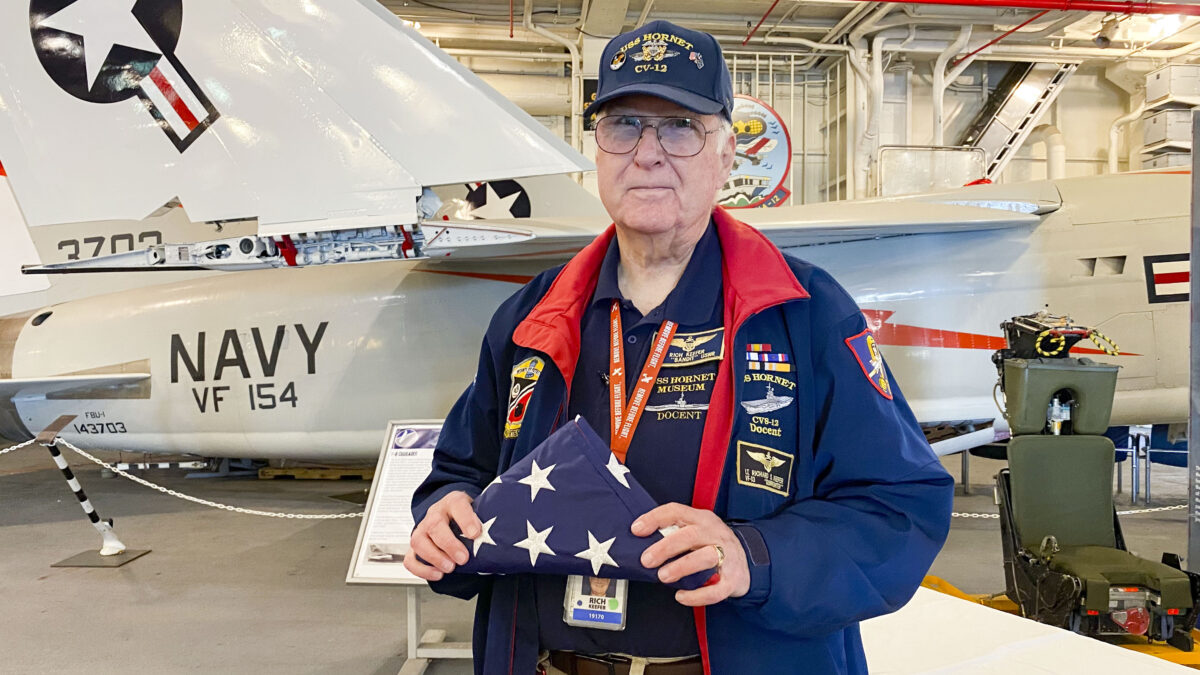 What it means to fold an American flag

ALAMEDA, Calif. – When most people see the American flag, they associate it with freedom, but may not know that there is a process to folding the flag, with a special meaning behind each fold.

Richard Keefer, a professor at the USS Hornet Museum, spoke to NTD Television about the folding of the flag and its importance.

Keefer was a pilot in the 1960s. Now, as a guide, he teaches the younger generation about American military history, which includes flag folding. Keefer said the flags he folded were usually for fallen soldiers.

“There is a script that we use that is given to use as a recommendation, which basically says we are sorry for your loss, but on behalf of the President of the United States, Secretary of the Navy, Secretary of the Marine Corps, we feel your pain; [on] on behalf of a grateful nation, we would like to accept the flag for your deceased,” Keefer said.

Keefer remembers the first time he folded an American flag for a member of the Navy.

“He was integrated into the battalion of Marines in Vietnam and on the day he was killed rescued about 47 of his Marines and died in the same action. He got a silver star for that,” he said.

His station didn’t have an honor guard at the time, so they had to form one to hold funerals for the dead.

“I’m looking at a young woman who was about 19 with a baby he had never seen. … It’s very much alive in my mind right now, and it was a very, very hard thing for me to come out and choke on, but I got through it,” Keefer recalled.

The folding of the flag consists of 13 folds, each with a meaning and a verse. Each fold is neat, precise and aligned.

“When you’re done with the folds, it has to look a certain way. You can’t have visible white, for example, or visible red on the fold,” Keefer said. , or the canton field of the flag, so that it represents the final fold, which is the respect of God.”

By the 13th trick, the flag should look like a triangle. Keefer said the triangle represents the hats sailors and servicemen wore during the Revolutionary War.

The flag is then presented with both hands to the honor guard, with the long side facing out and the point towards you. Keefer says coming up with the point first is disrespectful.

Now he educates the public about the history of the United States and what freedom means to him.

“It’s something given to you by deceased people, so that you have that privilege in this country,” Keefer said.

Keila Hurtado, a recent graduate and teacher, has been fascinated by history since a young age. During the pandemic, she regularly visited the USS Hornet and learned from Keefer how to fold a flag.

“It was a very emotional experience for me. And also, while he was teaching me, I was sweating, making sure I got the bends right, and every time I was wrong; I was like, ‘Richard, what is happening?’ But he was really patient with me,” Hurtado said.

She is driven to get the perfect fold.

“For me, it’s very difficult because you have to do all the folds well. But I try to think about the people I love and the people who have served this country, in order to motivate me even more to succeed. I want to do it for them and for my loved ones too.

Usually the folding is done in the air with at least two people, or six on a grave.

Here’s what each fold means for the American flag, according to the National Flag Foundation: