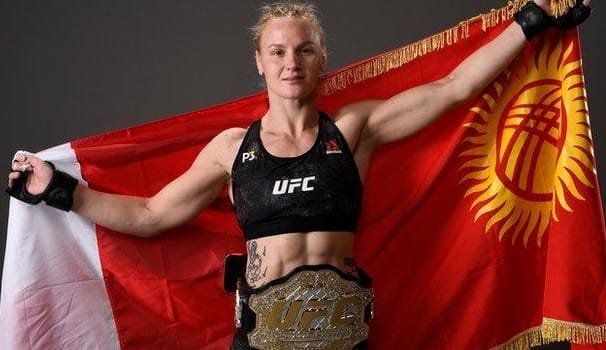 Why doesn’t self-proclaimed ‘Russian’ Valentina Shevchenko compete under the Russian flag in the UFC?

Valentina Shevchenko is a UFC flyweight champion who has embraced her martial arts journey every step of the way. She has traveled the world to master her skills in various forms of combat. With her global travel, she has embraced many cultures and learned several languages. But what flag(s) does she represent in the UFC?

Arguably the greatest fighter of all time, “Bullet” has lived in countries like Kyrgyzstan, Russia, Peru, Thailand and, of course, the United States.

Which country does Valentina Shevchenko represent at the UFC?

Valentina Shevchenko represents the flags of Peru and Kyrgyzstan in the UFC. His cornermen can often be seen holding the flags of these two countries behind “Bullet”.

Shevchenko was born in Kyrgyzstan. And his roots in Peru come from his extended stay in the country.

Shevchenko and his trainer went on tour to Peru, where they taught Muay Thai classes. Their popularity in the region grew at a rapid rate, which is why they continued to stay in Peru on what was originally a six-month tour.

Shevchenko also competed for a long time in Thailand. However, according to her, she does not represent Thailand as there are already several fighters raising the Thai flag. That said, Shevchenko said she definitely represented Muay Thai as a sport in her UFC fights.

Her victory over a decorated kickboxer, female boxer and former bantamweight champion in Holly Holm was a highlight of her stand-up skills and representation of Muay Thai.

What was Valentina’s background in her native country?

Since ‘Bullet’ was born in Kyrgyzstan, her journey to the top of the UFC began in her homeland.

‘Bullet’ and his older sister Antonia Shevchenko started training Muay Thai and kickboxing at an early age. Both found incredible success on the regional scene, so much so that they struggled to find opponents, which eventually led to them moving to other countries.

Even after achieving all the success in the UFC, Shevchenko has immense admiration for the Kyrgyz people.

Valentina Shevchenko has returned to her home country after achieving the ultimate feat in the UFC. And the reception she received was something she never imagined, coming mostly from humble beginnings.

How is Valentina Shevchenko related to Russia?

Although “Bullet” represents the flag of Peru and Kyrgyzstan in the UFC, its links also come from Russia. The UFC flyweight champion’s grandmother moved to Kyrgyzstan from Russia a long time ago, so she considers herself a “Russian,” she told MMAJunkie.

After starting her martial arts journey in Kyrgyzstan, she went to Russia at age 15. “Bullet” competed for three years in Russia, as she did not have frequent matchups in her home country of Kyrgyzstan.

While she gained valuable experience in Russia, she eventually moved to Peru, then also competed in Thailand, where she faced fellow UFC Joanna Jedrzejczyk in Muay Thai bouts, before settling down. in Las Vegas.

However, ‘Bullet’ does not miss an opportunity to go around the world. And with her aspirations to learn to fly on her own, like her sister Antonina Shevchenko, who is a licensed professional pilot, she could do so more often.